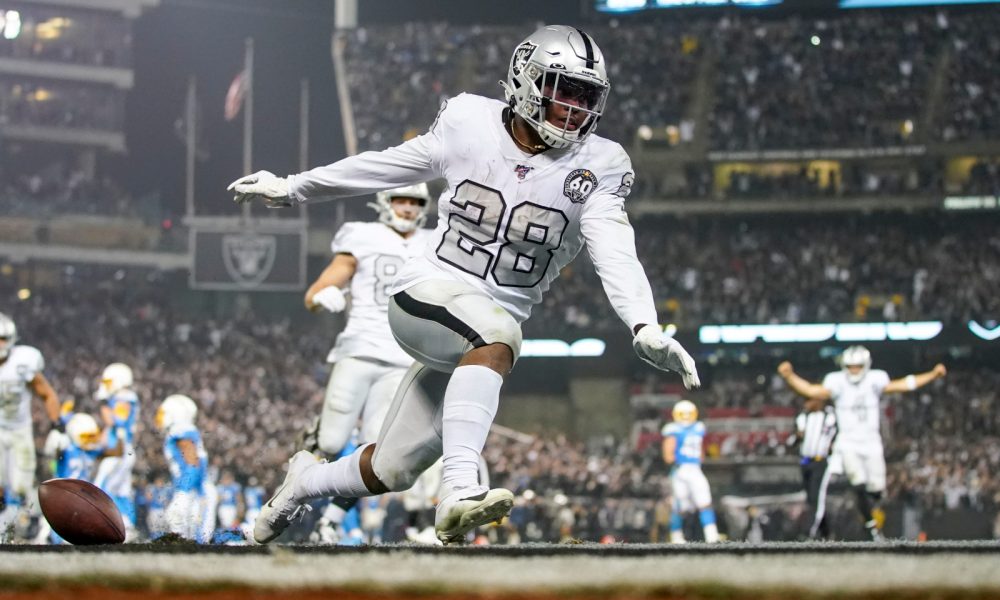 The lone time that Jon Gruden looked as happy as he showed on Thursday Night Football was his Super Bowl-winning season as head coach of the Tampa Bay Buccaneers in 2002.

After hugging and celebrating a win over the Los Angeles Chargers with Raider fans, Gruden probably needs to embrace Josh Jacobs next.

Since taking the former University of Alabama running back at No. 24 overall of this year’s NFL Draft, he has been an instant spark.

RELATED: Amari Cooper has Cowboys’ offense rolling after win over the Giants

He touched the ball 19 times versus the Chargers – totaling 71 yards rushing, 30 yards receiving and a critical touchdown in a 26-24 victory for Oakland. The 5-foot-10, 220-pounder chimed in with 4.4 yards per carry rushing and 10 yards per reception on five targets.

Three of his plays resulted in first downs or scores, while his 18-yard touchdown run had fans inside Oakland-Alameda County Coliseum going crazy.

With Jacobs as the focal point offensively, Derek Carr has been very efficient at quarterback. He did not turn the ball over against Los Angeles and has only thrown four interceptions (14 scoring tosses) through nine games. The former three-star from Oklahoma has the silver and black no longer being dysfunctional, but playing together.

Jacobs is fourth in the NFL in yards (811) and shares third-place in touchdowns (seven).

The versatility that made him special at Alabama has helped Carr, as the rookie totals 132 receiving yards on 14 catches. Oakland would be just on the outside if the playoffs started today; however, Jacobs has the franchise in striking distance.

He is widely regarded by most to be the league’s Offensive Rookie of the Year, upon the end the season.