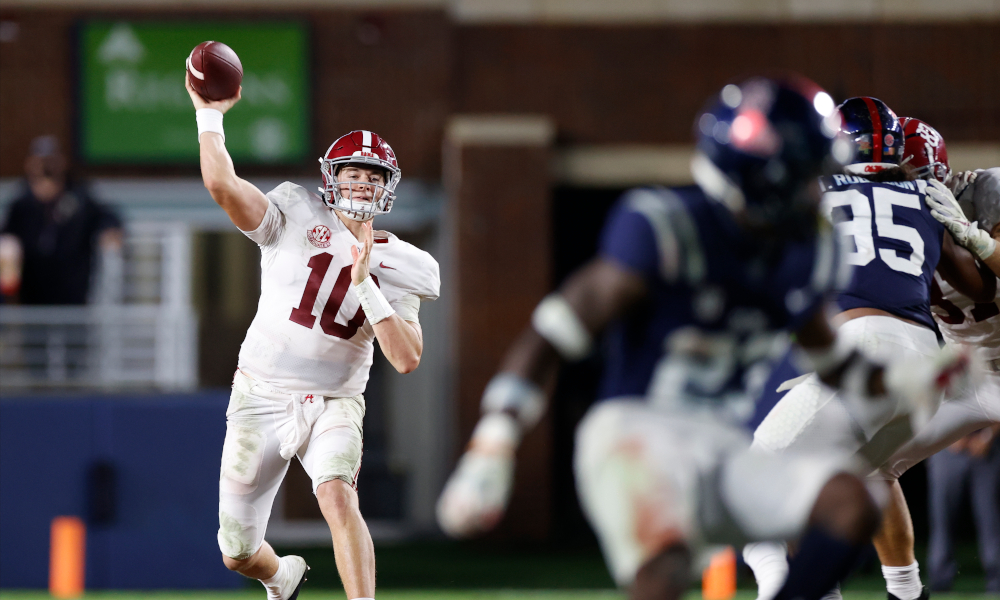 We have made it to awards season in college football, and typically Alabama is leading the charge.

On Wednesday, Nick Saban was added to the Paul “Bear” Bryant Coach of the Year watch list.

Two of his student-athletes would follow him as Mac Jones (quarterback) and William Anderson (outside linebacker) were named to watch lists for the Maxwell Football Club Foundation.

Jones, a redshirt junior, is being recognized as a candidate for the Maxwell Award.

Anderson, a true freshman from Hampton, Ga., had his name added to the Chuck Bednarik Award list.

Currently, Jones is the leader of this year’s Heisman race and is one of 15 semifinalists for the Johnny Unitas Golden Arm Award.

Since 1937, the Maxwell Award is presented annually to the player of the year in college football and it’s judged by a panel of sportscasters, sportswriters, NCAA head coaches and the members of the Maxwell Football Club Foundation.

The 6-foot-3, 214-pounder has the Crimson Tide on track to capture a Southeastern Conference title and punch its ticket for the College Football Playoff. Through six games, Jones has propelled Alabama to having the SEC’s top-ranked scoring offense (47.2 ppg) and No. 2 total offense (555.2 ypg). In both areas, the Tide ranks in the top-five nationally for college football.

He is second in the conference for passing yards (2,196), but Jones carries the SEC in completion percentage (78.5), passer rating (210.3) and total quarterback rating (95.6). He has tossed for 16 touchdowns to two interceptions, while leading the Tide to five straight 40-point games.

Jones is often compared to former Alabama quarterback, AJ McCarron, who won the Maxwell Award in 2013. Tua Tagovailoa accomplished the honor in 2018, and Derrick Henry won the award in 2015.

Anderson has been a big help with improving Alabama on defense.

With him, the Crimson Tide has allowed 13.67 points per game in its last three meetings.

He chimes in with 22 total tackles, three tackles for loss and four quarterback hurries (shares team lead). Listed at 6-foot-4 and 235 pounds, Anderson is in search of his first career sack.

He has come close throughout the season, but has found other ways to affect quarterbacks.

Since 1995, the Bednarik Award has been presented annually to college football’s defensive player of the year.

Alabama had a pair of players to win it in back-to-back seasons with Jonathan Allen (2016) and Minkah Fitzpatrick (2017), respectively.

Anderson has been effective all year, and hopefully he will grab his first sack versus Kentucky on Saturday.