For the third time since 2008, the Alabama Crimson Tide will take on a team from the Atlantic Coast Conference in the Chick-fil-A Kickoff week. The Tide took on Clemson in 2008 and won handily 34-10; they faced-off against Virginia Tech in 2009 and won 34-24. This season, Alabama will enter into the 2013 campaign as a two-time national champion led by quarterback AJ McCarron.

In his 25-year tenure at Virginia Tech, Frank Beamer has always had the Hokies positioned as the team to beat in the ACC. Since the move to the ACC in 2004, Virginia Tech has accomplished eight 10+win seasons and five BCS bowl appearances. Last season though was a different story. Behind the careless play of quarterback Logan Thomas and a struggling defense, the Hokies finished with a mediocre 7-6 record.  Offensively, Virginia Tech was 83rd in the nation in scoring, averaging 25.1 points per game. Defensively, under coordinator Bud Foster, the Hokies were 32nd in the nation in points allowed, surrendering 22.8 points per game.

Though Alabama is known for its defense, it was the Tide’s offense that sparked a buzz last season. The Crimson Tide was 12th in the nation in scoring, averaging 38.7 points per game. On the ground, Alabama was 17th in the nation, averaging 226.5 yards per game. It sounds silly to believe that one game can make or break your season, but for Virginia Tech this has become the notion.

For the second time, the Hokies will get the opportunity to take on Alabama and according to the boys in Las Vegas; the Crimson Tide is favored by almost a 20 point spread. Here’s a preview of how both teams stack up position wise.

a.       AJ McCarron (UA) – You can’t start a conversation on efficiency without putting McCarron in the mix. He got the job done well last season. His completion percentage, passing yards, touchdowns and quarterback rating improved from his first year starting. He completed 67.2 percent of his passes for 2,933 yards, 30 touchdowns and just three interceptions. He led the SEC and the nation last season in quarterback rating with 175.3. He is a 2x SEC Champion and 3x BCS National Champion.

b.      Logan Thomas (VT) – For those who know Thomas, they recognize that he is a mobile quarterback. Despite his height of 6 feet and 6 inches, Thomas throws better on the run and is more accurate when he is able to roll out of the pocket and survey the field. The difference between him as a freshman and last season was his weight. Thomas was 240 pounds as a freshman. He was able to make plays on the move and as a result, he passed for 3,013 yards, 19 touchdowns and led the Hokies to the Sugar Bowl. Last season, he put on 20 pounds (260 pounds) and it hurt his mobility. He became more of a pocket passer. This allowed defensive backs to read him and as a result he threw 16 interceptions.

a.       TJ Yeldon (UA) – Alabama has a slew of running backs, but Yeldon is the featured guy. He put on a show last season, as he tied the freshman record for touchdowns with 12 and rushed for 1,108 yards. In the first game of the season last year (Michigan), Yeldon rushed for 111 yards and a touchdown. Kenyan Drake, Derrick Henry, Jalston Fowler and a host of others will look to back him up.

b.      J.C. Coleman (VT) – Coleman had a decent, not great, but decent year last season as a running back. He rushed for 492 yards (off 109 carries) and two touchdowns. Though both of his ankles are sprained, he is listed as questionable for the opener against Alabama.

c.       Logan Thomas (VT) – The running game always seems to struggle a bit when the quarterback is doing most of the running. Case in point Logan Thomas. Last season, Thomas had the bulk of the carries for the Hokies. He rushed for 509 yards (off 174 carries) and nine touchdowns. Though these numbers are pretty good, Virginia Tech will not be successful against Alabama with having just Thomas pound the ball.

a.      Amari Cooper (UA) – This guy came out of nowhere last season and led the team in receptions. Cooper had 59 receptions for 1,000 yards and 11 touchdowns. Though he suffered a strained foot in summer camp, he will be ready to go against Virginia Tech. Along with Cooper, the Crimson Tide have a lot of weapons on the perimeter for McCarron to use. With a healthy Kenny Bell, DeAndrew White and Chris Black back, Alabama now has three deep threat receivers. Kevin Norwood has established himself as third down target.

Though the ACC schedule will determine their conference fate, Virginia Tech’s BCS hopes will ride on how they challenge the Crimson Tide. The Hokies don’t necessarily need to win either, if they can keep the game close, this will not only boost their confidence going forward, lower Alabama’s confidence and shock the world, but it will also cause a huge lump sum of money lost in Vegas.

For Virginia Tech to have a shot at this game, they must do five things exceptionally well.

1.      Logan Thomas must become a man and a leader. He has to use his athleticism to break down the Tide defense and make accurate throws.

2.      Virginia Tech has to control the turnover battle and limit penalties. They cannot help out a team that is favored to beat them by 20 points. The Hokies must be smart with the football offensively and attack it defensively.

3.      Virginia Tech has to rush for over 100 yards. The offensive line must create holes for J.C. Coleman to go up and down the field in order to stretch the Tide defense out.

4.      Defensively, the Hokies must pressure, knock down and sack McCarron multiple times along with preventing the Tide from amassing over 100 yards rushing.

5.      “Beamer Ball” has to be in full effect. Virginia Tech has to control field position.

If the Hokies can perform these five tasks well, this game may be closer than what many thought it would be. If they can’t, well the point spread will be exactly what Vegas has predicted and probably more. Virginia Tech has chance to make a statement, while Alabama wants to kill and keep on moving. The Chick-fil-A Kickoff Game will be on Sat, Aug. 31, 2013 at the Georgia Dome in Atlanta. 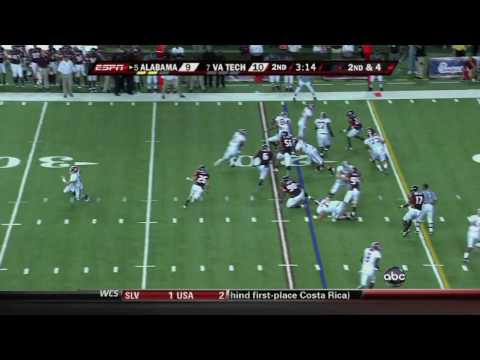