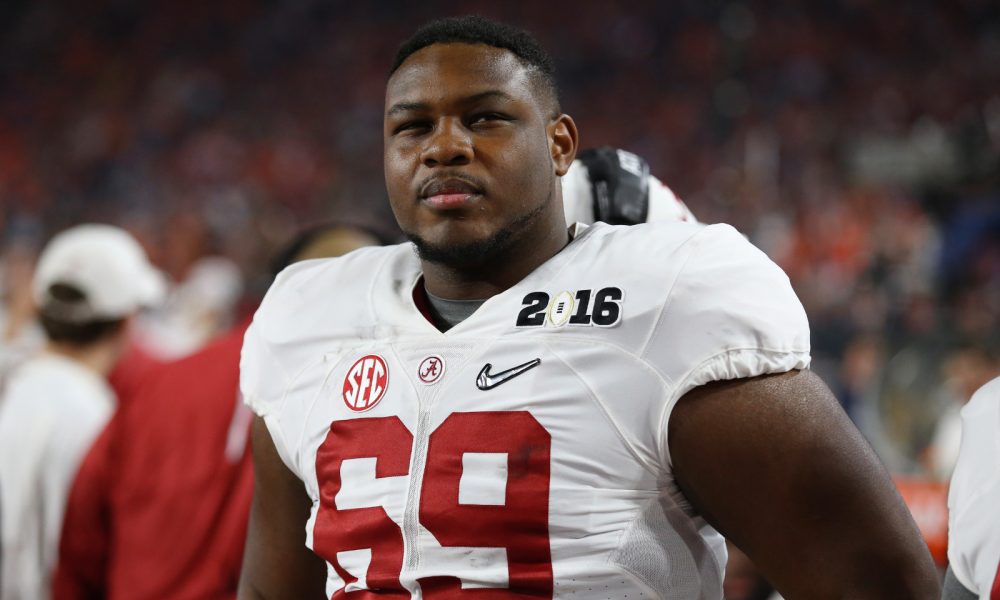 Former Alabama football player, Joshua Frazier’s, mother opened up about her son’s experience at the University of Alabama on Friday in a personal blog post, and the contents were beyond compelling.

Frazier played for Alabama from 2014 to 2018. The Arkansas native finished his career at the Capstone with 28 total tackles and was selected in the 2018 NFL Draft by the Pittsburgh Steelers.

In her post directed to Alabama recruits and parents, Donna Frazier spoke out against what she allegedly said happened to Joshua when he was injured, which lead to him having an addiction.

She began her criticism in the blog by discussing Alabama’s recruiting tactics during campus visits.

“Without question, you and your families have endured and sacrificed much throughout this journey,” Donna Frazier said in her blog. “Having grown wiser and stronger for being on this journey, I’d like to share with you what you can expect from this program as a player and as a parent or loved one. You should expect that this school will roll out the red carpet for you, but you will need to take extreme care that this carpet is not leading you directly into a ditch. And if it does, as it has for so many others, have a solid action plan in place for how to GET OUT!”

Joshua’s mother then spoke out against the way the program addresses injuries and used Tua Tagovailoa as an example.

“As far as this program is concerned, I believe it takes way too many risks with the bodies and minds of their players. Consider Nick Saban’s handling of the very seriously injured Tua Tagovailoa during this past season. Coach Saban demonstrated a lack of discretion and judgment by putting this young man in the game after he limped off the field against LSU just one week earlier. Although Tua clearly lacked the ability and mobility to avoid defenders effectively, he was put in the very next game which ended with him being carted off the field with a dislocated hip. Rather than give him the time needed to heal and prepare for the approaching NFL combine, which is/was his reported plan, his season has ended with a devastating injury and an uncertain future in football.”

She then went on to write about her son’s experience at Alabama during his sophomore year.

“Joshua Frazier fell prey to one of those very tactics during his Sophomore year when he was approached by his position coach one day after practice and coerced into taking Vyvanse, a very dangerous, Schedule 2 narcotic (amphetamine) which is a performance-enhancing drug accepted and allowed by the NCAA. This drug is highly addictive and has dangerous side effects which can include SUDDEN STOPPAGE OF THE HEART, PREMATURE AGING OF THE HEART, and even DEATH if abused or taken for extended periods of time.”

“At no time did any medical professional or staff member in this program notify me that my son suffered from any medical conditions that required the use of such a drug nor was Joshua ever encouraged to discuss anything with me before taking it. To put it simply, when I sent my son to the University of Alabama, he was healthy and drug-free. He graduated in just 3 ½ years with a degree in Communications and a wicked addiction to Vyvanse.”

Joshua was none too pleased with his mother’s verbal attack on the Alabama football program, and responded to his mother’s blog post via Twitter.

“My mother as you can see posted about me on her blog without my permission,” Joshua Frazier said via Twitter. “Yes, most of what she said in the article is true, but those are her words and not mine. The one, who I most trusted betrayed me and she will no longer have access to my life. The program does have issues, that I want to address with them privately, but my mom went ahead and published that article. I love my teammates more than anything and I wanted to do this silently as possible because there are good people that I have met and developed relationships in Bama in the time I had there. And this has nothing to do with the fans more so the program itself. I hope you understand I love Bama, just not the program I signed up to play for. Thank you to everyone, who helped me on my journey.”

Alabama football has not issued a statement in response to the blog post.

Wondering why Alabama is at No.13? Here’s the committee’s explanation
Tua Tagovailoa, Anfernee Jennings among permanent team captains for Alabama
To Top
%d bloggers like this: