For college football fans, the time has finally arrived. The game that has been hyped-up and categorized as the game of the year from summer to now is getting ready to take shape on Saturday, Sept. 14, 2013.

The Alabama Crimson Tide will enter the rematch against the Texas A&M Aggies as the No.1 team in the nation. With having a bye week to prepare, the offensive line of the Crimson Tide will look to redeem itself this week after the subpar performance against Virginia Tech.

For Texas A&M, they will enter the game with a 2-0 record, a quarterback that has become the face of college football and a very spirited crowd behind them. Though it’s early in the season, the Aggies are sixth in the nation in passing yards (392 yards per game) and fourth in scoring (58.5 points per game). Johnny Manziel has completed 70 percent of his passes for 520 yards and six touchdowns thus far. He is eighth in the nation and third in the Southeastern Conference in quarterback rating with a 193.0.

No Alabama fan wants to remember the heartbreak from last season. In 2012, Texas A&M strolled into Bryant-Denny Stadium in hopes to just compete with the Tide. The hope quickly turned to reality for the Aggies behind Manziel’s Heisman performance that shocked the Alabama faithful. He went 24-31 (77.4 percent of passes completed) passing for 253 yards and two touchdowns.  If his arm wasn’t good enough, Manziel aggravated Alabama on the ground too. He ran the ball 18 times for 92 yards and touchdown.

If there was one moment in the game that confused the Tide defense, fans at Bryant-Denny stadium and cemented Manziel’s name in the Heisman conversation, it was the play when Texas A&M was in the redzone and Alabama’s defense got pressure on Manziel. He bobbles the ball in the air, comes down with it himself, scrambles for five seconds and finds Ryan Swope in the back of the end zone for a touchdown.

Give Alabama credit for being resilient as they were able to claw their way back into the game after being down 20-0 in the first quarter, but it was too late and the Aggies pulled off the 29-24 victory against the Crimson Tide handing them their only blemish of the 2012 season.

However, this meeting will be different. Starting with the venue, Alabama will head to College Station (Kyle Field- Home of the 12th Man), Texas to face off against Texas A&M. With off-the-field issues he had this offseason, the only thing that is on Manziel’s mind is to keep the “Johnny Football” phenomenon going with a great performance and win against the Crimson Tide. This game provides sentimental value for both teams.

For Texas A&M, a win could really put their program on map, take them out of the shadow of the Texas Longhorns and put them as the cream of crop team in Texas. For Alabama, a win will add another notch in Nick Saban’s belt as far as rematch games are concerned and it will provide fans the opportunity to witness what the 2013 team can do.

Many factors will go into making this game as good as the advertisements have played it out to be. For right now though, let’s take a look at the impact players coming into this showdown.

a.       AJ McCarron (UA) – A lot of people and analysts have said that this is not a quarterback battle, but for McCarron it will be vital for him to come out fired up and ready to play. Last season, he witnessed Manziel outplay and embarrass him at Bryant-Denny Stadium. This time, McCarron needs to return the favor at Kyle Field in front of a hostile crowd. He cannot afford to make mistakes (two interceptions in this game last year) and turn the ball over. All McCarron will need to do in this game is be efficient, make the right reads, throw the ball on time and use his check downs wisely.

b.      Johnny Manziel (TAMU) – The one phrase that Manziel crucially needs to focus on is “Keep Your Composure.” He is a gifted and talented quarterback hands down, but if he doesn’t compose himself mentally in this game, he could cost his team a win. He will once again need to dial-up his athleticism and use his ability to create opportunities with legs. Last season, he was able to extend plays seconds longer than what they should have been by using his mobility. In doing this, his receivers were able to find spaces or holes in the defense and make the big plays.

a.      TJ Yeldon (UA) – Yeldon did not have a breakout game against Virginia Tech (only 74 yards rushing), but if the offensive line can provide a push and open up some lanes, he made have a huge game against the Aggies. The one thing that Yeldon has to be mindful of is when he makes his cutbacks. If the offensive line has opened up a huge hole for you, then hit the hole hard and fast. He only needs to cutback if he sees another hole or lane that is bigger than one the line made. Along with Yeldon, the supporting cast of running backs will need to run the ball well. Though there isn’t a confirmed number two back behind Yeldon right now, Alabama must still rotate backs and keep fresh legs on the field. This will disrupted the timing of the Aggies defense. Also, Yeldon and others will be pivotal in pass protect. They need to pick up blitzing linebackers, corners and defensive lineman and give McCarron time to throw the ball.

b.      Ben Malena (TAMU) – Last season in this game, Malena had 14 carries for 50 yards. The difference between then and now was Christine Michael was his backup and scored two touchdowns, now Malena will be called upon to carry the load. As far as size is concerned, Malena is short at 5-foot-9, 195 pounds, but he is very strong and a load for defenses to bring down. He may now wow you with speed and quickness, but he is a hard, downhill runner who can pick up tough yards. He had 138 carries for 808 yards and eight touchdowns in 2012.

a.      Amari Cooper (UA)- Though he struggled against Virginia Tech in the aspect of creating separation and getting open, one of Cooper’s best games last season was against Texas A&M. He had six receptions for 136 yards and a touchdown. Kenny Bell also had good game in the meeting against the Aggies last season as he totaled three receptions for 73 yards. Alabama has the most talented receiving core in the nation and it doesn’t take a rocket scientist to figure that out. They must create separation, run crisp routes and provide McCarron with a target to throw to against Texas A&M. Kevin Norwood must come huge on third down with his ability to locate marker and make the reception.

b.      Mike Evans (TAMU) – With Ryan Swope gone, Evans is now the leader of the receiving core. At 6-foot-5, 225 pounds, he is a physical presence and a hassle for defense backs to deal with. The thing that is impressive about him is his ability to high point the football and make the reception. Against the Crimson Tide secondary, Manziel will depend on him to find the holes in the zone make the big time plays. Last season, Evans pulled in 82 receptions for 1,105 yards and five touchdowns.

For defensive coordinator Kirby Smart, he has given the daunting task of keeping Manziel in the pocket to All-American linebacker CJ Mosely. Mosley’s role will crucial as he will have to spy on Manziel and make sure that he doesn’t pick up huge yardage on the ground. For Alabama’s secondary, the must play exceptionally well in coverage, they may need to disguise the coverage schemes to confuse Manziel and not allow receivers to get behind them.

For Texas A&M, their defense must come prepared to play in this game. Alabama was second in the SEC in scoring last season, averaging 38.5 points per game. Thus far, the Aggies defense has given 59 points combined in their first two games (29.5 points per game) and 449.5 yards of total offense. Both of these statistics have their defense second to last in the SEC.

Both teams will come live and ready to play, but it will be the team that stays composed, minimizes mistakes, controls the ball and converts the most on third down that will win this game. 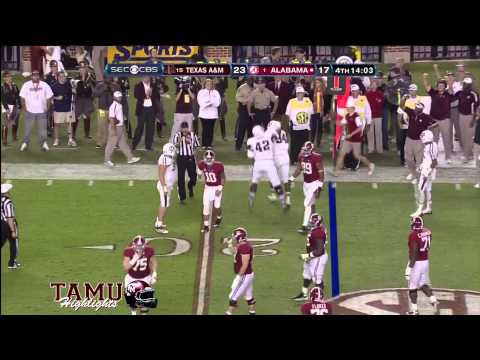