Aerial Attack [A+] – If the NCAA had a fantasy football league for one half, AJ McCarron would be among the first few quarterbacks to be selected. He had a great day spreading the football around to a variety of receivers. It was another day of handling business for him. He looked very comfortable and poised in the pocket and took advantage of every mismatch he could find. For the second game this season, McCarron did not turn the ball over. Statistics wise, McCarron was near flawless. He went 15-16 (93.7 percent of passes completed) passing for 166 yards and four touchdowns.

As far as Blake Sims is concerned, is it me or is this history in the making? Alabama fans have known Sims as a runner, but in the past two games he is starting to throw the football and is looking pretty confident with it. Sims had a phenomenal game spinning the magic bean in mop up duty for McCarron today. Like McCarron, Sims’s completion percentage was incredible. He went 14-18 (77.8 percent of passes completed) passing for 130 yards and a touchdown.

Offensive Line [A+] – This was the first non-conference game that fans were actually excited to see from the offensive line. Against Virginia Tech and Colorado State, the offensive line struggled coming out of the gate. Against Georgia State, they looked calm, cool, collected and ready to move the football. Alabama totaled 206 yards of offense against the Hokies and 338 yards of offense against Colorado State, but against Georgia State the Crimson Tide racked up 477 yards of offense. Alabama struggled to run the ball against Virginia Tech and Colorado State. In the matchup with the Panthers, the Crimson Tide amassed 181 yards rushing (TJ Yeldon-51, Derrick Henry-50 and Kenyan Drake-40) and a touchdown. Alabama’s offense achieved 31 first downs in the game and controlled the ball for 33:38.

Defense [A+] – Despite not achieving its second shutout, Alabama’s defense played well against Georgia State. The Panthers just happened to have a kicker (Wil Lutz) that was capable of nailing a 53-yard field goal. The Crimson Tide’s defense held Georgia State to 175 yards of total offense and just 15 yards rushing (0.7 yards per carry). Though Panthers’ quarterback Ronnie Bell completed 55 percent of his passes, the defense did not give up any big plays. Georgia State’s best receiver, 6-foot-3 Robert Davis, had just three receptions for 45 yards. The Crimson Tide allowed the Panthers just nine first downs. Alabama’s defense forced a turnover and was stingy on third down, allowing Georgia State just four conversions (4-12).

Receivers [A] – When you have two quarterbacks passing the ball fluently; it is truly a great day to be a receiver. The Crimson Tide’s receiving core witnessed this firsthand against Georgia State’s secondary as 15 players had at least one reception in this game. DeAndrew White is continuing to make an impact on the field. He had four receptions for 45 yards and a touchdown. Kenyan Drake and Christion Jones combined totaled four receptions for 45 yards and two touchdowns. With his touchdown reception, Jalston Folwer now has two on the season and for Chris Black, he is now starting to emerge for the Tide. He led the receiving core with six receptions for 54 yards and a touchdown.

For Georgia State, this was the second time they faced Alabama and though the outcome was no different, (63-7 in 2010) they can hang their hats on the fact that for the second time they weren’t shutout. The Panthers have a very young program (founded in 2010) and it was good for them to get some exposure. Though they leave Bryant-Denny Stadium with a 0-5 record, Georgia State will look to try to improve and have a positive season.

Despite not fulfilling the spread (57-point spread), a win is a win for Alabama. The offensive line is starting to buy into what Nick Saban’s been saying about the process and how the goal is to simply improve and execute well every game. They were able to put a man on a man and not only move the ball on the ground, but they gave their quarterbacks time to set their feet and have a wonderful day passing.

For the fourth game this season, the Tide’s defense showed up with their helmets on, chinstraps tightened and ready to play ball. Though they gave up 42 points to Texas A&M, they are only allowing 12.2 points per game this season.

With Amari Cooper battling a toe injury, White and Black have really stepped up for Alabama. Since returning from injuries, both receivers along with Jones have become huge targets for McCarron.

Most importantly, Alabama remains undefeated with a 5-0 (2-0 in conference) record and proved that they can be focused, play consistent and not get complacent. They must keep this same mindset as they go back into the SEC schedule next week against Kentucky. 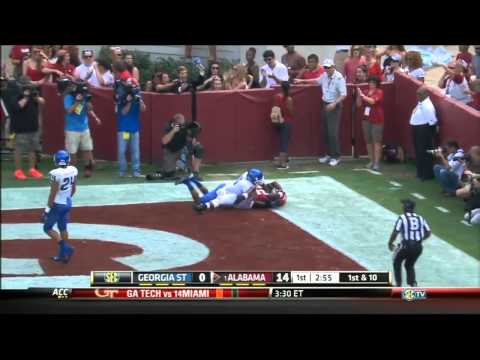