Despite the outstanding performance in gaining yards, both Yeldon and Drake still struggle with ball security. Both backs fumbled in the redzone. Just like Saban is a stickler for constant improvement and attention to detail, he is a stickler for ball security. He would rather have no gain on the ground and still keep possession of the ball than a huge gain on the ground followed by a fumble.

Receivers [B+] – Despite some dropped passes in the game, Alabama’s receiving core held its own. Kevin Norwood led all receivers with four receptions for 81 yards and touchdown. DeAndrew White just continues to get better and better each week. He totaled four receptions for 80 yards. After being missing in action and battling a toe injury, Amari Cooper was back on the scene. He had three receptions for 64 yards. Even Drake and OJ Howard got in on the action, combined they had five receptions for 81 yards.  For Kenny Bell, he was targeted a couple of times in this game, but couldn’t catch the football.

Defense [A+] – Did Alabama’s defense pitch a shutout? No, but they still played outstanding football against Kentucky. The Crimson Tide held the Wildcats to 170 yards of offense (76 passing and 94 rushing), 13 first downs and two third down conversions (2-12). Coming into the game, Alabama only had six sacks all season. Against Kentucky, the pass rush was substantial and the Tide’s defense racked up four sacks. The secondary did a fine job containing the Wildcats receivers. Outside of Javess Blue (two receptions for 44 yards and a touchdown), everyone else was a non-factor for Kentucky.

Offensive Line [A-] Alabama’s offensive line completely manhandled Kentucky’s defense. The thing that impresses me about them is they are continuing to grow and gel well together. The offensive line helped the Tide amass 668 yards of offense and 37 first downs against Wildcats. The last team to do that was Tennessee in 1997 (Peyton Manning-695 yards of offense). Alabama drove Kentucky off the ball and helped the backs total 299 yards rushing. The green on AJ McCarron’s jersey was not due to sacks; the offensive line protected him well in this game and gave him plenty of time pass the football. One thing the O-Line needs to work on more is concentration. Out of the seven penalties Alabama had, half of them were of the false start variety.

AJ McCarron [A] – It is amazing how ESPN analysts can still coin McCarron as just a “game manager,” despite the success he’s had. The truth of the matter is that he is a leader and a bonafied SEC quarterback. One thing I noticed in the game was when McCarron didn’t see anything available down field, he either threw the ball away or pulled it down and got positive yardage. He played fundamentally sound and didn’t force anything. Most importantly, he scanned the pocket well, made good reads and made the throws to his receivers. ESPN analysts joked about his ability to drive the ball down field; McCarron did a fine job in that aspect too. Statistics wise, McCarron had a career day. He went 21-35 (60 percent of passes completed) passing for 359 yards (career high) and a touchdown.

Once again, third down conversions were pivotal in this game. While Kentucky went 2-12 (16 percent), Alabama was 10-14 (71.4 percent) on third down. In order for the Crimson Tide to continue being successful this season, they must cut down on penalties. Alabama had seven penalties for 65 yards. Kentucky had six penalties for 50 yards.

Though Kentucky’s offense is nowhere near as potent as Mississippi’s, the fact remains that Ole Miss didn’t score on Alabama and Kentucky did. Freshman running back Jojo Kemp put the word out that the Wildcats would get one on the Crimson Tide, but if it wasn’t for Javess Blue getting open that wouldn’t have happened. Kemp needs to take Blue out to dinner because he was difference maker scoreboard wise for Kentucky.

For Alabama, the win wasn’t perfect. They had to overcome two turnovers and a lot of dropped passes, but in the end they got the job done. The Crimson Tide is 6-0 and the next mission is to prepare for the Arkansas Razorbacks. For right now, they will enjoy this 48-7 victory before its time to get back to work. 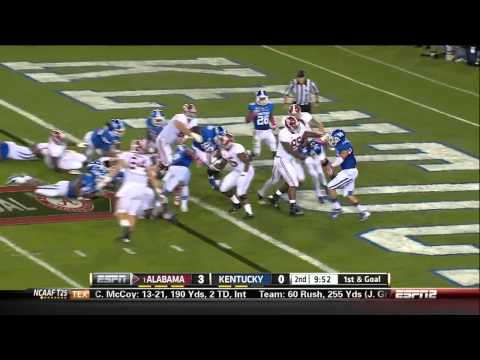