For the Crimson Tide, the last thing they want is a repeat of last season. After an emotional 21-17 victory against LSU in Baton Rouge, Alabama came in unfocused and drained against Texas A&M in Bryant-Denny Stadium. The Tide had some early mistakes and though it was a valiant effort on its part to get back in the game, Alabama ultimately loss 29-24 to the Aggies. The difference between this year’s team and last year’s team is that the leadership has grown and the veterans on this roster will look to rally the team around them and prevent de’ja’vu from happening.

Against LSU last week, the Crimson Tide showed how dominant the defense can truly be when the defensive line can generate a pass rush. Coming into the matchup against Alabama, Tigers’ running back Jeremy Hill had 128 carries for 922 yards and 12 touchdowns. The Crimson Tide held him to just 42 yards rushing off 13 carries and LSU as a whole to 43 yards rushing. Alabama’s defense sacked Zach Mettenberger four times and forced two critical turnovers.

Offensively, the Tide came to play. TJ Yeldon had a monster game on the ground. He totaled 25 carries for 133 yards (5.3 yards per carry) and two touchdowns. OJ Howard proved that despite his size, he does have pretty good speed. He along with Kevin Norwood and Jalston Folwer were on the receiving end of touchdown passes from AJ McCarron. Though the offensive line didn’t achieve 400 yards of offense, they really imposed their will against LSU’s defense in the second half.

As for Mississippi State, they have the joy of bringing the No.1 team in the nation to their hostile environment, Davis Wade Stadium (Scott Field). Despite a 4-5 (1-4 in conference) record, head coach Dan Mullen will have his players prepared to compete against Alabama. The Bulldogs fan base will be important in this matchup in the aspect of trying to throw off the Tide’s timing with crowd noise and shaking cowbells. Like Kentucky and South Carolina, Mississippi State has a two quarterback system. Both Tyler Russell (6-foot-4, 220 pounds) and Dak Prescott (6-foot-2, 230 pounds) are effective passers in the pocket when need be.

The difference is Prescott is more of an option type quarterback, while Russell is the typical pocket passer. With Prescott questionable for this game because of an elbow injury he suffered against Texas A&M, it may be up to Russell to gather the team around him and try to execute the perfect game plan offensively to keep the matchup close. Currently, Russell has 468 yards passing with three touchdowns and one interception. If Prescott is cleared to play in this game, he will come in with 58.4 percent of his passes completed for 1,542 yards, seven touchdowns and seven interceptions.

Prescott also leads the team in rushing. He’s totaled 111 carries for 722 yards (6.5 yards per carry) and 10 touchdowns. He has rushed for over 100 yards in four games (Auburn, LSU, Texas A&M and Bowling Green) this season. Senior running back, LaDarius Perkins must produce a good game on the ground if the Bulldogs desire to keep this one close. Thus far, he has 96 carries for 433 yards and two touchdowns.

Mississippi State does have some physical receivers that will look to give Alabama’s secondary fits and help Russell/Prescott in the passing game. At 6-foot-1, 225 pounds, Robert Johnson is a very capable receiver. He is a good route runner with great hands and is not afraid of making a catch in traffic. He has 27 receptions for 291 yards so far. Though he’s a freshman, De’Runnya Wilson will have to play like Mike Evans, if he wants to help the vertical passing attack annoy the Crimson Tide. With his height of 6-foot-5, 215 pounds, Wilson knows how to locate the football, shield the ball away from the defender with his body and he has great speed to along with it. He has 17 receptions for 249 yards and three touchdowns.

The most dynamic receiver in Mississippi State’s repertoire and the one player that Alabama must keep its eyes peeled on is Jameon Lewis. Despite his height at 5-foot-9, 195 pounds, Lewis is a game changer and a jack of all trades.  As a running back, Lewis has 13 carries for 117 yards (9.0 yards per carry) and three touchdowns. He has 39 receptions for 505 yards and four touchdowns as a receiver. He has even tossed three touchdown passes as a quarterback this season. Mullen will look to get the ball in Lewis’s hands early and often in this game because he’s a big play waiting to happen. Nick Saban, Kirby Smart and the Tide’s defense must game plan for him to try to keep him out of his element.

Since 2008, Alabama has won the last five meetings against the Bulldogs. The only thing that’s on Mullen’s mind is getting Mississippi State to a bowl game. The obstacle with that is he has to go through Alabama in his quest to help his team achieve that. The question now is will Alabama go into Starkville and handle business or will this be a repeat of Texas A&M game from last season? 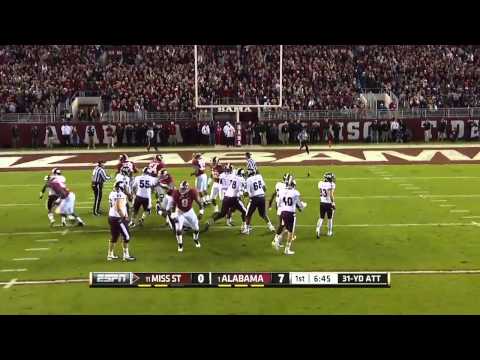