Its bowl season once again in college football. This is the final time in which teams can add one more win to their record and prepare for the next season.  For the Alabama Crimson Tide, this will be its seventh bowl appearance since Saban’s arrival. The BCS All State Sugar Bowl will air on Jan. 2, 2014 at 8:30pm ET and ESPN will air the matchup.

Alabama will enter the matchup against Oklahoma with an offensive line that has grown tremendously since week one. In eight games this season, (Texas A&M, Georgia State, Kentucky, Mississippi, Arkansas, Tennessee, Auburn and Chattanooga) the Tide has totaled at least 400 yards of offense. The Crimson Tide is 17th in the nation in scoring, averaging 38.8 points per game.

For AJ McCarron, this will be his final game in a crimson and white uniform. It will be the last time that he will operate under center as the leader and signal caller of the offense. Currently, he is completing 67.6 percent of his passes for 2,676 yards with 26 touchdowns and five interceptions. He will have the opportunity to end his career with 80 touchdown passes, if he tosses for five scores against the Sooners in the Sugar Bowl.

As for Kenyan Drake and TJ Yeldon, this game will be used as a spring board propelling them into their junior season. Both Drake and Yeldon have been highly productive for Alabama this season. Yeldon finished the regular season ranked third in the Southeastern Conference in rushing. He amassed 190 carries for 1,163 yards (6.1 yards per carry) and 13 touchdowns. Drake finished 12th in the SEC in rushing with 92 carries for 694 yards (7.5 yards per carry) and eight touchdowns.

Like McCarron, this will be the final game for Kevin Norwood as a member of the Crimson Tide. He was the leader of Alabama’s receiving core for much of the season. He has 36 receptions for 538 yards and seven touchdowns. Despite battling a toe injury for the majority of the season, Amari Cooper is now healthy and still managed to put up decent numbers this season. He has 36 receptions for 615 yards and four touchdowns.

While the Sooners may key in on Cooper and Norwood, they need to watch out for Christion Jones. His versatility will be crucial for the Tide in this matchup. As a receiver, Jones has 36 receptions for 349 yards and two touchdowns. On special teams, he has 39 returns for 830 yards and three touchdowns. DeAndrew White is third on the team in receiving and though he isn’t lightning fast, he is a very smooth route runner with deceptive speed. He has totaled 29 receptions for 395 yards and three touchdowns this season.

Chris Black and OJ Howard are productive receivers as well for the Crimson Tide. Like Jones, Black is very versatile and Howard has 269 receiving yards with two touchdowns this season.

After giving up 34 points to Auburn, Alabama’s defense dropped to second in the nation. Despite the loss to the Tigers, the Tide’s defense is still stingy allowing just 11.3 points per game. For CJ Mosley, this will be the final time that he will be the alpha dog of the defense. He leads the team in tackles (102) and plays with a lot of passion, intensity and instinct.

Though, Alabama’s run defense is giving up 108.3 yards per game (3.4 yards per carry), its only allowed seven rushing scores this season. On pass defense, the Tide has surrendered just nine scores through the air.

For the Oklahoma Sooners, they will enter this matchup representing the Big 12 in another BCS Bowl Game. In this showdown against Alabama, Bob Stoops has something to prove. In recent seasons, the resume for “Big Game Bob” in BCS title games/BCS bowl games has not been stellar. He will have the opportunity to rewrite history for Oklahoma against the Tide.

Oklahoma is led Blake Bell. At 6-foot-6, 252 pounds, Bell is a bulldozer and a load to bring down. Though he’s valuable to Oklahoma inside the red area, the question will be can he pass the ball effectively against Alabama’s secondary?  Thus far, Bell is completing 60.1 percent of his passes for 1,648 yards with 12 touchdowns and five interceptions.

Like the Crimson Tide, Oklahoma will have two backs suiting up for this game. Brennan Clay has had a productive season for the Sooners. He has 158 carries for 913 yards (5.8 yards per carry) and six touchdowns. Clay is a hard-nosed runner who isn’t afraid of running in between the tackles or bouncing to the outside. Damien Williams has produced a fine season on the ground for Oklahoma. He’s totaled 114 carries for 553 yards (4.9 yards per carry) and seven touchdowns.

One thing about Oklahoma is they can put up points. The Sooners are averaging 31.8 points per game. Alabama’s defense must dictate the tempo of the game from the start, if they want to dominate Oklahoma. Defensively, Oklahoma has struggled. The Sooners surrender 21.3 points per game. Oklahoma’s defensive line will be tested upfront to see if it can match the physicality of Alabama’s offensive line and pressure McCarron.

The team that produces the most first downs, possesses the ball more, minimizes mistake and make more big time plays will be the team that wins this game. Though Nick Saban wants to send this senior class out on a good note, he can’t afford to have the same flowers that occurred in 2008 haunt him again. After having a perfect regular season in 2008, Alabama lost in the SEC title game to Florida. They went into the Sugar Bowl unfocused with injuries, suspensions and they took Utah lightly. The Utes defeated the Tide 31-17.

This time, it’s the same scenario. Alabama will come into this Sugar Bowl with injuries (Anthony Steen-shoulder surgery) and suspensions (Xzavier Dickson and Alvin Kamara). McCarron and Mosley will have to get the team focused and prepared to play a great football game. 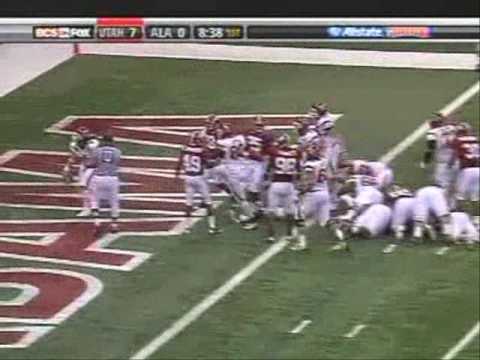