When the state of Alabama is mentioned in a conversation, it’s immediately followed by how great the Crimson Tide football team is. Though its gridiron game is remarkable, another venue at the University of Alabama is challenging football for supremacy.

Since 1979, Sarah Patterson has turned Alabama Gymnastics into one of the most watched events in college sports. She has posted a record of 384-88-2 and has guided this team to a bevy of awards, including 27 NCAA Regional Titles, seven Southeastern Conference Championships and six national titles.

What Patterson is to gymnastics, equals what Nick Saban is to football. In both sports, coaches need a player who can lead. They desire to have one player they can depend on to get the job done. For Saban, the player was AJ McCarron. As for Patterson, the leader is Kim Jacob.

While McCarron is a native of Mobile, Ala., Kim Jacob hails from Raleigh, N.C. Before coming to the Capstone, both players achieved greatness in school. McCarron was a magician with the football at St. Paul’s Episcopal High School. He passed for 6,066 yards with 66 touchdowns and nine interceptions for his career. He led the Saints to the 5A State Championship.

Though Jacob was homeschooled, her launching pad to success came through the Superior Gymnastics Club Team. Under coach Krystal Kramer, Jacob developed into a phenomenon. In the 2006 Junior Olympics, Jacob won the all-around, balance beam and floor exercise competitions.

Three years later, she won the uneven bars competition and finished second in the all-around at the 2009 American Classic. She qualified for the United States Visa Championships in 2008 and 2009, finishing 12th in the all-around in 2009.

McCarron and Jacob entered the University of Alabama with a desire to prove how good they were. As a freshman, McCarron struggled to find his place on the team. He had to learn how to become a leader and make the best of every situation. For Jacob, she proved she was as good as advertised. In 2011, Jacob became a First-team All-Around and Balance Beam All-American. She scored a career-best 9.95 on the balance beam in the NCAA Championships Super Six Team Finals.

In his first year starting (2011), McCarron battled Phillip Sims for the job. After securing the position, McCarron proved to Saban and company that he could handle the pressure of being an Alabama quarterback. He demonstrated poise, confidence and excellent decision-making skills. McCarron led the Tide to a 12-1 record and guided them to a 14th national title. He finished the season with 2,634 passing yards, 16 touchdowns and five interceptions.

As a sophomore, Jacob added two more elements to her repertoire.  She became a Second-team Uneven Bars and Floor Exercise All-American. Jacobs’s role as team captain grew as well. In all 14 meets, she competed in the balance beam and the floor exercise. Against Arkansas, Jacob scored a 9.9 on the balance beam and a 9.85 in the floor exercise against Florida. In the semifinals of 2012 NCAA Championships, Jacob scored a career-high 9.875 on the uneven bars.

In 2012, McCarron took on a leadership role. The struggles as a freshman paid off for him in his junior season. McCarron led the nation in passing efficiency (175.28 rating) and doubled his touchdown passes from the previous season. He led Alabama to a 13-1 record, an SEC title and its 15th national title. McCarron finished the season passing for 2,933 yards and 30 touchdowns. He was a finalist for the Johnny Unitas Golden Arm award and a semifinalist for other awards.

As a junior, Jacob was simply breathtaking.  Overall, she won a team-best 16 individual titles, including five in the all-around. She led Alabama with 50 routines in the competitive lineup with 22 scores of 9.9 or better.

Despite the losses to Auburn and Oklahoma, McCarron’s senior year was heroic to say the least. He put the team on his back and carried Alabama to an 11-2 season. In 2013, McCarron passed for 3,063 yards with 28 touchdowns and seven interceptions. The respect he longed for as a freshman and sophomore, McCarron got it as a senior. He took home the Maxwell Award and the Johnny Unitas Golden Arm Award. McCarron was the runner-up for the Heisman Trophy.

This season, Jacob hasn’t fallen off her game. Currently, she leads the Tide in the balance beam, uneven bars and floor exercise events. For many, the excellence stays on the floor, but for Jacob she carries the achiever mentality into the classroom. Since her freshman year, Jacob has been a Scholastic All-American.  As a senior, Jacob has maintained a 4.0 career GPA.

Both players have accomplished at Alabama. As McCarron pursues the NFL, he leaves Alabama with three national titles, two SEC titles and the Tide’s record holder in quarterback play. Now a senior at Alabama, Jacob has helped the Tide achieve two NCAA Regional Titles, an SEC title and two national titles.  She has been a winner on the floor and in the classroom.

Saban and Patterson taught both players how to show leadership, class and excellence on and off the field. McCarron and Jacob listened to what they said and it produced dividends for them. Alabama fans will always remember McCarron as the quarterback who guided the Tide back to prominence. Jacob will be as the gymnast who could do it all. The challenge for McCarron will be can he become the first Alabama quarterback to succeed in the NFL since Joe Namath? For Jacob, her eyes will be fixed on trying to accomplish one more title with coach Patterson. 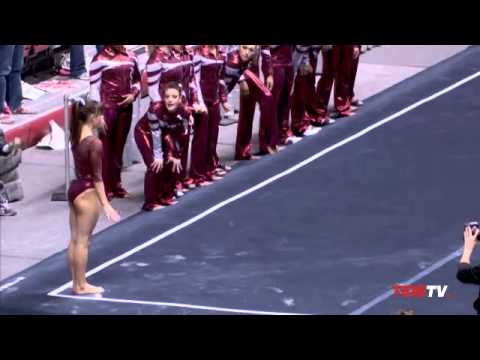