It’s better to address the media after a win versus a loss. Alabama’s head coach Nick Saban has managed to excel in this area since 2007.  In six seasons, Saban has posted a 78-15 record, including three national titles and two conference championships.

Though it’s not easy to dominate teams in the Southeastern Conference, Saban wears it well. Here is a list recapping some of the best wins for Alabama under Saban.

Best Wins in the Saban Era

Summary: Alabama vs. Georgia was the first game that Tide fans got to see what the 2008 recruiting class was capable of. Julio Jones put on a show against A.J. Green and Mark Ingram scored a touchdown on the ground. This game put Alabama football back in the national spotlight was the first building block toward the dynasty.

Summary: He was greeted with boos and animosity, but Saban was victories in first trip back to Tiger Stadium since his coaching days at LSU (2000-04). John Parker Wilson didn’t do much, but he did enough to win the game. Glenn Coffee and Julio Jones put in great numbers; however it was Rashad Johnson that stole the show. Johnson intercepted LSU’s quarterback Jarrett Lee three times, including a 54-yard interception returned for a touchdown.

Summary: Sometimes it’s good to be a little lucky and have the ball bounce your way. Jonathan Crompton and the Volunteers controlled the game. Offensively, Tennessee outgained Alabama 341—256.  It’s unlikely that a 400-pound man would be a hero, but don’t tell that to Terrence Cody. Cody blocked two Daniel Lincoln field goals. His second block made him a household name in Tuscaloosa. With 0:04 remaining in the game, Cody blocked Lincoln’s 49-yard field goal attempt. Alabama won the game 12-10 and rode the momentum by the fingernail into 2010 BCS National Championship Game.

Summary: Goliath [Tim Tebow] was gentle in this case, yet it was still a battle between David and Goliath.  In the 2008 SEC title game, Alabama loss to Florida 31-20. 2009 served as the Year of Redemption. This game had it all, from McElroy tight roping the sideline to Ingram gashing the Gators’ defense. Defensive back Javier Arenas put the nail in the coffin after intercepting Tebow’s pass in the endzone. Three things remained when the smoke cleared. Ingram became the clear cut Heisman winner, Tebow agonized in defeat and the Crimson Tide clinched its first conference title since 1992.

Summary: Two of the best coaches in college football battled for ultimate supremacy under the California sunset. With McElroy struggling, Ingram and Richardson took over. Both backs rushed for 100+ yards and two scores. Before the game, Dareus said to his teammates that he was going to get the MVP Award. He lowered the boom on McCoy in the first quarter. McCoy didn’t return and the Tide’s defense ran loose on Garrett Gilbert. With 0:03 remaining in the first half, Dareus intercepts Gilbert’s pass and takes it 28 yards for a touchdown. Alabama notched its 13th national title and first title since Gene Stallings and Paul Bryant.

Summary: After a 24-15 victory over the Tigers, the Tide went to Jordan-Hare Stadium to take on Auburn. Alabama got punched in the mouth early with trickery and deep passes, but the Tide hung in there.  With scores from Trent Richardson, Colin Peek and Leigh Tiffin, Alabama found itself down 21-20 in the fourth quarter. McElroy engineered a drive with a little over 7 minutes remaining in the game. The drive started with passes to Jones and ended with a 5-yard pass to Roy Upchurch in the endzone for a touchdown. The victory over Auburn helped the Tide punch its ticket into the 2009 SEC Championship Game.

Summary: Saban won’t admit it, but revenge was the calling card in the 2012 BCS title game. After losing to LSU 9-6 in the 2011 regular season, Alabama dominated the Tigers in the championship game. McCarron went from game manager to leader, Norwood became a clutch receiver, Shelley set a BCS bowl game record and the Tide’s defense allowed 92 yards to LSU. Alabama forced two turnovers and the Tigers crossed the 50-yard line once. The Crimson Tide and notched its 14th national title.

Summary: Everything is bigger in Texas. The Cowboys Classic was a grand event and Alabama showed up ready for it. McCarron did his job through the air and Yeldon racked up 100+ yards rushing in his debut. Alabama outgained Michigan 431—269 and the Tide’s defense intercepted Denard Robinson three times.

Summary: It was McCarron’s worst game statistically, but he got the job done. Lacy and Yeldon did damage on the ground, but it was Norwood who became the hero. He caught three passes on the final drive. His third reception helped set up a game-winning 28-yard screen pass from McCarron to Yeldon.

Summary: AJ McCarron emerged the victor in the battle against Aaron Murray. Lacy and Yeldon torched Georgia’s defense. Both backs recorded 150+ yards rushing. Amari Cooper shined on the big stage and sealed the deal with a 45-yard touchdown reception in the fourth quarter. McCarron won his first SEC title as a starting quarterback.

Summary: Before the game, Notre Dame had the No. 1 defense in the nation. After the smoke cleared, it was evident that Alabama’s offense was too much for them. McCarron’s aerial attack was crisp and the run game was dominant. The Tide secured its 15th national title and McCarron’s second as a starter.

Summary: Payback can be special. It was sweet for McCarron, but bitter for Johnny Manziel. Manziel embarrassed McCarron in 2012 at Bryant-Denny Stadium, but McCarron returned the favor at Kyle Field. Manziel was intercepted twice. McCarron had a flawless game and Yeldon did work on the ground. 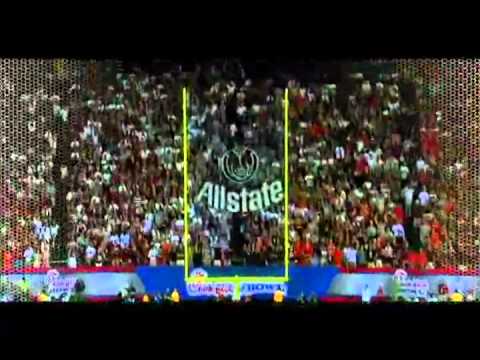