Most people shy away from it, but adversity is a good thing. It teaches us how to confront our fears and pursue our goals.  In sports, adversity instructs teams not to panic when they fall behind.

Resiliency separates good teams from great ones. When a program is able to overcome a deficit and steal victory away from its opponent, it shows the poise, focus and confidence of the team.

Alabama wouldn’t be a force in college football if it didn’t face adversity. Here is a list of the top 10 comeback victories in Crimson Tide history.

Summary: Tennessee controlled the majority of the game. Many fans had filed out of Neyland Stadium believing the contest was over. Alabama trailed Tennessee 10-3 late in the fourth quarter. Terry Davis engineered a drive in three plays. The drive went for 48 yards and ended with a touchdown. After a Volunteers turnover, Alabama scored on an 8-yard run by Davis. The Tide’s defense held its ground and Alabama won 17-10.

Summary: Alabama was known as the “Cardiac Crimson Tide” in 1995. The Tide witnessed a lot of close games, including its matchup against Southern Miss. The Golden Eagles led Alabama 17-3 at halftime. Brian Burgdorf guided the Crimson Tide back into the game. Alabama was balanced offensively in the second half and Burgdorf found Toderick Malone for the game-winning touchdown in the fourth quarter. Alabama won 24-20.

Summary: Despite three losses in 2010, Alabama showed its poise against Arkansas in Fayetteville. Ryan Mallet had everything clicking in the first half. The Razorbacks led 17-7 at halftime. The Crimson Tide trailed Arkansas 20-7 in the third quarter when Greg McElroy and the offense mounted its comeback. Scores from Trent Richardson and Jeremy Shelley cut the deficit to 20-17. Alabama’s defense intercepted Mallet three times. Mark Ingram scored the game-winning touchdown with 3:04 remaining in the fourth quarter. He finished with 157 rushing yards and two touchdowns. Alabama won 24-20.

Summary: Alabama took on Georgia Tech after handling Furman 51-0 in the previous week. Scores from Jimmy Nail, Thomas Wells (field goal) and Stanley Gann gave the Yellow Jackets a 15-0 lead at halftime. The Crimson Tide answered in the second half with 16 points. Leon Fuller scored on a one-yard touchdown run (missed extra point) and Bobby Skelton hooked up with Norbie Ronsonet on a three-yard touchdown pass. Alabama cut the deficit to 15-13 late in the fourth quarter. Digger O’Dell made a 24-yard field goal on the Tide’s final drive to win the game 16-15.

Summary: Alabama had to fend off more than Georgia in the 1994 season. After beating Georgia at home, the Crimson Tide faced Mississippi State at Scott Field in Starkville. The Bulldogs took a 25-15 lead into the fourth quarter. Alabama’s offense responded with 14 unanswered points and Jay Barker passed for 325 yards. The Tide’s defense held Mississippi State scoreless for the rest of the game. Alabama won 29-25.

Summary: Bryant-Denny Stadium was the venue for the showdown between Eric Zeier and Jay Barker. Zeier and wide receiver Hason Graham carved up Alabama’s secondary in the first half. Zeier passed for three touchdowns and Georgia led 21-10 at halftime. Barker returned in the second half with his best Joe Namath impression. Barker sprayed the ball to a variety of receivers, including Toderick Malone. Alabama narrowed the deficit to 28-26 late in the fourth quarter. Michael Proctor made the game-winning field goal for the Crimson Tide. Alabama won 29-28 and notched an SEC West Division title.

Summary: Alabama’s quest for an SEC title in 1989 was tested against Mississippi. The Crimson Tide fell behind 21-0 on the road in the first quarter. After Gary Hollingsworth found Kevin Turner for a touchdown, Alabama seized momentum and poured it on. The Tide scored 62 points in the game and recovered four Mississippi fumbles. Alabama won 62-27 and achieved a share of the SEC crown in 1989.

Summary: After defeating Clemson, No. 3 Alabama took on Tennessee at Neyland Stadium. Tennessee controlled the momentum for much of the game. Dewey Warren and Gary Wright guided the Volunteers to 10 points. Both teams went scoreless in the second and third quarter before Kenny Stabler erupted. In the fourth quarter, Stabler scored on a 1-yard touchdown run. His pass to Wayne Cook gave Alabama a successful two-point conversion.  With 3:00 remaining in the fourth quarter, Alabama trailed Tennessee 10-8. Steve Davis nailed a 17-yard field goal. The kick became the game-winner as the Tide defeated the Volunteers 11-10.

Summary: Bryant’s quest for a sixth national title didn’t come easy. The No. 1 ranked Crimson Tide struggled against the Volunteers early. Tennessee led 17-0 in the second quarter, but it wasn’t enough to prevent an Alabama comeback. Steadman Shealy and Major Ogilvie guided the Crimson to 27 unanswered points. Alabama’s defense held Tennessee scoreless for the remainder of the contest. Alabama won 27-17 and finished the season as SEC champions, Sugar Bowl champions and national champions.

Summary: A game is never over until the clock expires. LSU and its fans learned the hard way in 1998. Both teams failed to score in the first quarter, but LSU struck gold first before halftime. Kevin Faulk put the Tigers ahead with a one-yard touchdown run. LSU started to pull away in the third quarter. Herb Tyler connected with Kyle Kipps on a seven-yard touchdown pass and Chris Chauvin nailed a 20-yard field goal. Qunicy Jackson put Alabama on the scoreboard with a 53-yard touchdown reception from Andrew Zow.  The Tide’s defense stifled the Tigers in the fourth quarter. LSU was held scoreless and Shaun Alexander scored on a 21-yard touchdown reception. Trailing 16-14, Zow led Alabama on a huge final drive. It went four plays, 48 yards and ended on a game-winning 25-yard touchdown pass to Jackson. Alabama won 22-16.

Summary: The 1985 Iron Bowl was one of the most dramatic games in the rivalry’s history. Despite Alabama leading 16-10 after three quarters, the game had four lead changes in the fourth quarter. In the final minute, Mike Shula guided Alabama downfield with pin-point passes. Al Bell and others made huge plays to set up a 52-yard field goal for Van Tiffin. Tiffin nailed the kick and Alabama defeated Auburn 25-23.

Summary: Both teams looked focused after a scoreless first quarter. Georgia’s Aaron Murray hooked up with Jay Rome for a touchdown. Alabama responded with 10 unanswered points to end the first half. Georgia seized momentum in the third quarter as Todd Gurley scored on a three-yard touchdown run. The Crimson Tide found itself in an 11 point hole after Alec Ogletree returned a blocked field goal 55 yards for a touchdown. Eddie Lacy and T.J. Yeldon answered the bell with back-to-back rushing touchdowns. Trailing 25-21, Gurley came up huge again for Georgia. He ended the drive with a 10-yard touchdown run. Alabama was down 28-25 with 5:24 remaining in the fourth quarter. The Tide went on a four-play, 55-yard drive. Alabama ended the drive on 45-yard touchdown pass from AJ McCarron to Amari Cooper. The Crimson Tide won 32-28 and notched its 23rd SEC title. 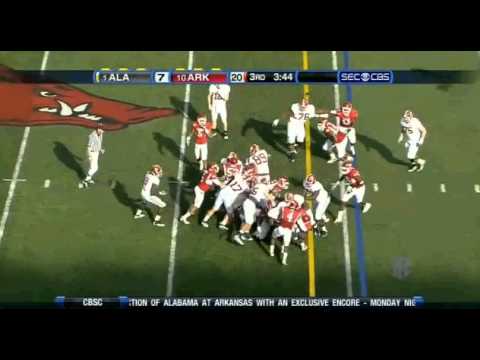