Draped in houndstooth apparel, mixed emotions swirled in Tuscaloosa when Sarah Patterson announced her retirement from Alabama Gymnastics on July 16, 2014.
Patterson’s legacy was simple, yet electric. Since 1979, Patterson stands as the lone coach that has tied Paul Bryant in national championships. She’s rarely mentioned in a lot of conversations, but Patterson built Alabama Gymnastics on passion, excellence and pride.
Football is a dominant sport in this culture, but in 36 years Alabama Gymnastics has held its own. Supported by her husband David, Sarah Patterson achieved her first Southeastern Conference title and national title with Alabama in 1988.
Patterson’s philosophy was to develop each person on the team. She said if you develop the whole person, not just the gymnast, the scores will take care of themselves. Under that idea, Alabama Gymnastics produced 71 athletes with 175 Scholastic All-American honors, including Diandra Milliner and Kim Jacob. Patterson coached 62 athletes to 277 All-American honors.
Alabama Gymnastics did more than win awards. Under Patterson, the program excelled in attracting an audience. Alabama holds the SEC’s single-meet attendance record (15,162) and single-season attendance average (13,786). The Crimson Tide brought in 106,643 fans in 2014.
Like Bryant, Patterson finished her career posting 300+ (384) wins and an 81.0 win percentage. Alabama Gymnastics was one of three programs that brought life to Tuscaloosa in 2011. After the tornado, the Crimson Tide won a national title and repeated as champions in 2012.
Like Pat Summitt, Patterson was a pioneer in women’s athletics. SEC Commissioner Mike Slive said Sarah is not just a great coach, but also a fabulous advocate for gymnastics and women’s athletics in the Southeastern Conference.
Alabama Gymnastics was great collectively, but Patterson guided the Tide to 25 individual NCAA titles and Kim Jacob was presented with the 2014 Honda Cup.
Patterson embodied the slogan “Built by Bama.” Along with gymnastics, Patterson supported football, basketball and softball. She was in attendance during the 2014 softball season and watched the Tide march to the Women’s College World Series. Patterson’s daughter, Jordan, was a member of the 2011 national championship team.
She is stepping down because of knee issues, but Patterson will be remembered as one of the greatest coaches and leaders in Alabama history. She and David Patterson are the only coaches with national titles in three different decades.
Patterson was inducted into the Alabama Sports Hall of Fame in 2003. The athletic department built the Sarah Patterson’s Champions Plaza in celebration of her career and six national titles. The plaza is located between Coleman Coliseum and Sewell-Thomas Stadium.
Patterson was hired by a houndstooth legend, so it is only fitting that she retires as a houndstooth legend herself. Here is a list of the accomplishments Patterson notched at Alabama: 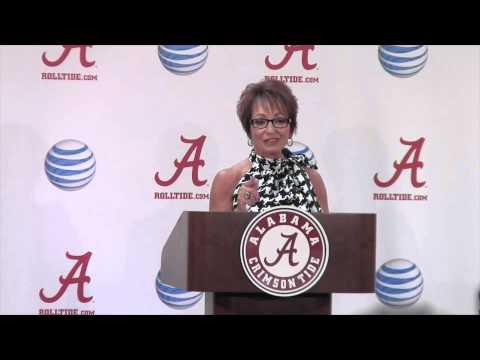