Starting true freshman provides a double-edged sword at any sport, but especially in college football. In recent years, freshmen were expected to be redshirted and learn the playbook. With social media evolving and high schools producing huge talent, more and more freshmen are starting to see the field quicker.

This offseason was productive for Alabama as it lined up 27 commitments. Of the 27 players, many of them were four-star prospects. Though fans would love to see all 27 players participate in 2014, only the ones that have put in the work will see the field. Here is a list of the top 10 freshmen to look out for in this upcoming season.

Summary: Alabama lacked depth on the defensive line in 2013. Bringing in Frazier in the 2014 recruiting cycle provides a fresh body in the rotation. Frazier is a four-star prospect. 247 sports ranked him as the No.6 defensive tackle and the No.1 player in Arkansas. Frazier recorded 65 tackles (7.0 tackles for loss) and 3.5 sacks in 2012.  He is a keen pass rusher who can also fill in gaps to stop the run.

Summary: Everyone talks about Jacob Coker, but Cornwell was a huge piece in the 2014 recruiting class. A former Elite 11 finalist, Cornwell entered the University of Alabama as one of the top pro-style quarterbacks in the nation. He was ranked as the No.4 pocket passer nationlly according to ESPN 300. Despite a knee injury, Cornwell tossed for 2,742 yards and 27 touchdowns in his junior season. He has a talented arm, but Cornwell can aggravate defenses with his mobility. He rushed for 755 yards and six touchdowns at Norman North High School. He may not play a lot this season, but if given the opportunity, Cornwell could surprise a lot of people.

Summary: Being an early enrollee has helped Hamilton learn the system. Before graduating Valedictorian of Carver High School, Hamilton displayed exceptional instincts on the field. In his senior season, Hamilton totaled 119 tackles, four sacks, three interceptions, six forced fumbles and a blocked punt. With losing CJ Mosley and Tana Patrick to the National Football League, Alabama will have to cross train players for inside linebacker. Hamilton may be one of the players cross-trained. Aside from instincts, Hamilton is a hard-hitter who can also cover running backs and receivers.

Summary: For the first time since Courtney Upshaw and Marcell Dareus, Alabama may finally have its big time pass rusher in Da’Shawn Hand. Both Rivals and 247 Sports ranked Hand as the No.1 strong-side defensive end in the nation. He tallied 56 sacks and 259 tackles in his tenure at Woodbridge High School. Hand has quick hands and explodes off the ball. He displays an array of pass rush moves and can contain the outside on run plays. It may be little opportunities for him this season, but down the stretch keep your eyes on Hand.

Summary: Jones hasn’t even played a down of Alabama football, yet people are starting to compare him to former Crimson Tide safety, Mark Barron. Like Cameron Robinson and Cameron Sims, Jones hails from Louisiana. A former consensus four-star recruit, Jones was ranked as the No.3 safety by ESPN and the No.4 safety according to Rivals.com. He has great on ball instincts, but excels at delivering punishing hits. Learning from Landon Collins, Nick Perry and Jarrick Williams will help Jones develop his game more.

Summary: Not many receivers get to shine for as Alabama as freshmen, but Sims is one of few that will. He’s gotten better acquainted with the team and system since enrolling in January. Sims has great hands and displays body control. He isn’t a speed demon, but he is a precise route runner. Watching Amari Cooper, Christion Jones and DeAndrew White has really made an impact on Sims. A former four-star prospect, Sims caught 39 passes for 948 yards and eight scores as a junior in 2012. He averaged 24.3 yards per catch during the period.

Summary: His father, Bobby Humphrey, was a star running back at Alabama. Now, it’s Marlon’s turn to make a name for himself as a cornerback. Like Tony Brown, Humphrey was a dual-sport athlete at Hoover. In football, Rivals.com ranked Humphrey as the No.2 cornerback and the No.1 player in Alabama. He finished his career at Hoover with 77 tackles, 31 pass breakups, 13 interceptions and three touchdowns. Humphrey ended his high school career as one of the top track athletes in the nation. He won seven Alabama State Championships across the indoor and outdoor track seasons in 2013. Unlike Brown, Humphrey didn’t enroll early at Alabama. He will see the field this season, but is battling for a starting spot right now.

Summary: Evans turned Auburn on its head when he donned an Alabama hat on national signing day. 247 sports listed Evans as the No.1 outside linebacker and No.2 player in Alabama. ESPN 300 ranked him as the No.4 outside linebacker nationally. In his senior year, Evans collected 77 tackles (43 tackles for loss), 17.5 sacks, five pass breakups, three forced fumbles, a blocked punt and a fumble recovery. He’s impressed teammates and coaches so far in camp and teammate Reggie Ragland said Evans is a “stud.”  Of the linebackers Alabama recruited in the 2014 cycle, Evans will receive the most playing time in 2014.

Summary: Size can’t be coached in college football. The average cornerback is 5’9,” Brown exceeds that weighing in a 6’0.” A former five-star prospect, Brown excelled at football and track. He finished his career at Ozen High School, recording 191 tackles, 31 pass breakups, four interceptions and a fumble recovery. In 2013, Brown won the Texas Class 4A state championship for his time in the 110-meter hurdles (13.40). He is not only fast, but Brown also has great on ball skills. Enrolling early has helped Brown get familiar with the system. He collected an interception in the 2014 A-Day Game and looks to start at cornerback for Alabama in the opener against West Virginia.

Summary: Like Andre Smith, DJ Fluker and Cyrus Kouandjio, Robinson is next in line to handle the task of playing left tackle for the Crimson Tide. It may seem nerve wrecking having a true freshman start on the offensive line, but the potential of Robinson is positive. A former five-star prospect, Scout.com ranked Robinson as the top offensive tackle in the nation. ESPN rated him as the No.1 offensive tackle and No.2 player in Louisiana. Robinson has received nothing but praise from teammates and coaches. Since enrolling in January, Robinson has progressed well. He’s exploding off the ball and locking up at the point of attack. 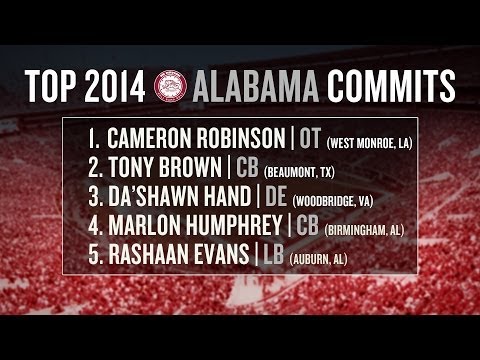