Since 2011, Alabama has had a set player at the quarterback position. As a three-year starter, AJ McCarron exuded toughness, confidence and leadership. He ended his tenure with 9,019 passing yards and 77 touchdowns. With McCarron in the National Football League, the Tide faces a new challenge.

Many Crimson Tide fans were up in arms this offseason when Florida State transfer, Jacob Coker decided to come to Alabama. Before leaving the Seminoles, Coker got in nine games of mop up duty. He completed 51.2 percent of his passes (21-41) for 295 yards with one touchdown and one interception, until a knee injury sidelined him for the rest of the 2013 season.

Coker looks impressive in week two of fall camp. At 6’5” 240 pounds, Coker displays a strong arm and mobility in the pocket. Nick Saban said Coker is a hard working player and that he’s starting to develop chemistry with the team.

Some believed that Coker’s decision to join Alabama would force Blake Sims to roll over; however, it’s pushed Sims to come out stronger.

Sims has been doubted throughout his career.  The debates have ranged from questioning his mechanics as a passer to his abilities in leading Alabama’s offense. Now a senior, Sims enters his third season vying for the starting job.

Sims started his career as a running back. He played in five games and rushed for 107 yards in 2011. In 2012, Sims transitioned from running back to quarterback. Behind McCarron, Sims played in 10 games. He rushed for 187 yards with two scores and passed for 77 yards.

Sims saw playing time in 8 games last season, but he improved as a passer. He completed 62.1 percent of his passes (18-29) for 169 yards and two touchdowns. Sims’s finest performance was against Georgia State. He went 14-18 passing (77.8 completion percentage) for 130 yards and a touchdown.

The lone issue with Sims is that he hasn’t received a lot of playing time. It’s difficult to get into the flow of an offense when an individual is in for just a few plays at a time.

The matchup against Georgia State last season was the longest time Sims has played. He played an entire half against the Panthers and Tide fans were able to see what he could do.

Coach Saban and company didn’t use the entire playbook in Alabama’s spring game. Despite his struggle, the Tide didn’t focus on Sims’s strengths.

Unlike most college students, Sims didn’t party a lot over spring and summer break. Instead, he attended some quarterback camps to improve on his mechanics. Sims put on some muscle this offseason and has been going stride for stride with Coker since camp started.

Saban didn’t release any quarterbacks stats after Alabama’s first scrimmage because of weather conditions. If Coker doesn’t distance himself from Sims in Saturday’s scrimmage, expect Sims to start against West Virginia.

Here are four reasons why Sims should start at quarterback for Alabama in 2014.

Summary: Mechanics and techniques can be taught, but experience can’t. Blake Sims is a redshirt senior. He’s been in the system four years. Sims knows the offense, coaches and players. He’s been a part of two national championship teams.

Summary: Coker is building chemistry, but Sims already has it. According to Saban, the players love Sims and have respect the way he’s competed. It’s something special about off the field chemistry that leads to gridiron success. Sims has that bond with his teammates from the offensive line to the receivers.

Summary: Being involved in quarterback camps has helped Sims a lot. His confidence has grown and his footwork in the pocket looks fluent. Sims has developed a tighter spiral on the football. He’s working through his progressions well in fall camp.

Summary: We were taught perseverance as children, but it has to be practiced throughout life. Former Elite 11 finalist, Star Jackson was a prominent part of Alabama’s 2008 recruiting class. Despite his talents, Star transferred to Georgia State in 2010. In 2011, Phillip Sims came to Alabama to compete for the starting job.

Sims was viewed as a “can’t miss” player because of his arm strength and mobility. After early struggles, Sims transferred out.  Last season, Luke Del Rio was always huddled around McCarron and Saban. It was rumored that he would be McCarron’s successor, until Coker signed his letter of intent. With Del Rio (Oregon State) and Parker McLeod (Western Kentucky) both gone, Blake Sims stands as one of few quarterbacks that has stood the course.

He hasn’t played a lot, but Sims has developed comradery on this team. Many things can be coached, but chemistry and leadership can’t be. Those two aspects come with experience.

Coker has Sims beat when it comes to size, arm strength and overall potential, but he has to show it in Alabama’s second scrimmage. The Crimson Tide plans on being a run heavy team, but this Saturday separates Coker or Sims from starting against West Virginia. If Sims keeps it close, don’t be surprised if No.6 in crimson and white suits up first against the Mountaineers in Atlanta on Aug. 30. 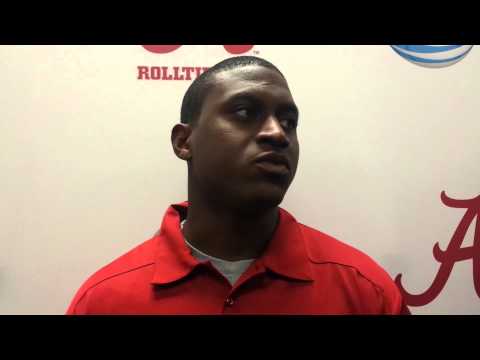