Everyone wants the bigger, better deal. Whether it’s Nike vs. Adidas, Coke vs. Pepsi, or even McDonald’s vs. Burger King, people pride themselves on having the best.

Many scenarios are in play heading into Alabama’s matchup against West Virginia Saturday, but the main one lies in a quarterback competition.

Clint Trickett and Jacob Coker have two things in common. Both quarterbacks play in a power five conference and both are Florida State transfers. Despite some similarities, the quarterbacks differ in playing styles.

Trickett, weighing in at 6’2” 180 pounds, is a pro-style quarterback. He’s a natural pocket passer who surveys the field with his eyes.  In two seasons (2011-12), Trickett collected 947 passing yards with seven touchdowns and four interceptions as a backup at Florida State. He isn’t known for his mobility, but Trickett knows how to move his feet in the pocket and anticipate a blitz.

Coker entered Alabama this offseason as one of the most hyped transfers. At 6’5” 230 pounds, Coker has a strong arm and is very mobile in the pocket. He’s a dual-threat quarterback that backed up EJ Manuel and Jameis Winston at Florida State. Coker tossed for 295 yards with one touchdown and one interception in nine games of mop up duty.

While potential sides with Coker, experience resides with Trickett.  In 2013, Trickett was West Virginia’s starting quarterback. He recorded 1,605 passing yards with seven touchdowns. Coker got his feet wet in mop up duty with the Seminoles, but a knee injury sidelined him for the remainder of the 2013 season.

Trickett may have the experience, but Coker will have the play makers on his side. Regardless of if he starts or not, Coker will see the field against the Mountaineers. With Lane Kiffin calling plays and a host of talented receiving targets, Coker has an opportunity to get comfortable and acclimated in Alabama’s system.

West Virginia is no longer in the Big East, but Dana Holgerson is still the head coach. A former Mike Leach disciple, Holgerson operates a no-huddle, up tempo offense. The Mountaineers don’t have marquee names in its receiving corps, but Holgerson will put talent on the field for Trickett to work with.

A healthy Amari Cooper is great for Coker’s development; however, it’s even better when Christion Jones, DeAndrew White, OJ Howard, Chris Black and others are added to the list. He had a shaky start, but Cooper finished strong last season. He recorded 45 receptions for 736 yards and four touchdowns. White, Howard and Jones combined for eight touchdowns and 1,152 receiving yards in 2013.

Alabama has the better team and on paper Jacob Coker is the better deal, but don’t count West Virginia out of the conversation. The Crimson Tide has to bring is A game against the Mountaineers. West Virginia is going to air the ball out and it will look to put points on the scoreboard.

It’s the Southeastern Conference against the Big 12. We have two offensive minds in Lane Kiffin and Dana Holgerson going head to head in Atlanta. Who’s the better deal between Coker and Trickett? Saturday’s primetime matchup under the lights will tell us. 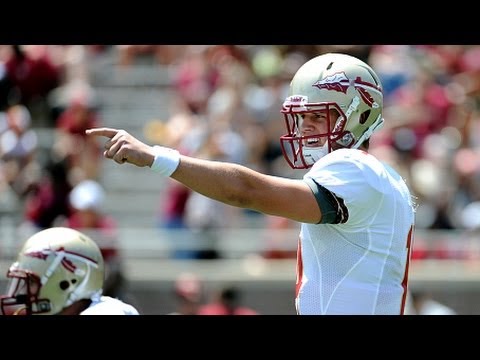