Fans inside Vaught-Hemmingway Stadium will have something to cheer about Saturday, as Mississippi looks to defend home field against Alabama.

The Crimson Tide was off last week, but worked on fundamentals in preparation for Mississippi.

Blake Sims is second nationally, behind Oregon’s Marcus Mariota in completion percentage. Sims is completing 73.2 percent of his passes for 1,091 yards, 10 touchdowns and two interceptions. He’s driving the ball down field and is leading with confidence.

T.J. Yeldon hasn’t had an explosive season, but looks to produce against Ole Miss. He’s collected 57 carries for 284 yards and two touchdowns.

Amari Cooper is third on the Heisman ballot and for good reason. He continues to grow as a leader. Cooper has equaled his output from 2013 (45 receptions, 736 yards, four touchdowns), totaling 43 catches for 655 yards and five touchdowns. He’s averaging 163.8 yards per game. Cooper’s route running has improved. His chemistry with Sims gets stronger with each week.

He missed two week because of a shoulder injury, but DeAndrew White made his presence felt against Florida. The senior caught six passes for 48 yards. White has 12 receptions for 121 yards this season.

OJ Howard was quiet in the first three games, but made the stats column against Florida. He caught two passes for 22 yards. Howard, Christion Jones (137 yards) and Chris Black (58 yards) are play making receivers, but all three need to get more involved in the offense.

Landon Collins anchors Alabama on defense. He has 32 tackles, one interception and two pass breakups. Reggie Ragland leads all linebackers with 19 tackles. He also has a sack, two fumble recoveries and a pass breakup.

Mississippi was in a dog fight with Memphis, before pulling away 24-3.

Senior quarterback Bo Wallace continues to struggle with ball placement. He threw for 248 yards and two touchdowns, but also tossed two interceptions. Wallace is completing 71 percent of his passes for 1,271 yards, 11 touchdowns and six interceptions. He should be playing to his potential, but Wallace’s mechanics are still a work in progress.

Jaylen Walton is the Rebels featured running back. He’s averaging 6.9 yards per carry. Walton’s recorded 199 yards rushing and three touchdowns. He is shifty back, but runs with power between the tackles.

I’Tavius Mathers is Mississippi’s change of pace back. Mathers is small vision, but he has vision and runs with a lot of power. He has 31 carries for 151 yards and two scores.

Laquon Treadwell is the lone marquee receiver Mississippi has. He’s a big body, at 6’2” 229 pounds, who can high point the ball. Treadwell has 20 catches for 307 yards and three touchdowns.

Treadwell is the big name, but Cody Core leads all receivers in touchdowns with four. Core is 6’3” 196 pounds. He excels at making catches in traffic and is a keen route runner.

Vince Sanders is another game-changing receiver. He’s a bit smaller, at 6’1” 185 pounds, but Sanders has great leaping ability. Treadwell and Core are possession receivers. Sanders is a speed demon. He has 18 catches for 261 yards and two touchdowns.

Ole Miss did its talking through Twitter. Alabama handled business on the field. The Crimson Tide shut out the Rebels 25-0 inside Bryant-Denny Stadium.

Cody Prewitt took a page from Wallace’s book Sunday. Prewitt took to Twitter in his attempts to talk up Mississippi’s game against Alabama. Prewitt said the Rebels are better than what they have been.

“We understand that we haven’t played a team that’s going to be as good as Alabama,” Prewitt said. “But we [Ole Miss] don’t really think Bama is as good as they have been.”-Prewitt via Twitter

Alabama and Mississippi have met 61 times. The Crimson Tide leads the series 47-9-2. Alabama has won 10 straight meeting, dating back to 2004. 2003 was the last year Ole Miss defeated Alabama. Eli Manning was the quarterback. Mississippi won 43-28 in Oxford, Miss.

Alabama embarrassed Mississippi in its last visit to Oxford in 2011. AJ McCarron tossed for 224 yards and Trent Richardson had a field day. Richardson totaled 183 yards rushing and four touchdowns. Richardson’s 76-yard touchdown run in the third quarter put him in the Heisman race. Alabama’s defense forced two turnovers and surrendered 141 yards of offense.

The Crimson Tide won the contest 52-7.

Here is a table breaking down how both teams stack up against each other. 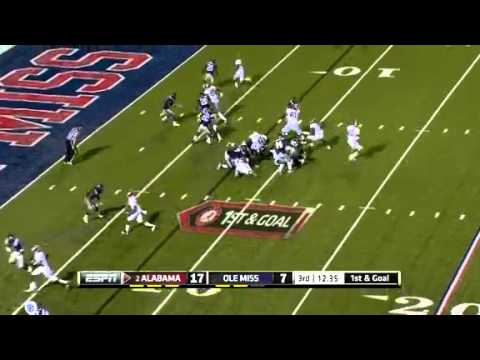