Bryant-Denny Stadium is the venue this week, as Alabama returns home after two straight road games. It wasn’t easy, but the Crimson Tide is 5-1 after its 14-13 victory over Arkansas. Alabama’s defense played well, but its offense has to mature quickly before Saturday’s showdown against Texas A&M.

The magnolia state has cooled Texas A&M down after its 5-0 start. Losses to Mississippi State and Ole Miss have the Aggies on edge for Saturday’s matchup against Alabama.

He’s not Johnny Manziel, but Kenny Hill has been potent through the air this season. He’s completing 66.8 percent of his passes for 2,511 yards with 23 touchdowns and seven interceptions. Five of Hill’s seven interceptions came against Mississippi State and Ole Miss. Both teams made Texas A&M’s one-dimensional and forced Hill to make bad decisions.

The Aggies will look to maintain balance on offense against the Crimson Tide. Trey Williams leads all backs with five touchdowns and 301 rushing yards. Tra Carson has four touchdowns and is averaging 5.1 yards per carry. Carson has 54 carries for 273 yards. James White and Brandon Williams combined have five scores. White has 138 yards rushing. Williams has 188 rushing yards.

Texas A&M’s strength offensively is at receiver. Outside of Speedy Noil (5’11”) and Malcolme Kennedy (6’0”), the Aggies’ receiving corps average size is 6’4” and taller. Josh Reynolds leads the group with 29 receptions for 476 yards and eight touchdowns. Edward Pope has 23 catches for 399 yards and four scores. Speedy Noil has totaled 27 receptions for 360 yards and three touchdowns. Ricky Seals-Jones has recorded 37 catches for 377 yards and three scores. Malcolme Kennedy has collected 33 passes for 378 yards and two scores. Texas A&M’s receivers do a great job of creating separation, locating holes in the secondary and high-pointing the ball.

A return to Bryant-Denny Stadium may just be what the doctor order to help Alabama regain its confidence. The Crimson Tide ended its road trip at 1-1, but struggled on offense and special teams. Being back in front of the home crowd may light a fire under the Crimson Tide as the season moves on.

Senior quarterback Blake Sims has made some mistakes, but he has been productive nonetheless. Sims is completing 67.8 percent of his passes for 1,480 yards with 10 touchdowns and three interceptions. He needs to improve on working through his progressions and getting others involved. Sims tends to focus too much on Amari Cooper. Lane Kiffin’s offensive system is built on getting every playmaker an opportunity to work.

Alabama wasn’t balanced offensively against Arkansas. The Crimson Tide looks to get its ground game going against Texas A&M.

T.J. Yeldon leads all running backs with 452 yards and two touchdowns on 93 carries. Derrick Henry has 382 yards rushing and two scores on 77 carries. Sims has 154 rushing yards and three touchdowns on 36 carries.

It wasn’t a vintage Alabama defense, but it played well against Arkansas. The Crimson Tide forced three turnovers and four sacks. Alabama held the Razorbacks to 89 yards rushing.

The Alabama—Texas A&M matchup has lived up to its hype in the past two seasons. Johnny Manziel had his Heisman moment against the Crimson Tide in 2012. He registered 345 total yards (253 passing, 92 rushing) and two touchdowns. Texas A&M defeated Alabama 29-24 at Bryant-Denny Stadium.

AJ McCarron and the Crimson Tide returned the favor at Kyle Field in 2013. It was an epic shootout, but McCarron got the better of Manziel. McCarron tossed for 334 yards and four touchdowns. Manziel was intercepted twice. Alabama won 49-42 in College Station, Texas.

A loss to Mississippi woke Alabama up. A one-point victory over Arkansas really has it thinking. The Crimson Tide’s success starts with its offensive line. Austin Shepherd, Arie Kouandjio and company have to get it going.

Texas A&M’s defense looks to pressure Blake Sims and place Alabama in a world of hurt. Here is a table breakdown how both teams stack up against each other. 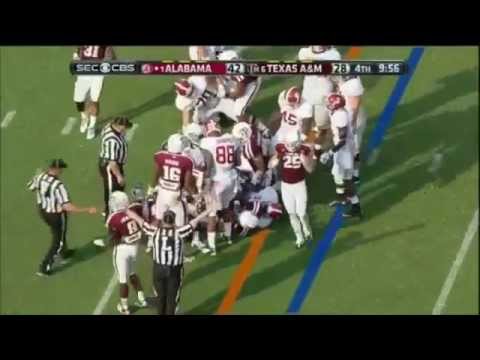