It regained its swagger against Texas A&M, but Alabama has to maintain its momentum on the road. Neyland Stadium (Knoxville, Tenn.) is the venue this week as the Crimson Tide will face the Tennessee Volunteers.

Worley is a step up from Florida’s quarterback Jeff Driskel, but he continues to struggle with decision making. Worley has completed 62.3 percent of his passes for 1,579 yards. He has 12 touchdowns and eight interceptions this season. Worley can make big time throws, but his placement on passes must improve.

A huge performance from running back Jalen Hurd is a must for Tennessee against Alabama. Hurd leads all backs with 414 rushing yards and two touchdowns on 93 carries. Marlin Lane has 160 yards rushing and a touchdown. The Volunteers offensive line has to be disciplined and create opportunities for Tennessee.

Marquez North is Tennessee’s primary receiver. He’s registered 26 catches for 264 yards and four touchdowns. Alton “Pig” Howard has 26 receptions for 243 yards and a score. Jason Croom’s collected 13 passes for 188 yards and a touchdown. Von Pearson, Jalen Hurd and Josh Smith each have a touchdown reception.

Blake Sims targeted one receiver against Mississippi and Arkansas, but he shared the wealth against Texas A&M. Sims was composed, despite a few bad passes. He was 16/27 passing for 268 yards and four total touchdowns. He extended plays with his legs and didn’t turn the ball over.

Alabama and Tennessee have met 95 times. The Crimson Tide leads the series 50-38-7. 2006 was the last time Tennessee defeated Alabama. Erik Ainge was frustrated the entire game, but he threw for 302 yards. Arian Foster had one rushing touchdown and Tennessee win 16-13. The Crimson Tide has won the last seven meetings against Tennessee, including a 12-10 victory in 2009. The Volunteers controlled the momentum for most of the contest, but two Terrence Cody blocked field goals (Daniel Lincoln) secured a win for Alabama.

Alabama’s offensive coordinator Lane Kiffin may need to wear ear plugs Saturday. Any person on the streets of Knoxville, Tenn., will tell you that Kiffin is public enemy number one. Johnny Majors and Phillip Fulmer are two coaches that Tennessee fans hold dear to their hearts.

2009 was Kiffin’s lone season as Tennessee’s head coach. It was also the last time the Volunteers had a winning record since Fulmer stepped down in 2008. Tennessee finished 2009 at 7-6. The Volunteers went to the Chick-fil-A Bowl, but lost to #11 Virginia Tech 37-14. On January 12, 2010, Kiffin left Tennessee to accept a head coaching position at Southern California. 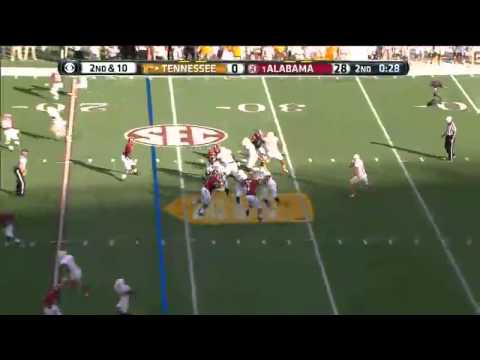