Legends have it and strangers lust for it. As the 2014 season enters its final lap, an intense conversation will pick up pace. Archie Griffin tasted its champagne twice (1974-75), but a new face will join the Heisman house this season.

John Berwanger became a frontrunner for the tradition. He was the first recipient of a coveted bronze award in 1935. Berwanger played for the University of Chicago was regarded as a one man football team.

John Heisman, director of the downtown athletic club and football pioneer, wanted an award that symbolized a football player whose performance best exhibits the pursuit of excellence with integrity.

Mark Ingram is the lone Alabama player to win a Heisman Trophy in its 79-year history. Ingram received the award in 2009. He rushed for 1,658 yards and totaled 20 touchdowns (17 rushing, 3 receiving).  Ingram guided Alabama to an SEC title and a national title in the 2009 season.

David “The Deuce” Palmer was Alabama’s closets receiver to a Heisman Trophy (3rd in 1993), but Amari Cooper has a chance to bring the award back to Tuscaloosa.

The junior from Miami Northwestern High School (Miami, Fla.) exploded as a freshman at Alabama. Cooper caught 59 passes for 1,000 yards and 11 touchdowns. He became AJ McCarron’s primary target and was an important piece in Alabama’s 2012 championship season.

Cooper recorded decent numbers in 2013, despite injuries and frustration. His best performances came against Tennessee, Auburn and Oklahoma. Cooper had five catches for 75 yards against the Volunteers. He collected six catches for 178 yards, including a 99-yard touchdown reception against the Tigers. Cooper registered nine catches for 121 yards against the Sooners. He ended 2013 with 45 receptions for 736 yards and four scores.

Cooper took on a leadership role when Kevin Norwood and Kenny Bell left. He got back in the weight room and started preparing for 2014. A healthy Cooper plus the addition of Lane Kiffin has paid off for Alabama. Kiffin’s system is based on getting explosive players the ball. Cooper has been targeted more than any other receiver on Alabama’s roster.

Cooper’s helped Blake Sims become confident offensively. His route running has improved and he’s embarrassed some of the best cornerbacks in the Southeastern Conference.

Cooper has been through three different quarterbacks (Teddy Bridgewater, AJ McCarron and Blake Sims), but his results remain the same.

What a difference a year makes? Cooper’s totaled 71 catches for 1,132 yards and nine touchdowns this season. He’s set to own every receiving record in the books, barring an injury.

Cooper has Alabama at 7-1. The Crimson Tide’s chances at an SEC and national title are still very much alive. Cooper’s star-studded performance this season has him deep in the Heisman conversation. His career numbers at Alabama are unreal. Cooper has 175 receptions for 2,868 yards and 24 touchdowns.

Cooper wants a shot at New York, but so does Marcus Mariota, Jameis Winston, Ameer Abdullah, Melvin Gordon, Dak Prescott and others.

Winston looks to be the first player since Archie Griffin to win the Heisman twice. He’s completing 70.6 percent of his passes and has tossed 13 touchdowns.

Mariota’s return to Eugene, Ore., has benefitted Oregon this season. He’s totaled 2,283 passing yards, 24 touchdowns and one interception. Mariota has Oregon on the outside looking in on the College Football Playoff.

Prescott has Mississippi State on a dream season. The Bulldogs are 7-0 and is No.1 in the College Football Playoff rankings. Prescott has 1,685 passing yards and 25 total touchdowns (15 passing, 10 rushing).

Ameer Abullah and Melvin Gordon are both holding the Big Ten up. Abdullah has 1,249 rushing yards and 17 touchdowns for Nebraska. Gordon’s totaled 1,168 yards rushing and 16 touchdowns for Wisconsin.

Amari Cooper has given himself a chance to win a Heisman, but it will be a fight down to the end. Four games remain in the regular season. Cooper has to put up big numbers against LSU, Mississippi State and Auburn if he wants to bring the award to Tuscaloosa.

Each Heisman candidate plays in a tough conference, but there is something about the SEC that prepares its players more for these moments.

The Heisman quest begins now, but the question is who wants it more? Is this Cooper’s year? Will Ingram remain as Alabama’s lone Heisman recipient? These questions will be answered later in the season. 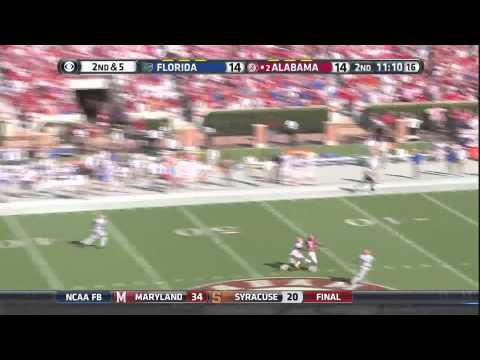