Summary: Alabama’s defense gave up 183 rushing yards, but it didn’t let Anthony Jennings beat it. Jennings completed 36.4 percent of his passes (8/22) for 76 yards, one touchdown and an interception. Travin Dural was LSU’s leading receiver, but he was held to three catches for 25 yards. Landon Collins made secure tackles in run support and Cyrus Jones rose to the occasion. Jennings picked on Jones a lot Saturday, but he held his ground and played well. Jones and Jabriel Washington deflected a pass away from Malachi Dupre on LSU’s lone possession in overtime.

Adam Griffith [B] – Kickers need to have a short-term memory. Adam Griffith displayed it Saturday against LSU. He missed a 27-yard field goal in the second quarter, but responded with two clutch kicks. Griffith nailed a 39-yard attempt late in the second quarter to give Alabama a 10-7 lead. He made a 27-yard field goal as time expired in regulation, sending the game into overtime. Griffith recorded one touchback on kickoffs. He averaged 58.0 yards per kick.

JK Scott [B]-JK Scott got work in against LSU. He averaged 48.6 yards per punt. Scott pinned the Tigers inside its 20-yard line twice, but he out kicked Alabama’s coverage a lot. He ended with nine punts for 437 yards.

Summary: He entered the contest in a funk, but Adam Griffith found his way out of it. Griffith executed his job on two of three kicks and helped Alabama secure a win. JK Scott had a few bad punts, but overall he was fine. Reuben Foster had fun on special teams. He drilled Fournette on a kick return in the fourth quarter.

Summary: Alabama’s offensive line couldn’t establish a run game. LSU’s defense dominated in the trenches. The Crimson Tide did a good job in pass protection. Blake Sims was sacked one time against the Tigers. Penalties continue to haunt Leon Brown. He made two critical errors in Alabama’s first possession in overtime.

J. Yeldon [C] – T.J. Yeldon wasn’t used enough against LSU. He would rip off some big runs, but offensive coordinator Lane Kiffin would then revert back to passing. Yeldon averaged 4.5 yards per carry. He totaled 68 yards rushing on 15 carries. Ball security demons appeared for Yeldon late in regulation. He lost a fumble inside Alabama’s 20-yard line, and aggravated a foot injury he suffered against Tennessee.

Summary: Lane Kiffin got too cute with Alabama’s play calling against LSU. It’s good to open an offense up, but proper execution is a coordinator’s main priority. The Crimson Tide had moments when its run game was working, but Kiffin got away from it. Alabama totaled 106 rushing yards against LSU.

Amari Cooper [B] – He stands alone in the Alabama record books, but Amari Cooper had a few critical drops Saturday night. Blake Sims hit him in stride, but Cooper couldn’t hang on. Overall, Cooper still remained a factor. He ended with eight catches for 83 yards and a touchdown.

DeAndrew White [A] – DeAndrew White has battled injuries, but he came to life against LSU. Two of his three catches came at pivotal moments. White’s second reception set up Griffith’s tying field goal late in regulation. His third catch was the clincher in overtime. White totaled 36 yards receiving and a touchdown.

O.J. Howard [B] – He still has issues blocking, but O.J. Howard was huge on Alabama’s final possession in regulation. He caught two passes for 12 yards in the fourth quarter. Howard got out-of-bounds and preserved time for Griffith to attempt a 27-yard field goal. He had three catches for 21 yards.

Christion Jones [B] – Christion Jones’s 22-yard reception late in regulation was priceless. He secured the catches throughout the play. Jones wasn’t targeted much, but he made plays when it mattered. He recorded three catches for 38 yards.

Summary: Amari Cooper owns records, but Alabama’s receiving corps was clutch down the stretch. Christion Jones, DeAndrew White and O.J. Howard all made critical catches in the fourth quarter. Alabama even got an unlikely reception from Brandon Greene in overtime. Greene caught a 24-yard pass, setting up a 6-yard touchdown pass from Sims to White.

Blake Sims [C] – It wasn’t easy, but Blake Sims got it done. He battled nerves throughout the game. Sims misfired on many pass attempts, but he didn’t lose confidence. He showed leadership on Alabama’s final two possessions. Sims managed the clock well and got the Crimson Tide in prime position to force overtime. He audibled to a pass play in overtime and found White for a 6-yard touchdown. Sims attempted 45 passes, but his last one sealed the deal. He completed 44.4 percent of his passes (20/45) for 209 yards and two touchdowns.

Summary: Wins at Tiger Stadium are hard to come by. Blake Sims displayed strength in the fourth quarter. It wasn’t his best outing, yet he finished with a win.

The Crimson Tide did achieve a first down in the second half until the fourth quarter. LSU ran more plays, but Alabama’s defense stood its ground. The Crimson Tide gave up 259 yards of offense. Alabama held LSU to a field goal late in regulation.

LSU’s kicker Trent Domingue made a crucial mistake in the fourth quarter. He kicked the ball out-of-bounds. LSU was flagged for illegal procedure. Alabama got the ball on the 35-yard line instead of the 20. The Crimson Tide capitalized on Domingue’s error by scoring with three seconds, sending the game to overtime.

Baton Rouge, La., was Alabama’s final road test. The Crimson Tide has Mississippi State and Auburn at Bryant-Denny Stadium. A Southeastern Conference title is still in reach if Alabama wins out. 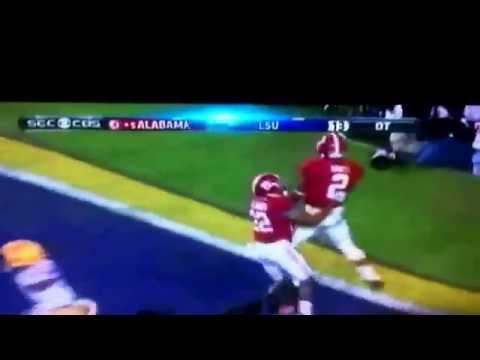