The Iron Bowl is legendary, but Saturday’s matchup between Alabama and Mississippi State will be one for the ages. It doesn’t get any better than seeing two dual threat quarterbacks battle for a spot in the College Football Playoff. Bryant-Denny Stadium will be fired up, and ESPN’s College GameDay will be in attendance as Mississippi State looks to remain undefeated.

Mississippi State’s head coach Dan Mullen is in his sixth season with the program. He’s had some success, but this has been a dream season for him and the Bulldogs.

Wins against Auburn and LSU have given Mississippi State confidence. The Bulldogs were challenged against LSU and Kentucky on the road, but Bryant-Denny Stadium is a completely different atmosphere.

Junior quarterback Dak Prescott is a frontrunner for the Heisman Trophy. He is known for his mobility, but Prescott is a much improved passer. He has completed 61.1 percent of his passes for 2,231 yards, 18 touchdowns and seven interceptions. Prescott’s averaged 5.4 yards per carry as a runner. He has collected 779 yards rushing and 11 touchdowns.

Prescott is an effective runner, but he feeds off Josh Robinson’s energy. Robinson leads Mississippi State’s backfield with 984 rushing yards and 11 touchdowns. He’s built low, and excels at running between the tackles. Brandon Holloway has averaged 6.8 yards per carry. He has 223 yards rushing and a touchdown. Ashton Shumpert and Nick Griffin each have 124 yards and a score.

He was a basketball star at Wenonah High School (Birmingham, Ala.), but sophomore De’Runnya Wilson has become a potent receiver. Wilson leads Mississippi State’s receiving corps with 22 catches for 367 yards and six touchdowns. His length, 6’5” 225 pounds, allows him to stretch the field and make huge plays. Jameon Lewis is an all-purpose athlete. He is dangerous as a receiver, runner, return man and quarterback on some occasions. Lewis has 16 receptions for 225 yards and a touchdown. He has thrown one pass this season, but it went for a 24-yard touchdown. Malcolm Johnson, Fred Ross, Fred Brown and Joe Morrow all have come alive as of late. Ross leads the set with 277 yards and three touchdowns.

Alabama’s matchup against LSU lived up to its hype. Two great coaches and two premiere defenses dominated for four quarters. Alabama’s offense struggled, but Blake Sims showed leadership late in regulation. He guided the Crimson Tide into overtime with a good drive. Sims delivered Alabama a victory with a 6-yard touchdown pass to DeAndrew White. The Crimson Tide defeated LSU 20-13.

Alabama returns home Saturday. The Crimson Tide is 4-0 at Bryant-Denny Stadium. 48.5 points per game is nice, especially when a boisterous crowd is behind you.

Junior running back T.J. Yeldon injured his foot against LSU, but should be to go against Mississippi State. He rushed for 68 yards on 15 carries, prior to the injury. Yeldon has 686 yards and five touchdowns this season. He is 314 yards away from a third 1,000-yard season. Sophomore Derrick Henry weighs in with 554 rushing yards and four scores. He’s averaged 5.0 yards per carry. Sims is improving as a passer, but remains a threat on the ground. He has 262 yards and five touchdowns.

Amari Cooper had some drops against LSU, but ended with eight catches for 83 yards and a touchdown. He stands as Alabama’s all-time leading receiver with 2,951yards. Cooper has 79 receptions for 1,215 yards and 10 touchdowns. DeAndrew White came alive for Alabama twice against LSU. He had a 16-yard reception to set up Adam Griffith’s game-tying field goal. White’s 6-yard touchdown reception resulted in a Crimson Tide victory. He has 26 catches for 279 yards and two touchdowns. Christion Jones caught three passes against the Tigers. He has 14 receptions for 192 yards. O.J. Howard collected two receptions late in regulation against LSU. Howard has nine catches for 171 yards this season.

Opponents have averaged 8.25 points per game against Alabama at Bryant-Denny Stadium.

Many intense moments have occurred in the Battle for Highway 82. 2006 is a year most Alabama fans desire to forget. The Crimson Tide entered the contest at 6-3. Mississippi State was in search of its first Southeastern Conference win. Running back Anthony Dixon totaled 121 yards rushing. Alabama’s quarterback John Parker Wilson struggled throughout the game. Mississippi State won 24-12.

Alabama traveled to Starkville, Miss., in 2013 to face the Bulldogs. It was a tough outing for AJ McCarron, but the Crimson Tide pulled through. McCarron found Brian Vogler for an 18-yard touchdown. Alabama won 20-7.

Alabama versus Mississippi State is a regular game in recent years, but 2014 is different. Saturday’s matchup is for all the marbles. Mississippi State’s undefeated season and Dak Prescott’s shot of hoisting a Heisman are both on the line. Alabama’s dreams are still alive. The road to an SEC title game still flows through Tuscaloosa. Alabama can do some damage to a College Football Playoff picture with a victory Saturday. Amari Cooper is already in a conversation, but a huge performance from Blake Sims could place him in the running for a Heisman. 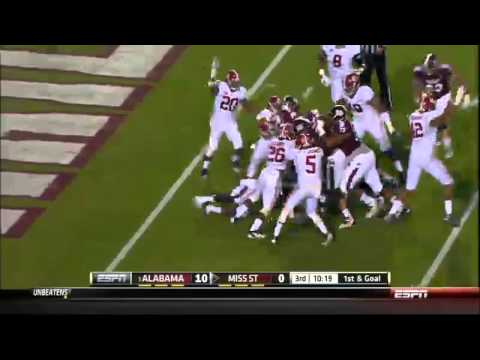