JK Scott [A] – JK Scott was named a semifinalist to the Ray Guy Award list this week. He strengthened his campaign with his play against Mississippi State. Scott averaged 45.6 yards per punt. Five of his seven kicks (71.4 percent) pinned the Bulldogs inside its own 20-yard line.

Adam Griffith [B] – Adam Griffith is now 12/18 on FGs (66.7 percent) this season. He missed a 37-yard attempt in the third quarter, but connected on a 36-yard try in the first quarter. Griffith averaged 63.2 yards on kickoffs with one touchback.

Summary: JK Scott is a punting assassin. He did a masterful job of flipping field position. Adam Griffith had an even performance. He made one of two field goal attempts and recorded a touchback.

Blake Sims [B] – Blake Sims has engineered critical drives for Alabama in back-to-back games. He did it against LSU and responded with a second audition against Mississippi State. Sims made some huge plays, but he needs to trust his mobility more. He converted two third downs with his feet, but tried to pass the ball when Mississippi State was giving him running lanes. Overall, Sims completed 61.3 percent of his passes (19/31) for 211 yards and a touchdown.

Summary: Blake Sims was clutch for Alabama in the fourth quarter. Mississippi State cut Alabama’s lead to 19-13. Sims led a 15-play, 76-yard drive that culminated in a 7-yard touchdown run for T.J. Yeldon. The drive took a little over six minutes off the clock, and included three third down conversions.

T.J. Yeldon [B] – T.J. Yeldon decided to give his ankle a try. It was a struggle at first, but Yeldon got stronger in the second half. He ran well in the fourth quarter, totaling 72 yards rushing and a touchdown on 16 carries. Yeldon averaged 4.5 yards per carry.

Summary: Yeldon led all back with 72 rushing yards, but he and Derrick Henry both rushed for a touchdown. Henry collected 36 yards rushing on 11 carries. Sims averaged 4.5 yards per carry. He recorded 18 yards on four carries.

Amari Cooper [A] – Amari Cooper has caught at least eight passes in nine of 10 games for Alabama. He grabbed eight passes against Mississippi State for 88 yards and a touchdown. Cooper’s longest reception was a 50-yard catch, in which he elevated and snatched away from double coverage. He has 11 touchdown receptions, tying a record he set as a freshman (2012).

Linebackers [B+] – Alabama’s linebackers played well, despite a few missed tackles. Reggie Ragland’s case for a Butkus Award continues. He led all linebackers with 10 tackles. Trey DePriest accounted for Alabama’s first point of the contest. He had nine stops and recorded a safety. Ryan Anderson and Xzavier Dickson totaled two tackles apiece.

Summary: Alabama’s defense made life difficult for Dak Prescott and Mississippi State. The Bulldogs couldn’t establish a solid run and Prescott took a beating. Alabama’s secondary has come a long way since week one against West Virginia. Alabama held Mississippi State to six points for much of the contest. The Bulldogs scored two touchdowns in the fourth quarter, but it wasn’t enough.

Alabama’s head coach Nick Saban improves to 6-0 against Dan Mullen. Saban has won five games against AP No.1 ranked teams, most all-time by any head coach.

The fans inside Bryant-Denny Stadium did their job. The atmosphere rattled Mississippi State. Saban has preached to his defense about winning the turnover battle. Alabama responded with three interceptions off of Dak Prescott. Receivers De’Runnya Wilson (eight catches, 91 yards) and Malcolm Johnson (four catches, 74 yards) both played well, but the Bulldogs fell short.

“I was proud of the way our players competed in the game,” Saban said. “I thought our defense did a fantastic job. Turnovers were huge. To have the three interceptions were huge drive stoppers.”

“Offensively we struggled a little in the second half,” Saban said. “We didn’t move the ball with the kind of consistency we needed. I thought at the end of the third quarter we were tiring on defense. When we needed to put a together a drive on offense and answer the bell and score to make it a two-point game, the offense put a great drive together.”

Alabama’s quarterback Blake Sims displayed leadership in another tough game. He led a drive in the fourth quarter that lengthened Alabama’s lead to 25-13. Sims made some good throws and moved the chains with his feet.

“I’ve always trusted Blake,” Saban said. “Blake’s got good instincts in terms of where to throw the ball and timing of throwing the ball. We’ve showed a lot of confidence in him. I trust Blake to make good decisions. He has a great feel for the game as a scrambling quarterback. He made two fantastic third down conversions. We trust Blake, especially when he is playing his game.”

It was questioned as to whether Alabama’s running back T.J. Yeldon would play against Mississippi State. He participated in 80 percent of drills this week and started Saturday.

“I thought T.J. played well in the game,” Saban said. “He wasn’t as explosive as normal, but the guy is a true warrior in terms of wanting to be on the field. Hopefully, we will get him healed up down the stretch.”

One is never too young to make an impact. True freshman JK Scott has been a model of consistency for Alabama on special teams. Mississippi State rarely started in good field position because of Scott’s ability to pin opposing teams deep.

“He’s obviously one of the unsung heroes on this team,” Alabama’s center Ryan Kelly said on Scott.

He now has 87 catches for 1,303 yards and 11 touchdowns. Cooper has broken records all season, but added another one against Mississippi State. He’s now in fourth place in Southeastern Conference history with 3,039 career receiving yards. Cooper is the fifth SEC receiver in history to accomplish a 3,000-yard receiving feat.

Auburn, LSU and Texas A&M all lost Saturday. Alabama’s 25-20 victory over Mississippi State seals its chance of winning an SEC West crown, if it holds serve. TCU managed an ugly victory over Kansas, 34-30. The Crimson Tide should crack the top four next week, but the question is how much Mississippi State and TCU will drop? Next Tuesday will unleash more madness. Everything lies in the hands of the playoff committee. Alabama did its job Saturday. The goal remains the same, win and you’re in. 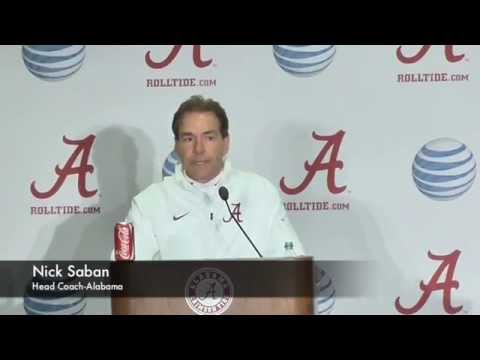