A victory over Mississippi State has Alabama first in the College Football Playoff rankings. The Crimson Tide remains at Bryant-Denny Stadium this week, as it will face FCS-opponent Western Carolina.

Junior quarterback Troy Mitchell has been effective this season. He’s completed 66.5 percent of his passes for 2,320 yards, 18 touchdowns and nine interceptions. Mitchell threw for 339 yards and five touchdowns in Western Carolina’s victory over VMI.

Junior Darius Ramsey is the Catamounts featured running back. Ramsey’s totaled 753 rushing yards (5.2 yards per carry) and six touchdowns. Mitchell can sling the ball, but he’s also a potent runner. He has 572 yards and six touchdowns on the ground. Freshman Detrez Newsome has 489 yards rushing. Newsome leads all backs with nine rushing touchdowns.

Redshirt sophomore Spearman Robinson is Western Carolina’s deep threat receiver. He has 40 receptions for 526 yards and nine touchdowns. Karnorris Benson has appeared in nine games for the Catamounts, totaling 31 catches for 401 yards and five touchdowns. Terryon Robinson leads the group in receptions (50), receiving yards (643) and yards per game average (58.5). Robinson has collected one touchdown reception this season.

Senior quarterback Blake Sims was clutch for Alabama in the fourth quarter. He engineered a 15-play, 76-yard drive that ended on a 7-yard touchdown run from T.J. Yeldon. Sims converted two critical third downs with his feet, and the drive took a little over six minutes off the clock. He finished 19/31 passing for 211 yards and a touchdown.

Sims has been special for the Crimson Tide this season. He’s completed 61.6 percent of his passes for 2,454 yards, 23 total touchdowns (18 passing, 5 rushing) and three interceptions.

Amari Cooper’s performance against Mississippi State has him third in the Heisman race. He caught eight passes for 88 yards and a touchdown in Alabama’s win over the Bulldogs. Cooper has been nothing short of remarkable this season. He has 87 receptions for 1,303 yards and 11 touchdowns. Cooper’s averaged 130.3 receiving yards per game. Senior DeAndrew White has come on strong as of late. He’s caught 11 passes for 135 yards and a touchdown in the last three games (Tennessee, LSU and Mississippi State). White has 30 receptions for 319 yards and two touchdowns. Christion Jones and T.J. Yeldon both have 14 catches apiece. O.J. Howard has 10 receptions for 173 yards.

Since 2010, Alabama’s senior class has guided this team to a 55-8 record. This class has been a part of two national titles, and with leaders like Blake Sims, Ryan Kelly, Trey DePriest and others, it has a chance to win another one. Alabama’s coaching staff and fans will honor this class Saturday with flowers and cheers of appreciation. Homecoming is full of excitement, but winning remains a focus point.

Alabama defeated LSU and Mississippi State, but it endured some injuries in both games. The Crimson Tide will rest some starters against Western Carolina, including T.J. Yeldon. Blake Sims will start first, but expect to see plenty of Jake Coker in the second half. The Crimson Tide’s 2014 recruiting class will get some action defensively Saturday. Alabama’s head coach Nick Saban has yet to specify placekicker Adam Griffith’s injury. Freshman punter JK Scott will get an opportunity to attempt some field goals. Receivers ArDarius Stewart, Chris Black, Cameron Sims and Robert Foster will receive much field time against the Catamounts. Alabama isn’t overlooking Western Carolina, but it is using this matchup to prepare for Auburn. 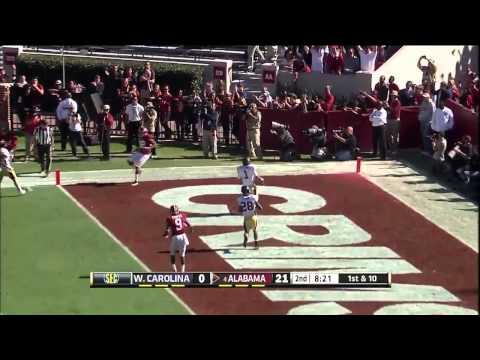