Alabama football has been known for two things under head coach Nick Saban, a balanced run game and a feared defense. Some programs rely heavily on one running back, but at Alabama, that style simply won’t work. Since 2008, the Crimson Tide has achieved production using a trio backs. This year’s offensive line is more finesse than in recent seasons, yet Alabama’s run game remained balanced.

T.J. Yeldon and Derrick Henry both have been productive. Both backs are nearing 1,000 yards rushing and have 10 touchdowns apiece. Alabama’s offensive coordinator Lane Kiffin loves to air it out, but Saban remains a disciple of a strong run game. Listed below is a breakdown of how successful Saban has been at Alabama using a ground and pound attack.

2009 was a memorable year for Mark Ingram. He totaled 1,000+ yards rushing, and guided Alabama to a Southeastern Conference title and a national championship. Ingram received numerous awards in 2009, including SEC Offensive Player of the Year, Sporting News Player of the Year and a Heisman Trophy.

Mark Ingram missed a few games because of knee surgery, but Trent Richardson picked up the slack. Alabama’s backs averaged 5.09 yards per carry in 2010. Vlachos, Jones and Carpenter returned to the offensive line. The Crimson Tide rushed for 2,378 yards and 30 touchdowns. Alabama totaled 35.7 points per game, and finished at 10-3.

Trent Richardson became Alabama’s featured back in 2011. He along with Eddie Lacy and Jalston Fowler ran behind a dominant offensive line. It graduated Mike Johnson and James Carpenter, but Jones, Vlachos, Chance Warmack, Anthony Steen and D.J. Fluker took over.

The Crimson Tide’s backs tallied 5.49 yards per carry, recording 2,788 rushing yards and 34 touchdowns. Richardson and Lacy took all the pressure off first-year starting quarterback, AJ McCarron. Richardson ended 2011 as a recipient of the Doak Walker Award. He finished third in the Heisman voting. Alabama finished the season 12-1, and captured its 14th national title.

His laugh made him a fan favorite, but it was Eddie Lacy’s trademark spin move that aggravated defenders. He took on a leadership role as Alabama’s featured back in 2012. The Crimson Tide’s stable offensive line guided its backs to 3,185 rushing yards and 37 touchdowns. Alabama’s backs averaged 5.59 yards per carry. The Crimson Tide notched a 13-1 record, accomplishing a SEC title and a national championship in 2012.

Alabama’s offensive line had its issues in 2013, but T.J. Yeldon led a rushing attack that generated 5.80 yards per carry (most in Saban era). The Crimson Tide accounted for 2,673 rushing yards and 28 touchdowns. Derrick Henry emerged late in the season. He had two 100-yard rushing performances against Arkansas and Oklahoma (2014 Sugar Bowl). Alabama’s offense totaled 38.2 points per game under Doug Nussmeier, and finished 2013 at 11-2.

Junior receiver Amari Cooper is the focus point on this year’s team. Lane Kiffin has used him in every way imaginable. Alabama’s offensive line is better at pass protecting than run blocking, but Kiffin managed to create balance. The Crimson Tide’s backs have averaged 209.5 rushing yards per game. T.J. Yeldon has battled injuries and Alabama lost Kenyan Drake to a broken leg, but Yeldon, Henry, Blake Sims and Tyren Jones all have picked up the slack. Alabama’s collected 2,723 rushing yards, netting 5.11 yards per carry. Its 32 rushing touchdowns tie it for third most in the Saban era. 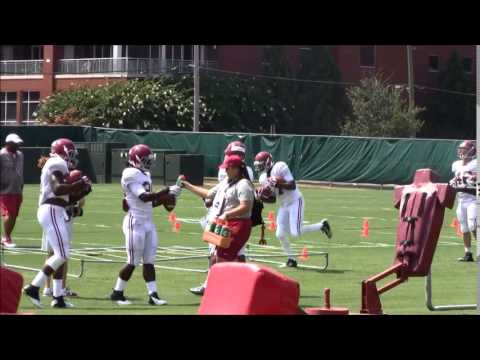