Speeches have been made, and agendas have been preached. ESPN has given us a full insight into what’s going on for Alabama and Ohio State during Sugar Bowl preparations. The game itself is the lone aspect to anticipate. Buckeyes’ quarterback Cardale Jones looks to show why he isn’t afraid of the big moment. Alabama’s senior quarterback Blake Sims looks to continue an historic, underdog season. Both coaching staffs will encounter an epic chess match Thursday.

Two great offensive minds will take the field in New Orleans, Lane Kiffin and Tom Herman. Both men share one common denominator, confusing the opposition with different schemes. Kiffin and Herman both want to get their playmakers the ball in space. It will be a challenge for both defenses to limit huge plays and keep yardage to a minimum.

Alabama’s defensive coordinator Kirby Smart said he looks to generate pressure on Jones. The Crimson Tide’s defense has been disruptive, totaling 29 sacks, 54 pass breakups and 53 quarterback hurries. Cornerback Cyrus Jones and Eddie Jackson could be left on an island, if Smart decides to blitz Jones often. Jones is eighth on the team in tackles (44) and leads Alabama in pass breakups (9). Jackson has 37 stops, five pass breakups and an interception.

Ohio State’s defensive lineman Joey Bosa attracts much attention, but its defensive tackle Michael Bennett that creates Bosa’s success. Bennett fills in gaps and excels against the run. He has 12.5 tackles for loss and six sacks. Bosa leads the team in tackles for loss (20.0) and sacks (13.5). Alabama’s center Ryan Kelly and left tackle Cam Robinson both will have to neutralize Bosa and Bennett. Alabama has faced seven of eight top pass rushers nationally, allowing 2.5 sacks.

Key to Victory for both teams: Control the turnover battle.

LSU and Ole Miss failed, but Alabama looks to deliver a fifth bowl victory for the Southeastern Conference.  Alabama and Ohio State both have stated that this is a business trip. Focus is a must in every game. Thursday’s Sugar Bowl champion will be decided on which team can sustain the most intensity. Urban Meyer wants to settle a score against Nick Saban, but Ohio State looks to improve its record against the SEC as a whole in bowl games. The Buckeyes are 0-9 against the SEC in postseason play, including two losses in national titles games (Florida and LSU).

Thursday night will be electric inside the Mercedes-Benz Superdome. 2008 and 2013 both ended in Sugar Bowl losses for Alabama. Saban and company looks to right the ship. Meyer and Ohio State want to secure a victory for the Big Ten. Who will succeed in the keys to victory? Answers will be provided when the confetti falls Thursday night. 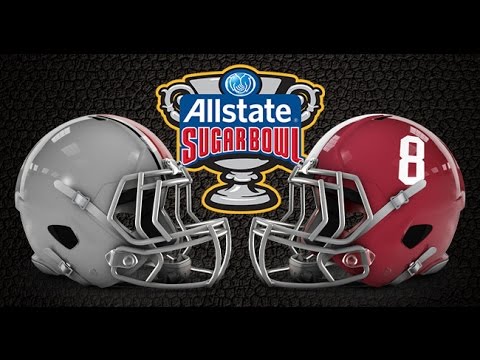