It wasn’t easy, but Alabama fans grew with its team in 2014. The Crimson Tide accomplished a lot, and head coach Nick Saban guided the group to a College Football Playoff appearance. Senior quarterback Blake Sims proved he could lead the team.

He totaled 3,487 yards, 35 touchdowns and 10 interceptions. Amari Cooper had a record-setting season, accounting for 1,727 yards and 16 touchdowns on 124 catches. Running backs T.J. Yeldon and Derrick Henry both neared 1,000 yards rushing. Both collected 11 touchdowns.

Alabama’s 2014 team was thought to lose three or more games. It managed to secure a 10+ win season and a Southeastern Conference title. Here are the top five best games from 2014.

Summary: Fans on both sides of the rivalry were on the edge of their seats. It combined for the most points in series history. Blake Sims had a terrible start, but engineered a finish for the ages. He overcame three interceptions, and guided Alabama to victory. Sims registered four touchdowns in the second half, including two touchdown passes to Amari Cooper. T.J. Yeldon had the hot hand for much of the game. He had 127 rushing yards and two touchdowns on 19 carries. Derrick Henry did damage in the second half, posting 72 yards and a touchdown on 14.4 yards per carry. Cooper took Auburn’s secondary to school. He put in 13 receptions for 224 yards and three touchdowns. DeAndrew White chimed in 19 receiving yards and a touchdown.

Summary: Alabama’s playoff push started at Tiger Stadium. Blake Sims didn’t have his best game, but it didn’t matter. He completed 20 of 45 passes for 209 yards and two touchdowns. Sims led Alabama on a 9-play, 55-yard drive in the fourth quarter with 50 seconds left to tie the game at 13. He completed passes to O.J. Howard, DeAndrew White and Christion Jones on the drive. Placekicker Adam Griffith nailed a 27-yard field goal to send the game into overtime. Sims returned in the overtime period with a game-winning, 6-yard touchdown pass to White. He caught three passes for 36 yards. Jones had three receptions for 38 yards. Amari Cooper led the group with eight catches for 83 yards and a touchdown. 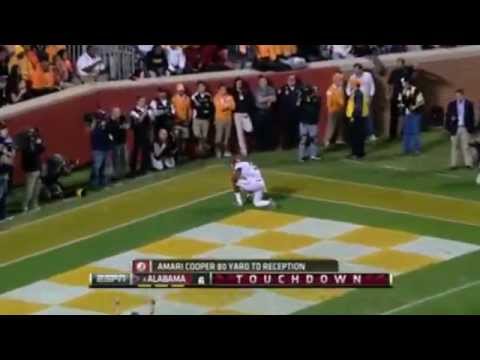