Alabama’s head coach Nick Saban does it again. Wednesday was another day at the office for the Crimson Tide, as it brought in a No.1 recruiting class for a fifth consecutive year.

Of its 24 commits, 18 were from the ESPN 300 and six were five-star prospects. Alabama addressed its needs on defense, but surprised many people with the moves it made offensively.

The Crimson Tide pulled in a five-star quarterback, running back and wide receiver. Alabama continued its showing by targeting four 4-star offensive linemen and a four-star tight end.

The program graduated some seniors and witnessed other declare for the 2015 NFL Draft. Alabama returns a lot of talented players, but it could see some freshman push for playing time next season.

Nick Saban enjoys recruiting junior college players. He had Terrence Cody and Jesse Williams, and currently has Jarran Reed and D.J. Pettway. Jonathan Taylor saw a year of field time at Georgia, before being dismissed for a domestic violence arrest.

He showed signs of promise with the Bulldogs, registering nine tackles, 1.5 tackles for loss, a sack and a pass breakup in 2013. Copiah-Lincoln Community College served as Taylor’s road to redemption.

He was back on the market during the 2014 regular season. Defensive assistants Kirby Smart and Bo Davis both strongly pursued Taylor. Saban has given him a second chance, and with that, Taylor has an opportunity to push for playing time in 2015. His size, power and experience give him a significant shot to at least crack a second-string position, if not a starting spot.

Georgia native Adonis Thomas was a huge sign for Alabama. He helped establish success at Central Gwinnett High School in 2014. It accomplished a 7-5 record, resulting in a playoff berth.

Thomas recorded 124 tackles, 11 tackles for loss and five sacks. With Xzavier Dickson gone, Thomas has chance to push for playing time at outside/jack linebacker. He will need to put on more weight, but Thomas has power, lateral quickness and coverage abilities. Alabama’s outside linebackers coach Tosh Lupoi will get every ounce of production out of Thomas in his future with the Crimson Tide.

It’s a scary thought seeing a true freshman at safety in 2015, but it could very well happen for Ronnie Harrison. The Florida native enrolled early at Alabama. Harrison was dual threat athlete in high school, playing both quarterback and safety. Alabama loses Landon Collins, Nick Perry and Jarrick Williams. Harrison, who is roughly the same size as Collins, displays solid coverage and tackling skills.

Kenny Vaccaro and Earl Thomas were two dominant safeties from Texas. Deionte Thompson can be special, if he bulks up more. Like Harrison, Thompson was an early enrolle at Alabama. His speed and coverage skills will grant him playing time as a freshman, but Thompson best asset will be on special teams. He is a dynamic return specialist, as well as an exceptional tackler.

Alabama’s special teams coach Bobby Williams had no issues making a pitch for Hale Hentges. Hentges, a Missouri native, was listed as a four-star prospect on three out of four recruiting sites. He accounted for 2,559 yards and 34 touchdowns on 169 catches in his four years at Helias High School.

Four-star receiver Daylon Charlot is the seventh Louisiana native that Alabama has claimed in a recruiting cycle. Alabama loses Amari Cooper, Christion Jones and DeAndrew White, but Charlot can establish himself as a household name with the players returning.

His size and elusiveness make him an ideal slot receiver; however, Charlot can pose as a deep ball target. Special teams will be Charlot’s best option of field time as a freshman. He put Patterson High School on the map in the 2015 Under Armour All-America Game. Charlot totaled three punt returns for 101 yards and a touchdown. He can be a refined version of Christion Jones for the Crimson Tide.

Former Alabama receivers Julio Jones and Amari Cooper dominated college football as freshmen. Saban believes Calvin Ridley has the same ability. Cooper’s already stated that Ridley will wear his No.9 jersey in 2015. Ridley will bulk more, but he possesses speed, hands and body control. He is an exceptional route runner, yet Ridley needs to improve his blocking techniques.

Ridley appeared in three games at Monarch High School (Coconut Creek, Fla.) in 2014. He caught 18 passes for 420 yards and six touchdowns. Ridley registered one catch in the 2015 Under Armour All-America Game, but it was a 28-yard grab from Blake Barnett. Alabama returns a lot of receivers next season, but not much experience. Ridley will have a fair shot of earning field time against competition.

Damien Harris will play a lot in 2015. The five-star running back becomes the second Kentucky native to sign with Alabama (Shaun Alexander, 1995-99). Harris battled some injuries, but managed to build a successful resume at Madison Southern High School. He collected 1,576 yards and 23 touchdowns on 16.2 yards per carry as a senior. Harris notched 6,717 rushing yards and 111 touchdowns in his career. He owned the stage at the 2015 Under Armour All-America Game, totaling 122 yards and a touchdown on 16 attempts.

Lester Cotton is a home grown talent. The four-star offensive guard is a product of Tuscaloosa Central High School. Cotton is one of five offensive linemen that Alabama signed in its 2015 class.

He is a talented run blocker that can pull around and lock up at the point of attack. Cotton is listed as a guard, but Alabama’s offensive line coach Mario Cristobal will teach him how to maneuver at each position. The Crimson Tide graduated three seniors—Austin Shepherd, Arie Kouandjio and Leon Brown, but Cotton has the ability to step in and be a prominent lineman in the future.

Blake Barnett is the future for Alabama at quarterback. The five-star prospect was one of the top pocket passers nationally according to Rivals, Scout, 247 Sports and ESPN. He tossed for 2,332 yards and 22 touchdowns as a junior at Santiago High School in Corona, Calif. Barnett looks at himself as a pocket passer, but he can extend plays with his feet. He totaled 695 rushing yards with 13 touchdowns at Santiago.

Barnett, an Elite 11 finalist, was named most valuable player at Nike’s: The Opening competition in Beaverton, Ore. Barnett led Team Apocalyspe to a 19-0 victory over Team Land Sharks in the championship game. He tossed two touchdown passes in the contest.

Barnett participated in the 2015 Under Armour All-America Game. He completed 5 of 10 passes for 66 yards and a touchdown. Team Highlight dismantled Team Armour 46-6. Barnett’s passing abilities have already enamored Alabama’s offensive coordinator Lane Kiffin. Nick Saban is known for redshirting true freshman quarterbacks, but said he isn’t ruling out the idea of having one start in 2015. Barnett enrolled at Alabama early and is soaking up the atmosphere. He will participate in Alabama’s spring game on Sat. April 18, 2015 at 2:00 pm CT. 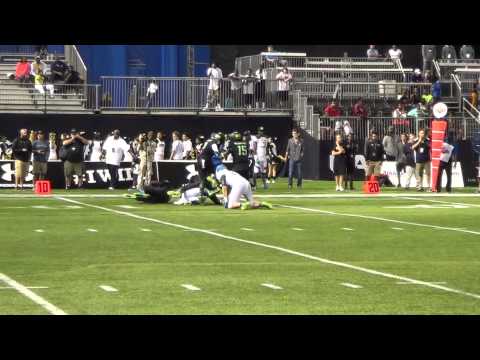