He placed first in the 20-yard shuttle, posting a time of 3.98 seconds. His 6.71 seconds in the 3-yard cone drill was good for 5th place among receivers at the combine.

Cooper put in a 33-inch vertical jump and a broad jump of 120.0 inches, but it was his hands and route running abilities that stole the show. He wasted no movement getting in and out of his cuts. Cooper displayed soft hands, and was consistently on the same page with the quarterback.

Summary: He was known as Alabama’s second option in the last two seasons, but Saturday witnessed DeAndrew White separate himself from Amari Cooper. He displayed exceptional speed in the 40-yard dash, despite battling injuries throughout his career.

White was clocked at a 4.46 on his first attempt and a 4.44 on his second. He accounted for a 34.5-inch vertical and a broad jump of 118.0 inches. White looked fluent running numerous drills, and excelled at consistently catching passes. His 34.5-inch vertical was the best of all Alabama’s participants.

Summary: Christion Jones’s second attempt in the 40-yard dash wasn’t aired, but he needs to improve on his 4.63. He chimed in with a 34.5-inch vertical and a broad jump of 119.0 inches. Jones was the lone Crimson Tide receiver that participated in the bench press, totaling eight reps of 225 pounds.

He finished near the bottom of the 3-cone drill (6.91 seconds), but Jones ended the 60-yard shuttle run as one of the top performers at 11.76 seconds. His finest moment was catching an over-the-shoulder pass from former Florida State quarterback Jameis Winston.

Summary: He wanted to show NFL scouts his speed, but Yeldon fell short of his 40-time goal. His first attempt was clocked at 4.61 seconds, while Yeldon’s second run suffered a 4.65. He compensated for a slow 40-time with a solid bench press performance. Yeldon collected 22 reps, putting him in 10th place. He also finished 10th in the vertical jump, netting 36.0 inches.

Yeldon was one of the top performers in the 20-yard shuttle. He finished at 4.22 seconds, good for 12th place. He displayed vision, power and speed in numerous drills, but he has to improve his 40-time. Melvin Gordon, Ameer Abdullah and Jeremy Langford all are dominating the competition.

Summary: Blake Sims didn’t reach his goal of running under a 4.50, but he did impress NFL scouts in the 40-yard dash. He ran a 4.59 in his first attempt and a 4.58 in his second. Sims’s official time was 4.57 seconds, good for third place among quarterbacks at the combine.

Sims’s 40-time was the highest of all Alabama quarterbacks under Nick Saban. Former Crimson Tide quarterback John Parker Wilson is the closest to Sims at 4.87 (2009). He finished 10th in the vertical jump at 30.5 inches and seventh in the broad jump at 115.0 inches. 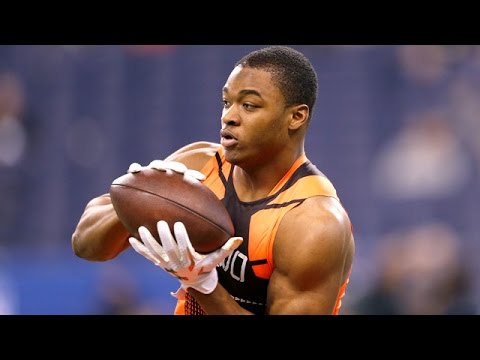