1983 and 2012 were two important years in the NFL Draft. Both showcased much depth and talent at the quarterback position. 1983 provided NFL fans with legends, including John Elway, Dan Marino and Jim Kelly. 2012 gave us Andrew Luck, Robert Griffin III and Russell Wilson.

The Auditorium Theatre in Chicago, Ill., will open doors for a new group of trigger pullers in 2015 NFL Draft on Apr. 30-May 2, 2015. Here is a list of the top 10 quarterbacks entering the event.

He became a starting quarterback in 2011, earning Freshman of the Year honors in the Western Athletic Conference with 17 total touchdowns (16 rushing, 5 passing). Fajardo completed 68.8 percent of his passes for 1,707 yards in 2011. He accounted for 694 rushing yards.

Fajardo is very athletic and can avoid pressure by stepping up in the pocket. His solid footwork allows him to buy extra time in locating receivers. Fajardo possesses a tight spiral and a quick release. He has the ability to put some velocity on the football.

Ball security is a huge concern for Fajardo, despite his athleticism as a ball carrier. He recorded 15 lost fumbles in his tenure at Nevada. His spiral is tight, but Fajardo’s overall mechanics are erratic. He struggles with consistently setting his feet and proper ball placement.

Summary: It took five seasons, but Alabama fans witnessed Blake Sims’s potential in 2014. He was featured as a running back and cornerback to start his career, but Sims got his first taste at quarterback in 2012. He was the backup to AJ McCarron for two years (2012, 2013), posting 244 yards and two scores on a 56.1 completion percentage.

Sims displayed much poise last season. He completed 64.5 percent of his passes for 3,487 yards, 28 touchdowns and 10 interceptions. Sims excelled at extending plays with his legs. He recorded 350 rushing yards and seven touchdowns in 2014.

His leadership was huge for Alabama against Auburn, LSU, Mississippi State and Tennessee. He led game-saving and game-winning drives in crucial situations against all four teams. Sims guided the Crimson Tide to a Southeastern Conference title and an appearance in the College Football Playoff. He leaves Alabama with 3,731 passing yards and 39 total touchdowns.

Sims’s arm strength has improved on passes to the perimeter. He shows touch on the football in deep passes downfield. His exceptional footwork helps him extend plays. Sims keeps his eyes downfield, even when running. His elusiveness is a nightmare for opposing defenses.

Sims doesn’t have elite size, but compensates for it with decent decision making. He tends to overthink and double clutch at times, resulting in poor throws. Sims looks to be the first Alabama quarterback in the 2000s era to have a successful career in the National Football League.

Summary: Like Sims, Hutson Mason had to wait for his time at Georgia. He was a record-setting passer in high school, but sat behind Aaron Murray for much of his collegiate career.

Murray battled injuries in 2013, forcing Mason to step up. He had some solid performances and exuded poise beyond his years. Mason recorded 968 yards, five touchdowns and three interceptions in 2013.

He blossomed under the leadership of offensive coordinator Mike Bobo in 2014. Mason completed 67.9 percent of his passes for 2,168 yards, 21 touchdowns and four interceptions. He guided Georgia to a 10-win season and a 37-14 victory over Louisville in the 2014 Belk Bowl.

Mason has a quick release, despite lacking a big-time arm. He steps up well in the pocket and displays a pretty deep ball. Mason has sound vision downfield and leads receivers with pinpoint passes. He’s isn’t a dual threat quarterback, but Mason can get yardage on the ground when needed.

Mason’s confidence on deep passes needs to improve. His vision is reluctant under pressure. Mason tends to lock onto one receiver, telegraphing passes occasionally.

Summary: He’s from Mississauga, Ontario (Canada), but playing in Mobile, Ala., may help Brandon Bridge secure a career in the NFL. He threw for 1,927 yards, 15 touchdowns and eight interceptions last season at South Alabama. Bridge ends his tenure with 2,325 yards, 21 total touchdowns (16 passing, 5 rushing) and 10 interceptions.

Bridge has the size, speed and arm talent to be productive in the NFL. He’s not afraid of putting passes into tight windows. Bridge’s arm strength on pass to the perimeter is exceptional. His toughness is unquestionable, as Bridge played through an ankle injury for much of November 2014.

He has decent vision, but Bridge has to do a better job of looking off defensive backs. Most of his attempts are bullet passes. Receivers have struggled catching them cleanly. Bridge needs to develop a consistent pace on his throws, giving receivers an opportunity to make plays.

Mannion has the size and strength of a prototypical NFL pocket passer. His touch on short and deep passes is impressive. He has the arm strength to make any pass. Mannion’s throwing motion is crisp, and he is well experienced in a pro-style offense.

Mobility is an issue, but Mannion’s biggest problem is a lack of poise under pressure. He tends to take a lot of sacks when his first read is taken away. Mannion drops back further into the pocket in pressure situations, rather than stepping up to throw the ball away.

Summary: Jim McElwain (now at Florida) mentored Garrett Grayson at Colorado State, after a solid career at Alabama as its offensive coordinator from 2008-11. Grayson completed at least 60 percent of his passes, while totaling 3,000+ yards in his final two seasons (2013, 2014).

Grayson has good footwork in the pocket to go along with solid instincts. He’s balanced when rolling out of the pocket, displaying good accuracy on passes. Grayson excels at leading his receivers away from hits. He’s good at placing passes in ideal areas on the field.

Grayson’s arm strength on passes toward the sidelines wasn’t tested at Colorado State. His throwing motion is interesting, yet troubling. He struggles with anticipation on throws. Grayson tends to allow his receivers to fully complete routes before getting them the ball.

Summary: Robert Griffin III (2008-11) put Baylor football on the map, but Bryce Petty maintained it during his tenure. He collected 3,855 yards, 29 touchdowns and seven interceptions in 2014. Petty led Baylor to 11 wins and a Big-12 Conference title last season.

Baylor’s pass-happy offense structured Petty’s timing with pinpoint throws. He has size, mobility and toughness. Petty is lethal when he gets into a rhythm. If given time to throw, he is an efficient passer on intermediate and vertical routes.

Petty shows inconsistency when it comes to moving through progressions. He tends to focus on one receiver, causing him to force throws at times. He was constantly in shotgun formation at Baylor, limiting the option of using his feet.

Summary: Joining Marcus Mariota and Sean Mannion, UCLA’s Brett Hundley looks to be one of few Pac-12 quarterbacks selected in this year’s draft. He engineered a 10-win season and a 40-35 victory over Kansas State in Valero Alamo Bowl.

Hundley has all the physical tools needed to be successful in the pros. He has an athletic frame, great footwork and stellar arm strength. He’s accurate, yet aggressive with his throws. Hundley isn’t afraid of challenging defensive backs on deep passes. He buys time in the pocket with his vision, and has improved on setting his feet consistently.

Hundley, like many Pac-12 quarterbacks, lacks experience in other formations. He took every snap from the shotgun in his career at UCLA. He needs to improve his poise under duress.

Summary: Chip Kelly (now in the NFL, Philadelphia Eagles) coached Oregon into a national powerhouse, but Marcus Mariota continued the momentum after he left. Mariota guided Oregon to 13 wins, a Pac-12 Conference championship and a College Football Playoff appearance.

He tossed for 4,454 yards, 42 touchdowns and four interceptions in 2014. Mariota ends his career with only 14 interceptions. He’s accounted for 10,796 passing yards and 105 touchdowns. Mariota’s done damage on the ground, posting at least 700 rushing yards in all three seasons as a starting quarterback. He put in 770 yards and 15 touchdowns on 5.7 yards per carry last season.

Mariota was recognized for numerous awards in 2014, including a Heisman Trophy, Davey O’Brien Award and Associated Press Player of the Year. He became the 79th player and the first Oregon player to win a coveted bronze award.

Mariota has intelligence and a solid work ethic. He can pick defenses apart with his arm, as well as outrun them on foot. He’s not afraid to challenge defenders with tight passes. Mariota shows great touch on deep balls and possesses a quick release. He consistently has his eyes downfield.

He’s been a shotgun quarterback throughout his career. Mariota lacks experience taking the ball from under center. Oregon’s fast pace offense limited his ability to thoroughly scan the field. Mariota occasionally commits the cardinal sin of throwing across his body, due to his tendencies of locking on too much to one receiver.

Summary: Head coach Jimbo Fisher and Jameis Winston were able to keep things together, despite Winston’s off-field mishaps at Florida State. The Alabama native had a roller coaster year in 2014, after securing a Heisman Trophy in the previous season. Winston completed 65.3 percent of his passes for 3,907 yards, 25 touchdowns and 18 interceptions last season.

He led Florida State to an undefeated regular season, an Atlantic Coast Conference title and an appearance in the College Football Playoff. Winston was a member of the Seminoles’ national championship team in 2013. He accounted for 40 touchdown passes during the season.

Winston finished his career with 7,964 passing yards. He doesn’t run much, but does possess mobility. He chimed in with seven rushing scores in his tenure at Florida State.

He’s the most NFL-ready quarterback heading into the 2015 NFL Draft. Winston has size, athleticism and a talented arm. He moves well in the pocket and has the intangibles to lead a team. Winston made clutch plays in crucial moments for Florida State in 2014, delivering it to numerous comeback victories in the fourth quarter. He excels at anticipating passes, in which he gets receivers the ball before they get out of their breaks.

Winston has a big-time arm, but needs to shorten his delivery. His maturity must improve off the field. He does have a tendency to lock onto one receiver. Winston has to hone in on reading his keys.

*= Denotes quarterbacks that didn’t work out at the NFL combine. 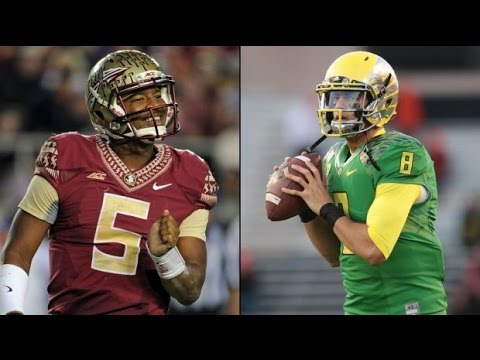