He entered the University of Alabama as a myth, but junior running back Derrick Henry will have the backfield to himself this fall. The 6-foot-3, 242-pound Henry is coming off a monster season in 2014, as he accounted for 990 rushing yards with 11 touchdowns on 5.8 yards per carry. Alabama’s head coach Nick Saban praised Henry on his leadership and work ethic during the team’s offseason program. He said Henry finished in the top three in each workout.

Since 2008, Alabama’s offense has claimed success by using two running backs. Coach Saban would pair up players that mirrored each other in style and physical build. Both backs would see an equal amount of field time, and it gave the offense a change of pace.

This season, however, will be different. Alabama doesn’t have a back that resembles Henry’s physicality, aside from Bo Scarbrough (knee injury). It returns Kenyan Drake, but the senior will be more of a hybrid player in offensive coordinator Lane Kiffin’s scheme.

Henry’s known for his toughness as a downhill runner, but he’s improved his footwork and has shown that he can bounce plays outside. He’s prepared himself to be a featured back by adding on weight, watching film and guiding Alabama’s young players through drills in spring practice. True freshman Damien Harris could be the deciding factor in Henry’s chance of getting the lion’s share of carries. Harris, a Kentucky native, is a five-star recruit. The 5-foot-11, 205-pound Harris was a stud at running back for Madison Southern High School.

He tallied 6,717 rushing yards with 111 touchdowns for his career. Former Alabama running back and Kentucky native Shaun Alexander has given Harris his blessing to be next great Crimson Tide star from the bluegrass state. Mark Ingram, Trent Richardson, Eddie Lacy and T.J. Yeldon all made an impact as freshmen. If Harris can learn the system and make solid adjustments this summer, he will have a legitimate shot at accumulating carries.

2015 could be a Heisman-like year for Henry. The Florida native was a household name at Yulee High School. He recorded 12,124 career rushing yards, and captured the Maxwell Football Club National High School Player of the Year Award in 2012. He enrolled at Alabama in 2013 as a five-star prospect and hasn’t looked back. Henry will wear No.2 this season in honor of former Alabama wide receiver David “The Deuce” Palmer. He’s put in the work to be the main guy, but will Kiffin feed him more in 2015? Wisconsin gets the first taste in August.

Stephen M. Smith is a staff writer and columnist for Touchdown Alabama Magazine, Pick Six Previews and SB Nation. You can “follow” him on Twitter, @ESPN_Future 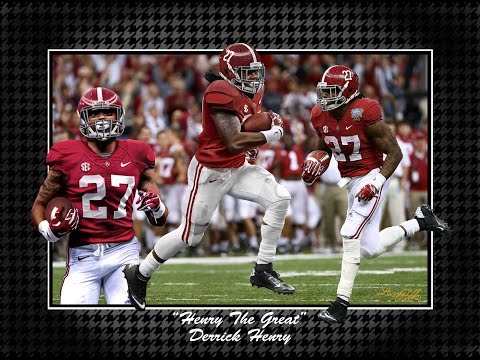