He wasn’t as huge as Johnny Musso or Major Ogilvie, but there was something special about former Alabama running back Linnie Patrick. He possessed a combination of power and speed with very strong legs. Patrick emerged on the scene, during the latter years of legendary head coach Paul W. “Bear” Bryant.  He played for the Crimson Tide from 1980-83.

Patrick was productive as a freshman in 1980. He saw action in 11 games, totaling 361 rushing yards with three touchdowns on 50 carries. Patrick averaged 7.1 yards per carry, and helped Alabama finish the season with a 10-2 record, culminating in a 30-2 victory over No.6-ranked Baylor in the 1981 Cotton Bowl.

Disciplinary issues landed Patrick in Bryant’s doghouse for much of his sophomore season. He averaged 5.5 yards per carry, but recorded 332 yards rushing with five touchdowns on 60 carries in nine games. Patrick’s character began to change during the latter part of the year.

He took what coach Bryant said to heart, and improved as a player and a person. Alabama’s meeting with Auburn in the 1981 Iron Bowl saw it all come together for Patrick.

The Crimson Tide trailed Auburn 17-14 in the fourth quarter, when sophomore quarterback Walter Lewis found Jesse Bendross for a touchdown. The score gave Alabama a 21-17 lead, however, it needed one last drive to put the game away.

Auburn got a heavy dose of Patrick in Alabama’s final drive. His 33-yard run on a sweep play is featured in the program’s “Our Tradition” video for every home game. Patrick secured the ball, maintained his balance, and was able to shake loose from wimpy tacklers.

He ended Alabama’s drive with a 15-yard touchdown run. The Crimson Tide took a 28-17 lead and did not look back. It would go on to win the contest by the same score, securing Bryant’s 315th career victory. The win pushed Bryant ahead of Amos Alonzo Stagg, making him the winningest coach in college football history at the time.

Alabama managed to go undefeated (6-0) in the Southeastern Conference in 1981. The Crimson Tide ended the season as Co-Champions of the SEC with the Georgia Bulldogs.

Patrick averaged 4.5 yards per game in nine games, during the 1982 season. He put in 316 yards with four touchdowns, and Alabama finished the year at 8-4. It was coach Bryant’s final season and despite losing 23-22 to Auburn, he guided Alabama to 19 of 25 Iron Bowl victories in his tenure. The Crimson Tide did defeat Illinois 21-15 in the Liberty Bowl.

As a senior, Patrick had his best season in 1983. He chimed in with 454 yards and four touchdowns on 85 carries in 11 games. Alabama finished the year at 8-4, under first year head coach Ray Perkins. Patrick averaged 5.3 yards per carry, and the Crimson Tide defeated No.6-ranked SMU 28-7 in the Sun Bowl. Patrick played in 40 games in his career at Alabama.

He tallied 1,463 rushing yards with 16 touchdowns on 5.5 yards per carry. Patrick compiled a 35-12-1 record, and saw action in four bowl games. His five rushing touchdowns in 1981 was good for fifth in the SEC. Patrick’s 5.3 yards per carry average in 1983 was good for seventh in the conference. He has a .500 record in the Iron Bowl, defeating Auburn two out of four times. 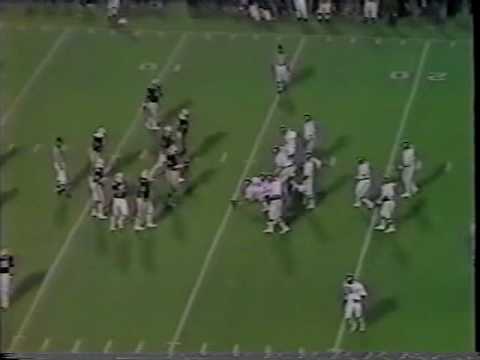