Senior quarterback Jake Coker still has a fight in this competition. The former Florida State transfer was expected to be Alabama’s starting quarterback in 2014, yet inconsistencies in fall camp allowed Blake Sims to secure the job and have a successful season.

With Sims gone, the Crimson Tide returns to square one and Coker once again has been tabbed as the signal-caller. Coker, 6-foot-5, 232 pounds, saw action in six games last season.

He completed 38 of 59 passes for 403 yards and four touchdowns. Coker seemed uncomfortable at times because he had to learn a new team, offensive system and coaching staff on the fly. He’s bonded well with teammates entering year two under Alabama’s head coach Nick Saban, yet a question still remains about his abilities on the field.

According to Matt Zenitz, Alabama football beat writer for al.com, Coker has been working with quarterbacks coach David Morris in his hometown of Mobile, Ala. Morris, a former Ole Miss quarterback, has trained the likes of Eli Manning, Tim Tebow, Matt Barkley and AJ McCarron.

He had a decent showing in Alabama’s spring game, but his interception to defensive back Maurice Smith was a play Coker’s wishes to have back. Smith returned the interception for a 51-yard touchdown, capping one of few throws that Coker didn’t place on target.

He completed 14 of 28 passes for 183 yards with one touchdown and an interception.

He has all the physical tools to be successful, but Coker needs to continue improving on consistency and releasing the football quicker. He has the ability to put the ball on a frozen rope to receivers, however, Coker needs to have a firm grasp on what offensive coordinator Lane Kiffin wants him to do. Morris said Coker “looks good” and “looks ready” for this season.

The Crimson Tide has five quarterbacks on its roster. Coker and redshirt freshman David Cornwell are battling for the starting job. Coach Saban’s main concern is protecting the ball.

Alabama doesn’t need an All-American arm with the talent it has returning. It’s tabbed to have the best defensive front seven in college football and a solid run game. A quarterback that can make big time throws, exude confidence in the huddle and manage the game is what it needs.

Cornwell is pushing the envelope, but for now, don’t count Coker out of the conversation. 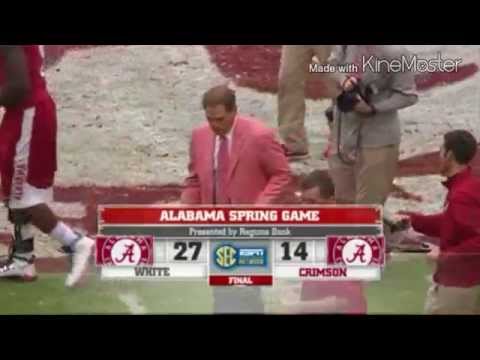