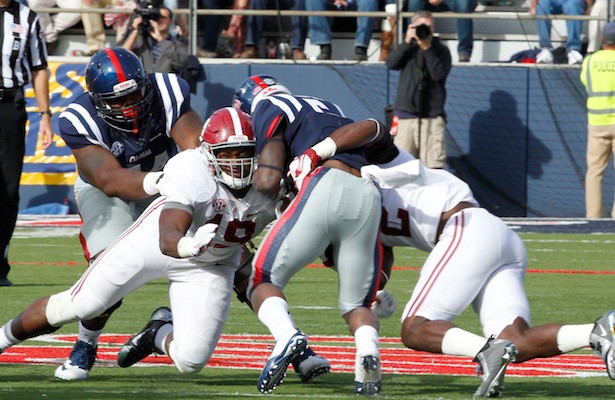 Can the Crimson “Crash” contain the Rebel “Flash”?

Ole Miss Flash vs Crimson Crash. Will Defense Win In This Game?

No doubt about it, Ole Miss has flash. This offense is clicking like a Swiss watch and putting up points like an NBA team. Likewise, the defense has brought back memories of the “Landshark” defense. Together, in two games so far, they’ve averaged over 70 points per game and held opponents to just a 12 point average. Now that’s flash.

So how does Alabama have a chance?

But things like that mean little when the ball is snapped and bodies collide.

Alabama is sure to get their points against Ole Miss. Last season, Ole Miss’ defense was the number 13th rated defense. This season, Alabama played Wisconsin who was rated as the fourth best in the nation. Alabama scored 35 points on them this season. Clearly with the offense limping along running vanilla plays and still trying to find a starter, the propensity for Alabama’s offense to finally kick into high gear is great. The Ole Miss offense on the other hand is flying about as high as they’ll get all season and has nowhere to go but down as they start playing quality teams.

This year both teams feel they are better than last season. The Rebel offense thinks they are among the nation’s best, the same thing goes for the Alabama defense. This weekend they’ll clash again and while Las Vegas has Alabama a healthy 8.5 favorite, others see this a clash that could go down to the last team holding the ball.

There’s an age old saying that has been proven more times than not, that defense wins games, and while Ole Miss will make the argument that they have a defense equal to that of Alabama’s, the simple truth is, that’s not correct. Alabama is currently the nation’s 28th rated defense and has played at least one top opponent and one average team while Ole Miss is rated as the nation’s 44th best defense and this is after playing a non division one team and another not so great team rated in the cup cake category. In total defense so far this season, Alabama holds teams to an average of just over 30 less yards than Ole Miss.

Therefore, it’s easy to see who does have the best defense. But does the best dense always win? Not hardly.

On the other hand, there’s no question that Ole Miss has the better offense, at least on paper so far after two games. Currently after two games, they are the nation’s number three offense. To find Alabama, you’ll have to go down that list to number 18. The difference in yardage is about 117 yards more offense a game for the Rebels.

So the real question is, will Alabama’s “Crash” defense be better than the Ole Miss “Flash” offense? That is the question and it won’t be answered until late Saturday night and it will be a great one to watch.