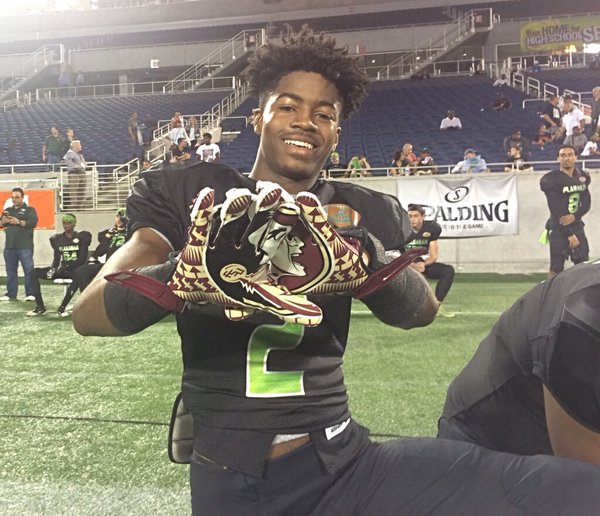 Stanford Samuels III has had some big shoes to fill as he has grown as a player. His father, Stanford Samuels Jr. led Carol City High School to a 15-0 record and a state championship in his junior and senior seasons. Samuels Jr. was rated as the No. 2 defensive back in the southeast by PrepStar and the No. 8 recruit in the state of Florida by the St. Petersburg Times. He would then go on to play at Florida State from 1998-2003 and the Canadian Football League until 2010.

Now it is June 16, 2017 and Samuels III has very much so filled those shoes. He was awarded a 5-star rating on nearly every major recruiting site, was ranked as the third best cornerback in the country, a top five player in the state of Florida and holds 41 college scholarship offers from every Power 5 conference in the country. After taking visits and narrowing down his top 4 schools to Alabama, Florida State, Georgia and Michigan, Samuels III has made a decision and announced it via Twitter.

As expected, the 6’2″, 175 pound Flanagan High School product will follow his father’s legacy in Tallahassee and play for Jimbo Fisher and the Seminoles at Florida State. Samuels fits the mold of the big corner that is seemingly becoming a trend for defensive backs. He will fill out his 6’2″ frame as time passes but he is an athlete that gets to the ball well and has great recovery speed, helping him run with just about any wide receiver. He is a very instinctive player and enjoys stopping the run and those instincts help him become a defensive play maker all over the field.

Florida State has produced some great defensive backs over the years and his father being one of those produced in Tallahassee. Stanford Samuels III has the ceiling and all the natural talent to become one of those guys over the next four years. Although Alabama missed out on Samuels, this only means they will turn up the heat on guys like Ohio State commit Shaun Wade, 5-star corner Darnay Holmes, 5-star Deangelo Gibbs and 4-stars Lamont Wade and Jamyest Williams.
Justin Wagner is the Lead Recruiting Analyst for Touchdown Alabama. You can follow him on Twitter at @jwag718. Also follow @tdarecruiting.
Facebook Comments