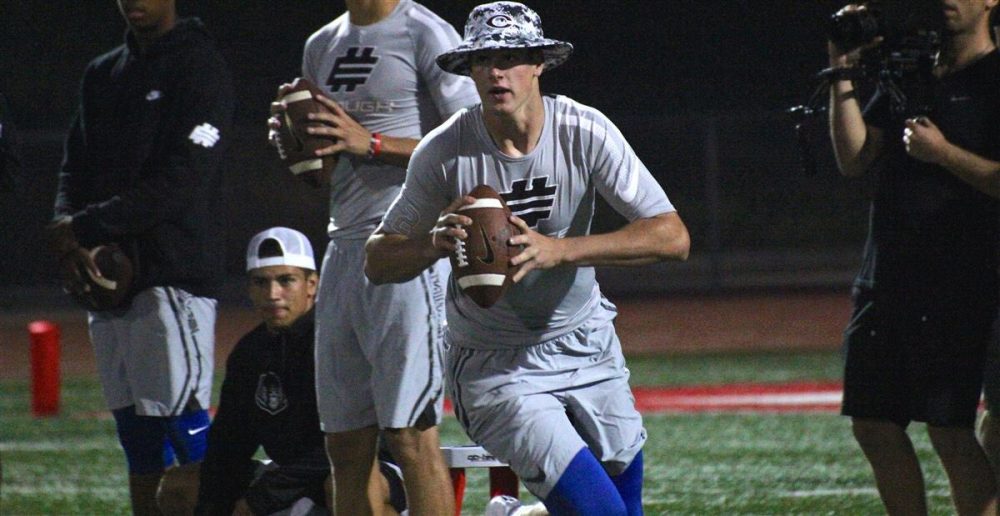 Nike hosted the Opening Camp Finals in Beaverton, Ore.,last weekend. Throughout the camp, college football fans got the opportunity to to see some of the top recruits in the nation compete in 7-on-7 tournaments and linemen challenges.

The 7-on-7 challenges allowed players to compete in a game-like environment to show everyone what they are capable of. Alabama 5-star target, Tanner McKee wasted no time in leaving his mark on the competition.

After siting out Sunday (due to religious beliefs), he led The Untouchables to two wins. McKee threw five touchdown passes in the first game to lead his team to a 31-8 win. He received player of the game honors.

He did not let up throughout the day as he threw for another three scores in the following. This performance led him to another player of the game award, as McKee guided The Untouchables to a 19-13 win over Alpha Menace.

Despite his team falling to Vapor Speed, 20-13 in the second semifinal playoff game, yours truly got the opportunity to speak to McKee about his experience at The Opening. McKee described the entire camp as a great experience.

“It was awesome experience, I loved it,” McKee said. “There were a bunch of great guys in attendance.”

Several teams across the nation are scratching and clawing at the opportunity to land McKee.

The Crimson Tide is one of those schools that are vying for McKee’s services. It is easy to see where all the hype that surrounds this guy is coming from. He is elite, pro-style quarterback that has a very impressive arm.

He discuss that there is not a time frame on his decision as of now. His recruiting is pretty open as many teams are itching to get him on their campus.