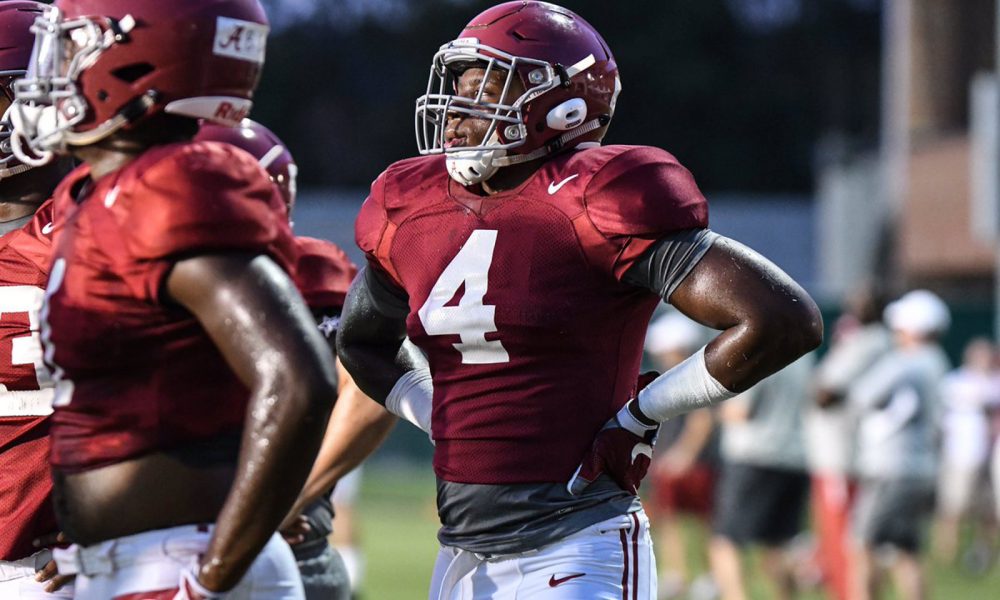 Two names from Alabama’s 2017 signing class on defense will start their collegiate careers sooner than expected.

While head coach Nick Saban would much rather spend a redshirt on freshmen LaBryan Ray and Chris Allen, injuries at outside linebacker has forced both youngsters into action.

After testing Ray, Allen and defensive end Da’Shawn Hand as edge-rushing backers throughout this week of practice, Saban named Ray as one in which the team has acknowledge him being transitioned from the defensive line. Allen may also be seen as a contributor on the outside.

A product of Madison, Ala., Ray was arguably the top player in the state coming from James Clemons High School.

Garnering the status of a five-star prospect, he was listed at No. 17 on the ESPN 300 and recorded 290 career tackles – including a career-best 124 stops as a senior.

During that season in 2016, Ray also turned in 25 tackles for loss, 13 sacks, 16 quarterback hurries, two fumble recoveries and a blocked punt.

The 6-foot-5, 272-pounder has the quick-twitched abilities of a defensive end, but he also carries elite size for a jack linebacker.

Allen, who hails from Baton Rouge, La., was a four-star recruit and one of the top players from the state of Louisiana.

He had 82 of his 194 career tackles in his senior year, while finishing with 14 tackles for loss and six sacks. Under the guidance of former Louisiana State University quarterback Marcus Randle, Allen helped Southern Lab School to a pair of state championship games (2015-16) — including the 2016 Louisiana Division IV state title after a 14-1 record.

With Rashaan Evans and Anfernee Jennings missing this week versus Fresno State and possibly next week, it’s time to see the young bloods take flight.