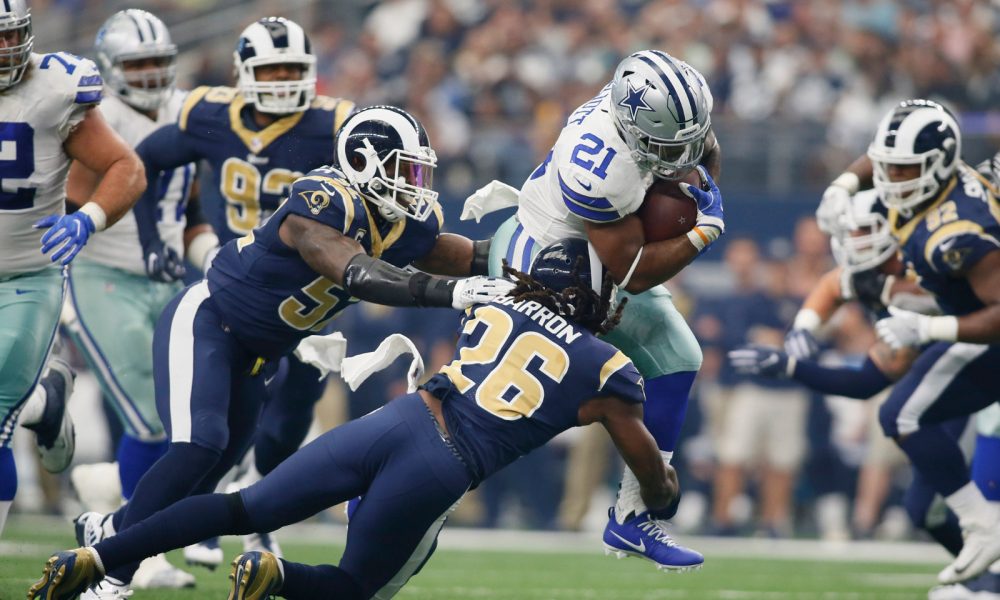 Second-year quarterback Jared Goff is improving and running back Todd Gurley is an absolute animal, but Los Angeles needed a solid performance from Mark Barron versus the Cowboys.

Barron, who is in his sixth season from the University of Alabama, led the Rams in total tackles with eight and captured his first interception of the year in the fourth quarter. He made a heads up play on third down with nine yards to go, as he picked off Dallas’ quarterback Dak Prescott.

Los Angeles would turn Barron’s takeaway into three points, and registered a 35-30 victory on the road at AT&T Stadium. While accounting for one of two miscues, the former five-star safety helped the Rams generate two turnovers and limited Ezekiel Elliot to 85 yards on 21 carries.

In his second season at linebacker, Barron chimes in with 26 tackles.

He finished behind Alec Ogletree in that category last year – totaling 118 tackles, one sack and two interceptions through 16 regular season games. Before the National Football League, Barron was a household name at Saint Paul’s Episcopal School in Mobile, Ala. He excelled in running back, wide receiver and linebacker from 2004-07, and then enrolled in Alabama’s 2008 class.

Barron became a force during the 2009 season, posting 74 tackles, 3.5 tackles for loss, 11 pass breakups and a team-high seven interceptions. He went on to help the Crimson Tide obtain its first Southeastern Conference and BCS national championship of the Nick Saban era.

Two years later, he led a defense that was No. 1 in all five major categories.

A second national title came in 2011, helping Barron become a first team All-SEC selection (2009-11) and first team All-American player (2010-11). He was selected 7th overall in the 2012 NFL Draft by the Tampa Bay Buccaneers, but would be traded to the Rams after three seasons.