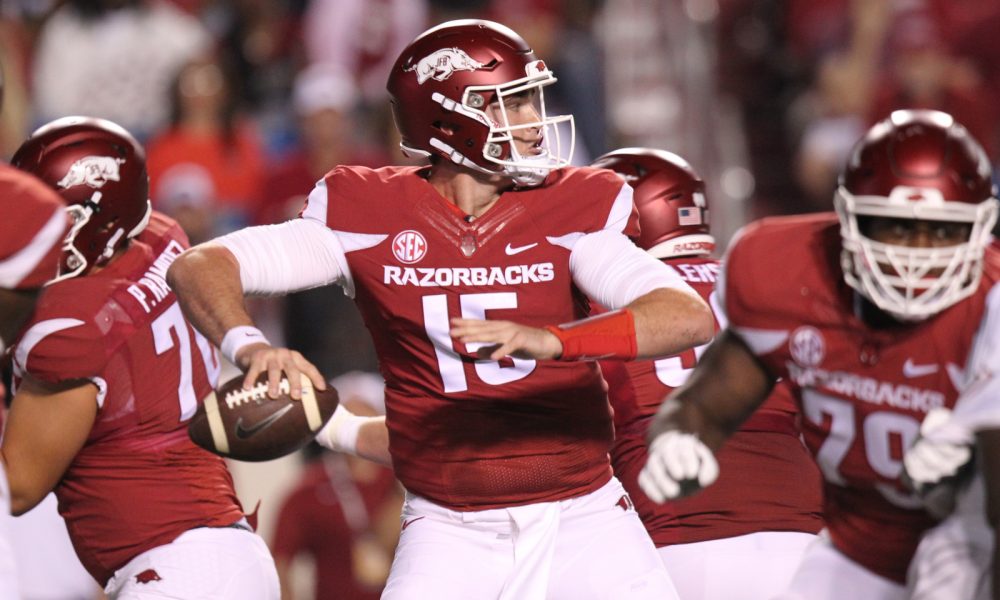 Two different messages are being preached this week.

For Alabama, head coach Nick Saban always stands firm on discipline, attention to details and making sure players keep themselves in a winning frame of mind. Arkansas, on the hand, is hoping to just have a quarterback ready for battle as the Razorbacks travel to Tuscaloosa.

After sustaining a shoulder injury versus South Carolina, no confirmation has been made on whether senior Austin Allen will be under center or not. During his first-year starting, Allen threw for 3,430 passing yards with 25 touchdowns to 15 interceptions in 13 games last season.

He was one of three quarterbacks to throw for 400 yards on Alabama’s secondary, joining current NFL signal callers Chad Kelly (Ole Miss) and Deshaun Watson (Clemson). Razorbacks’ head coach Bret Bielema has been close to an upset victory in the previous three years; however, the possibility of starting a redshirt freshman at Bryant-Denny Stadium could spell serious doom.

Cole Kelley, a native of Lafayette, La., will get the call if Allen can’t go.

The 6-foot-7, 268-pounder was a three-star recruit via 247Sports, Rivals and Scout networks, when he arrived on campus after his career at Teurlings Catholic High School.

While Saban knows the arm talent and athleticism of Allen, he is not shying away from having his team adjust to what it could see in a different guy. In taking the podium for Wednesday’s presser, he said most times for Alabama the opponent has done things differently.

“I’m not sure they will change their offense, but when he has played, they’ve done more quarterback runs,” Saban said on Kelley. “When I first started watching film, I thought he was a wildcat quarterback that was at tight end. But, as he’s played more, he has a good arm.”

Kelley saw a lot of action in Arkansas’ meeting with South Carolina, chiming in 140 yards with one touchdown and an interception in a 48-22 loss. He’s attempted 18 passes and has thrown for 186 yards with three scores in four games, but success over Saban is a tall task.

“We don’t know if they’ll change styles with him at quarterback, so we’ll have to prepare for something they could do with him,” Saban said. “But, we can’t change because we don’t know.”

Homecoming festivities should be fun; nevertheless, Saban and company will be more focused on being able to adapt to Arkansas’ scheme and pull out its seventh win of the season.