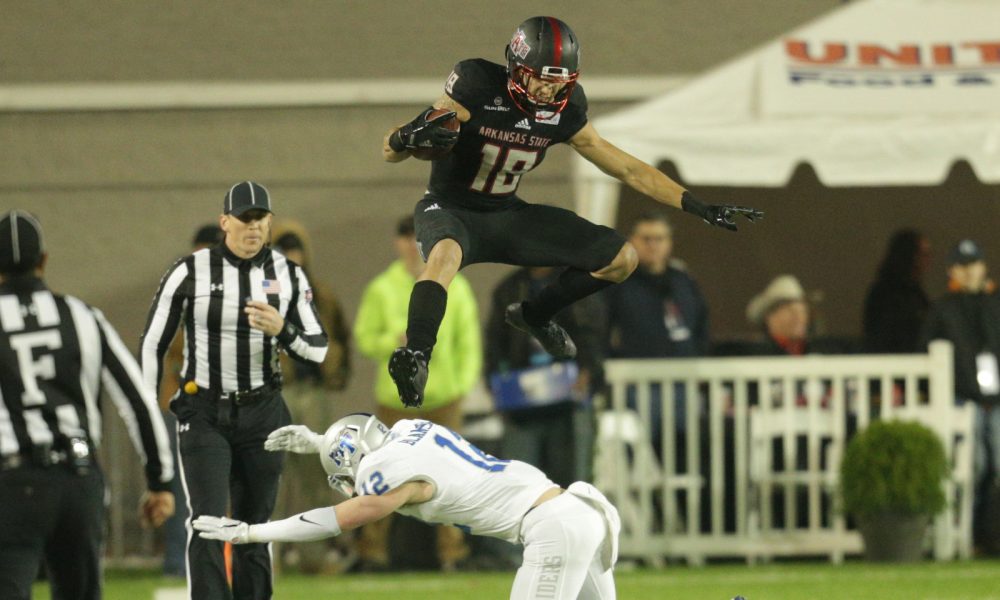 These plans of assuring victories over Alabama football have gone too far.

Seeing programs like Washington, USC and Louisville among others holding “We Want Bama” signs and talking bold is one thing; however, to see a school like Arkansas State do this is hilarious. After shutting down the Cardinals’ receiving corps and holding that offense to 14 points last week, the Red Wolves believe it can defeat the Tide in Tuscaloosa on Saturday.

Hailing from the Sun Belt Conference, Arkansas State finished 7-6 in 2017 and kicked off this campaign with a 48-21 win over Southeast Missouri State. Going into Bryant-Denny Stadium provides a daunting task for the institution, but one player believes the Red Wolves have a chance.

Justin McInnis, senior wide receiver, posted 800 yards with four touchdowns on 49 receptions last season in his second year at Arkansas State. He arrived in 2016 as a junior college transfer from Dodge City Community College, and at 6’6” and 206 pounds, McInnis has the physicality, speed and playmaking abilities to give defenders headaches. On the heels of his performance versus Southeast Missouri State – four catches, 48 yards, one touchdown – McInnis feels really good about what he and his teammates will walk into in terms of facing a dominant program.

“It will be a difficult task but I am confident,” McInnis said on Twitter in talking about facing the Crimson Tide. “I am confident in all our guys, that we will go out there give it our best effort and beat them pretty good.”

According to Chase Gage, who covers Arkansas State for Red Wolf Report, McInnis continued the conversation on Alabama by stating “this is just another game” and “I know we have one of the best receiving corps in the nation, so if we go out there and play how we can play, the sky is the limit.”

A real quote from Justin McInnis on Alabama:

“Its just another game. I know we have one of the best receiving corps in the nation, so if we go out there and play how we can play, the sky’s the limit for our group. I’m definitely confident”

Major disappointment followed as all four expectations were met the Crimson Tide completely destroying their goals. On the other hand, Saban did bring up Arkansas State’s quarterback and how its “fastball” offense could present some challenges. Justin Hansen returns for a third straight year as the starter, and after turning in a 3,000-yard outing in 2017 (3,967) with 37 touchdown passes, he’s recorded six scores thus far and looks to shred more defensive backs.

Will McInnis back up his claim? Do the Red Wolves pose as a challenge?

All will see this weekend as ESPN2 is airing the matchup at 2:30 p.m.