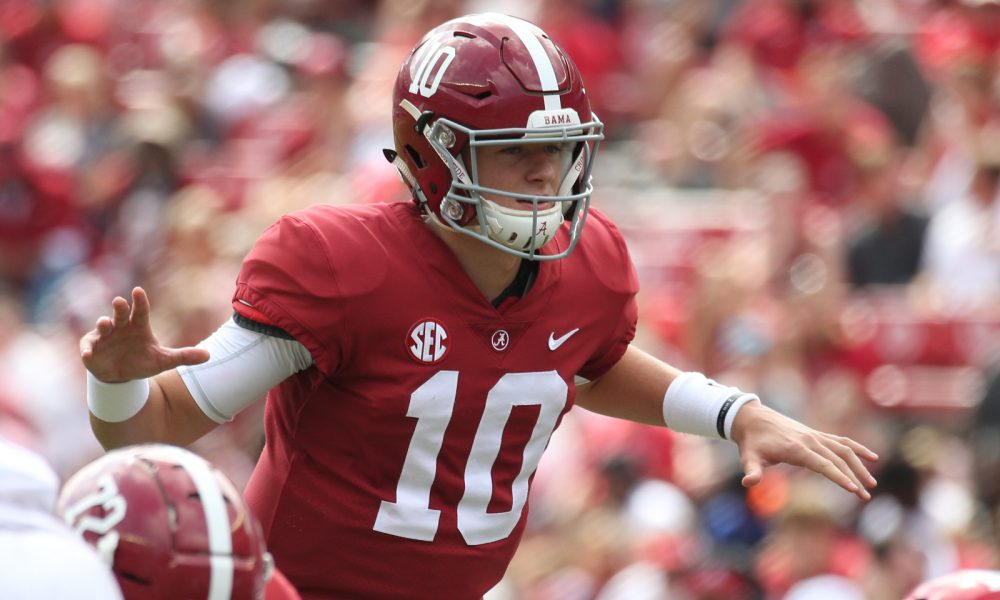 For a young man that is still growing into his character and his body, Mac Jones delivered a notice to college football in stating how Tua Tagovailoa and Jalen Hurts aren’t the only guys setting records at the University of Alabama.

What should have been a simple 10-yard slant pattern, turned into Jones sharing a piece of history on last week in the Crimson Tide’s 56-14 win over Louisiana.

The redshirt freshman from Florida came off the bench late in the third quarter, and after Alabama was hit with a holding penalty, Jones responded by firing a dart to true freshman receiver Jaylen Waddle.

After his first two meetings with the painted grass went well, Waddle left the Ragin’ Cajun defense in a cloud of dust – taking the 10-yard pass an extra 84 yards for what ended up being recorded as a 94-yard touchdown. Jones, a former four-star prospect, not only extended the Tide’s lead to 56-0 with his efforts, but the play also earned him his first career touchdown.

In typical Jones fashion, Alabama’s third-string quarterback celebrated by chest bumping teammates, high-fiving players and received encouragement from both Hurts and Tagovailoa on the sideline.

Per the Crimson Tide’s record book, the Jones to Waddle connection tied for the second longest completion in school history with Freddie Kitchens’ pass to Michael Vaughn that went for 94 yards against Florida in 1996.

Senior running back Damien Harris, a guy Jones playfully views as his father, told the media during player interviews before the season that he’s been very impressed with his son’s poise.

“I used to notice when he would get frustrated at times at get down on himself, but this year it seems like he is a completely different person,” Harris said of Jones. “He’s taken everything in stride. He’s a lot more focused on what he has to do to improve himself as a player and is not focused on external things. His poise and his confidence have skyrocketed.”

Seeing his name amongst former Tide greats should do more for his confidence, as Jones will prepare this program its road game against Arkansas this week in resuming conference action.