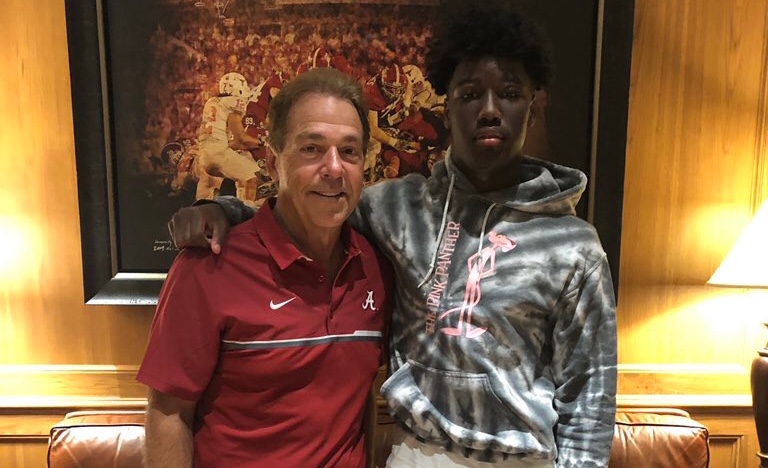 Denver Harris earned an offer from Alabama and Nick Saban after a great showing at camp on Sunday.

#AGTG Blessed with the opportunity to get coached up by Coach Saban and Earn an offer from the University of Alabama #RollTide ? pic.twitter.com/u7X1LpYDrL

Harris is a member of the 2022 recruiting class. The Tide is the eighth Division 1 school to offer Harris. The 2022 recruit said Alabama’s offer means everything to him.

“This offer means the world to me,” Harris said. “Alabama is definitely one of my all-time favorites and being offered by arguably the greatest coach of all time is legendary. I am definitely blessed beyond measures.”

Saban has always personally taken on the role of working with defensive backs and Sunday was no different.  The 6-time national championship winning coach spent some time on the field with Harris during camp working on his game. Saban pulled Harris to his office afterward to discuss his performance and his future.

Harris said their conversation was filled with powerful advice.

“It was positive and insightful,” Harris said. “He let me know that this was just the beginning and not to let the offers or any other hype keep me from staying on my grind on the field and in the classroom. He also let me know that he does not offer freshman often and from this point on, he would be keeping close tabs on everything I have going on. He stressed the importance of staying humble and continuing to work on becoming the best student-athlete I can be.”

The North-Shore product is a fan of what Saban has done during his time in Tuscaloosa. He has great respect for the way Saban and his staff have developed their players and said he feels he can see himself being a part of Alabama’s culture.

“I think it is amazing what he has been able to consistently do for all these years and the number of players Alabama puts in the league is ridiculous,” Harris said. “I could definitely see myself adding to the dynasty and adding my name to the long list of elite athletes to come through the program and go on to the next level and have successful careers.”

Harris reportedly ran a 4.40 in the forty-yard dash at the camp. He stands at 6-1 and weighs 180 pounds. His frame Is packed with muscles and his game has gotten him earlier offers from the likes and LSU and Oklahoma.

The Tide are currently recruiting several players from North Shore High School, including 5-Star running back, Zachary Evans. Harris becomes the latest Mustang to get an offer from Alabama as he is looking forward to working on their relationship.

“I am definitely looking forward to continuing to build my relationship with Saban and the rest of the Alabama staff,” Harris said.