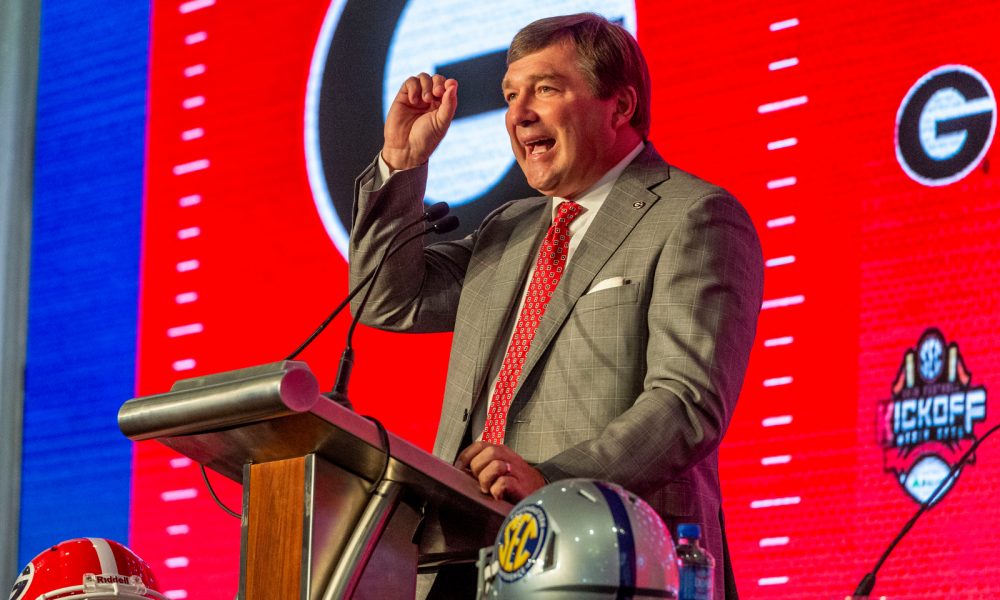 Kirby Smart of Georgia, Jeremy Pruitt of Tennessee and Jimbo Fisher of Texas A&M were the coaches, while Matt Luke of Ole Miss was the outlier.

For Smart, he enters his fourth season as the Bulldogs’ head man and after falling short of a College Football Playoff National Championship and an SEC Championship to his former boss – he looks to finish the job.

Georgia carried at 13-0 lead at halftime in 2018 CFP title game (2017 season) and a 28-14 advantage in the SEC title game, until Saban’s decision to bring in a backup quarterback and coaching miscues from Smart cost the Dawgs in both matchups.

Although he returns Jake Fromm under center and D’Andre Swift at running back, Smart started with a “tongue in cheek” thought on how Georgia can beat Alabama — if the two meet for the SEC title this year.

Kirby Smart on how to beat Alabama…

Tua Tagovailoa and Jalen Hurts both victimized Smart and while Hurts is now at Oklahoma, there is another backup trigger puller that is capable of doing the same thing. In showing concern for someone he looks at as a son, former Tide star Damien Harris wants no one touching Mac Jones.

The redshirt sophomore from Jacksonville, Fla., is competing against Taulia Tagovailoa and Paul Tyson for the right to be behind Tua Tagovailoa.

He performed well throughout the spring and Saban mentioned on how the coaching staff will provide every opportunity for him to show he can run this offense.

Whether it is this year or next year or five years from now, the 2009 BCS National Champion is confident in Smart getting the Bulldogs a title.

.@GregMcElroy says it’s only a matter of time until Georgia wins a national title under Kirby Smart. pic.twitter.com/ENSo3woofa

He wants to get over that hump of Alabama, but is this the year for Smart?

Some people have him as the closest thing to Saban; however, the national championship for an SEC school must come through Bryant-Denny Stadium.