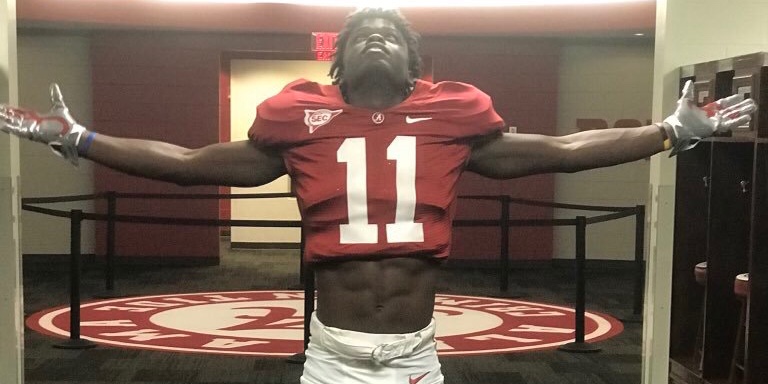 2021 4-Star wide receiver, Ketron Jackson, took an unofficial visit to Tuscaloosa on July 14, where the junior wide receiver got a chance to take a deeper look at Alabama’s football program.

Jackson attends Lancaster High School in Lancaster, Texas. The 4-Star wideout is 6-1 and weighs 175 pounds. Jackson said his visit to Tuscaloosa gave him and his family a chance to connect with Alabama’s staff.

“It was great,” Jackson said. “I love talking with them and the position coach (Holmon Wiggins) held a great meeting with my family and me.”

Alabama offered Jackson on Jan. 17. Jackson also holds offers from SEC programs: Texas A&M, LSU, Arkansas and Ole Miss. Most of Jackson’s Summer was spent running track, which allowed him to take only a few visits.

Jackson said he enjoyed seeing what Alabama has to offer. during his visit.

“They have great facilities and I love the competition and work ethic of their football players,” Jackson said.

The offer list for Jackson is expected to get longer as there is still plenty of time left in his recruitment. It is safe to say Alabama is in a good position with Jackson as he said they are definitely in the race for his commitment.

“They are a winning team and that is no doubt,” Jackson said. “They compete at the highest level and succeed at it. They are definitely a place I am considering playing, not only because of their success but because of the great coaching staff on hand.”

Jackson has explosive speed in the open field, which is the part of his game that translates to the track. Lancaster High school attempted to get him in open space as much as possible during his sophomore season. The Texas product is expected to play an even bigger role in their offense this upcoming season

Alabama’s 2021 recruiting class has two commits currently in Latrell McCutchin and Drake Maye. The Tide will look to capitalize on their solid relationship with Jackson.

WATCH: Xavier McKinney believes in Alabama’s secondary
Najee Harris Shares What He’s Learned so Far at Alabama
To Top
%d bloggers like this: