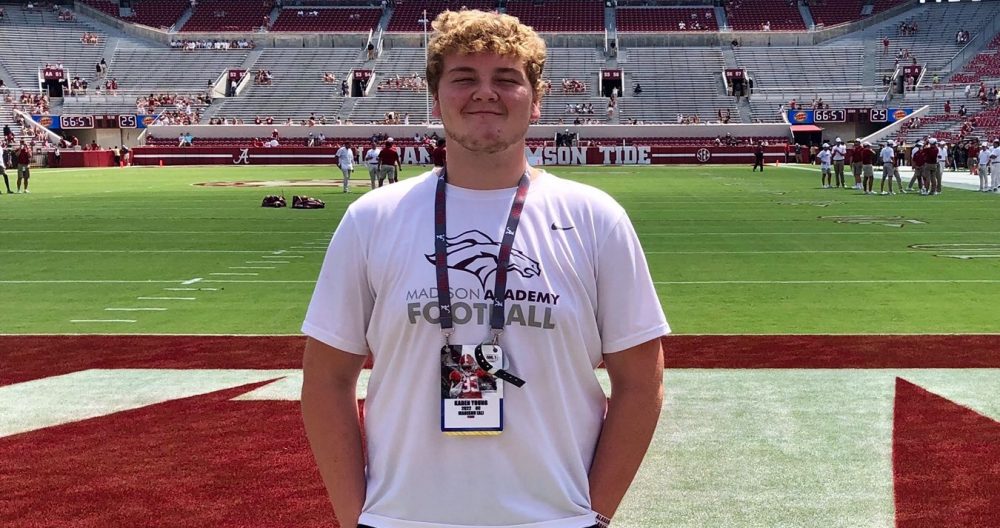 2022 offensive lineman, Kaden Young, is expected to be one of the top linemen in the 2022 recruiting class and Alabama is showing interest early in the in-state prospect.

Young is a product of Madison Academy in Madison, Alabama. The Tide hosted young for their season opener against New Mexico State on Saturday. The 2022 recruit said the visit gave him an opportunity to talk to Alabama’s staff and view their facilities.

“It was great,” Young said. “I was able to talk to a lot of coaches like coach (Kyle) Flood,  (Andy) Kwon and (Nick) Saban. I was able to tour the facilities and I had a great time watching the game. It was overall a great experience. I am just really honored to be able to have this opportunity and be recruited like this as only a sophomore.”

SEC schools, LSU, Auburn and Vanderbilt, also showed interest in Young during the Summer as he traveled around and competed at several camps. Young expressed he has always been impressed with the success Alabama has had.

“It is one of the top tier programs in the nation and is run by one of the best college coaches to ever live in Saban,” Young said. “I have always been impressed with the program and always dreamed of being a part of it.”

Young currently weighs in at 300 pounds and stands at 6-4. Madison Academy started Young as a freshman at the center position. During Young’s freshman season, the 2022 offensive lineman was constantly a bully as his size gave him an advantage over most defensive linemen.

The ceiling is very high for Young at the moment as he is only a sophomore and will continue to develop. Alabama has not put an offer on the table as of yet, but one could be en route in the future.

Alabama has its kicker in Will Reichard after matchup versus N. Mexico State
WATCH: Alabama OLB commit, Quandarrius Robinson, shows explosiveness off the edge
To Top
%d bloggers like this: