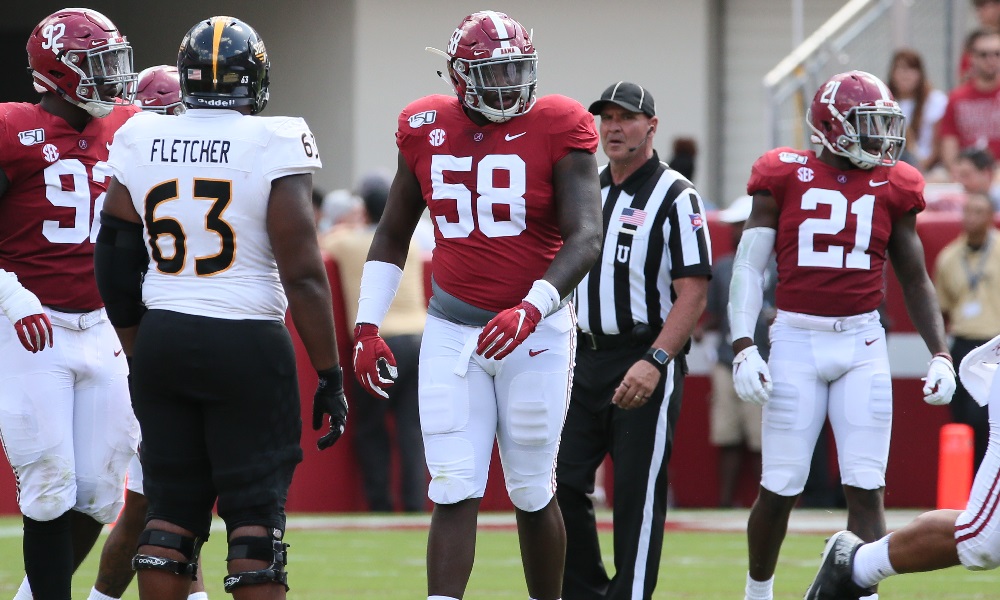 The Alabama Crimson Tide made quick work of the Southern Miss Golden Eagles on Saturday to the tune of a 49-7 drubbing. The blowout allowed the Tide to again take advantage and use it as an opportunity to get as many young players reps as possible.

One player in particular took Nick Saban and Defensive Coordinator, Pete Golding’s challenge, and raised it by completely dominating the final minute of the contest. That player was none other than redshirt freshman, Christian Barmore.

Barmore, who hails from the Philadelphia, Pa. area, has seen action in three consecutive games for the Tide, and has made some form of impact in all three.

A consensus 4-star recruit, Barmore stands 6-foot-5, and a stout 310 pounds. Size alone was not the only thing that stood out for Barmore, but the relentless and tenacity shown each snap since taking the field late in the third quarter.

However, it was his performance on Southern Miss’ final drive that may give Saban and company cause for pause as to whether the talented freshman can be inserted more frequently.

In the final 1:37 of the contest, Barmore wasted little time making his presence felt as he split a double-team and swallowed Southern Miss running back, Darius Maberry for a minimal gain. On the ensuing play, Barmore knifed through and took down Maberry again, this time for a 5-yard loss. On the final play, Barmore, shed a block and dismantled Maberry to end the game, and secure the hat-trick. For his efforts, Barmore was credited with 3 tackles (one for loss) on the game.

What stands out the most is Barmore’s aggressive style. Along with his stature, he is reminiscent of former Tide defensive lineman standout, Marcell Dareus. Dareus, who was overlooked and considered a 3-star recruit by various outlets, saw action as a true freshman in 2008, and was a force for the 2009 BCS Championship team.

For a defense marred by injuries thus far, Barmore’s performance could help add depth and his nonstop motor would be welcomed to Golding’s defense.