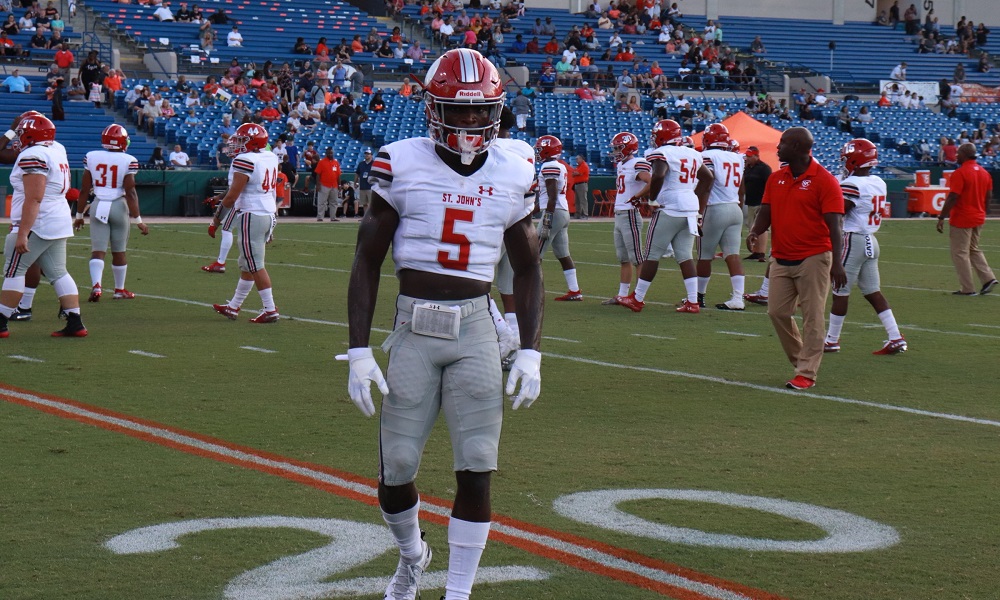 2020 5-Star wide receiver and LSU commit, Rakim Jarrett, has set an official visit to Alabama, according to a tweet, the 5-Star posted on Thursday.

Jarrett will be in Tuscaloosa on the weekend of Oct. 26, which is when the Tide hosts the Arkansas Razorbacks.

The 5-Star recruit is a product of St. John’s High School, which is the same high school Alabama players, Keilan Robinson and Terrell Lewis, attended. The D.C. product announced his verbal commitment to the Tigers on April 27.

Alabama’s head coach, Nick Saban, has always had high praised for Jarrett. According to Jarrett, Saban once compared him to an elite former Alabama wide receiver in the past.

“It was definitely a shocking experience speaking directly to him,” Jarrett told Touchdown Alabama after Alabama offered him. “It was really nice of him to say I reminded him of Amari Cooper, but tougher.”

Jarrett also has great respect for the wide receivers, Alabama has produced.

“In my opinion, Alabama is WRU,” Jarrett told Touchdown Alabama in July of 2018. “The top guys at the pro and college level are from Bama and they play at the highest level of football, the SEC.”

Nick Saban updates injuries on Alabama’s Will Reichard, DJ Dale
UA safety Jordan Battle was ready to be a starter before arriving on campus
To Top
%d bloggers like this: