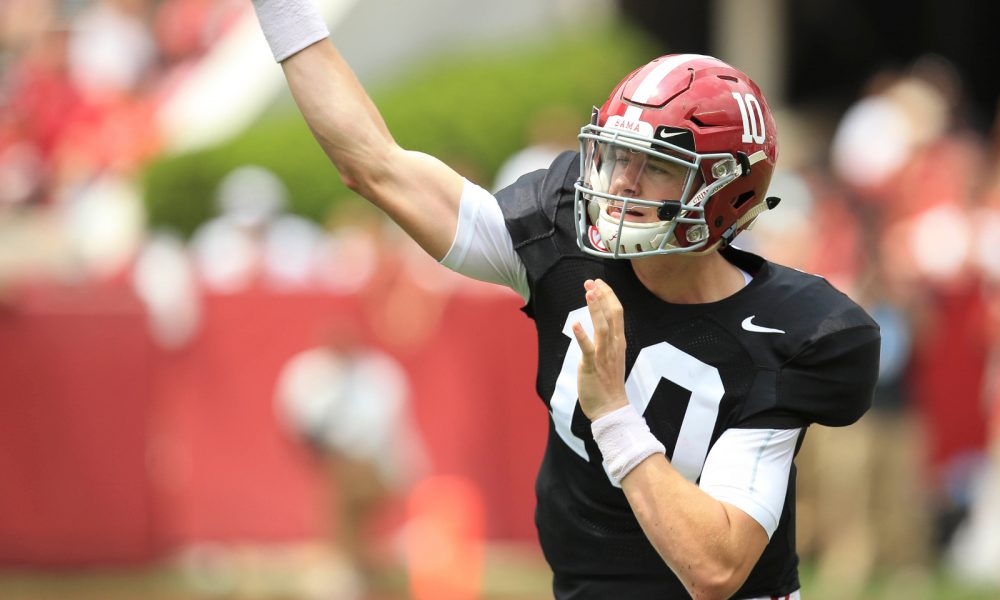 He is not Tua Tagovailoa, but he is an Alabama quarterback and he needs your support.

A mixture of emotions have hit Crimson Tide fans all over social media, following an ankle injury to Tagovailoa versus Tennessee.

He will miss this week’s game against Arkansas and instead of backing Mac Jones as the starter, people want Taulia Tagovailoa to get the nod.

Regardless of how talented the true freshman is (and he is), the disrespect being shown toward Jones is uncalled for. He is someone that has been in this system for three years and at a time where student-athletes flee from competition, the redshirt sophomore remained at Alabama.

RELATED: Should Ty Perine take over kicking duties in Will Reichard’s absence?

He has given everything to this program and prior to the start of this season, he took the entire summer to work on his body, footwork and passing mechanics. A native of Jacksonville, Fla., players noticed a completely different man.

Statements that include ‘he looks like a professional quarterback’ and ‘he has really turned it on’ permeated the locker room all offseason.

Throughout his life, Jones has always been doubted.

According to a source, yours truly was told about Jones was two years behind everyone else on the growth track in high school. Even with him having to mature into his body, he still took a small school in Florida – The Bolles School – to a Class 4A state championship as a senior in 2016.

In his first spring game at Alabama in 2017, he was on scholarship yet ESPN referred to him as a walk-on.

He does not get a ton of consistent reps, seeing how Alabama goes away from him as he starts gaining confidence, but negativity always seems take form when he enters the game.

Jones prepares just as hard as anyone else, but probably harder due to the boulder he carries on his shoulder.

External factors want the younger Tagovailoa, but Nick Saban and the players understand this is a moment for Jones to silence all critics.

Miller Forristall, a tight end and a man of faith at Alabama, told local reporters that Jones can ‘throw the crap out of the ball.’

“People underestimate him and he loves it,” Forristall said. “I have faith in Mac and I know how good he is. He plays with a lot of emotions and he’ll be ready to go.”

Upon being asked on the biggest difference between Jones and Tua Tagovailoa, Forristall just smiled and said ‘there is none.’

“Our playbook is not going to change,” Forristall said. “Mac knows who are guys are and he will get them the ball. He has been more consisted. He will be prepared.”

When it comes to the six-time national champion in Nick Saban, he even has confidence in Jones.

After seeing Tagovailoa go down against the Volunteers, the Alabama head coach immediately trusted the four-star in Jones to go on the field and execute. He completed six of 11 passes for 72 yards and actually did some good things. He has been the best quarterback in two spring games, including the one from last April as he outplayed Tagovailoa and led the second team to victory.

Are you a Tide fan because of a particular player or are you a fan because you are deeply invested in the program, no matter who the players are? This is the question for the day.

If you are for Alabama because it is all you know, then there should not be any problems with rallying behind Jones as the starter. He deserves that much respect at the least, in his attempt to hold the fort down for his brother. During an interview with Slade Bolden, another player that was doubted prior to his arrival at Alabama, he said Jones is ‘ready for this moment.’

“I see hard work when I look at him,” Bolden said of Jones after the Tennessee game.

“We were all calm when he came into the huddle. It was no big deal.”

No one likes for its big moment to come at the expense of someone it cares about; nevertheless, you have to take advantage of the windows as they open. If the team is “all in” on Jones and the coaches are as well, then it is time for you as a fan to cheer hard in support of Mac-10.

He has given his all to you, but now it’s your turn to have his back.

Jones will lead the Tide into its homecoming game on Saturday at 6:00 p.m.