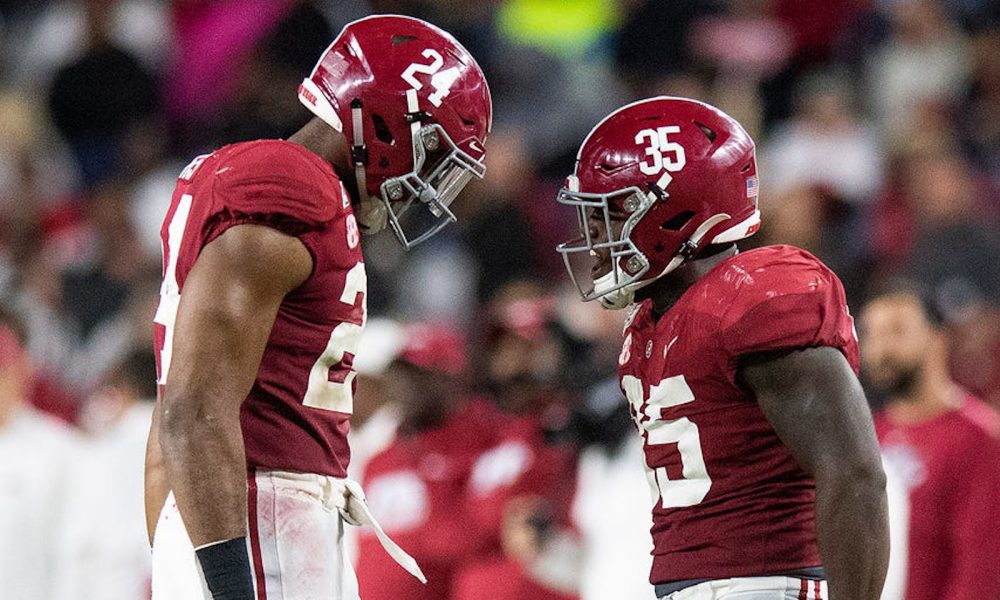 LSU is talking noise, but Alabama is not taking the bait.

After having Monday off, the Crimson Tide had three players available for interviews with reporters and while the biggest game of the year is next week, the focus for this team is continuing to improve through the bye week. It is coming off a 48-7 win over Arkansas.

The trio of Patrick Surtain II, Raekwon Davis and Brian Robinson all said this week is about Alabama and getting better. When it comes to the Tide’s defense, Surtain and Robinson have both noticed huge improvements in the last couple of weeks – especially in communication.

Surtain and company held Tennessee and Arkansas to an average of 10 points per game combined, while forcing six turnovers. Four quarterbacks played in both matchup and the Crimson Tide rendered them to a 46 percent completion rating (23-for-50) for 224 yards with one touchdown to four interceptions. Terrell Lewis has been a menace as he leads the team in sacks (six), tackles for loss (nine) and quarterback pressures (12) and Alabama is starting to execute its best football at the right time.

“The secondary as a whole has stepped up a ton with helping the young guys at the linebacker level and they are coming together as a team,” Robinson said. “Our biggest strides have mainly come in the secondary and with the linebacker core, they have been playing better every week.”

Speaking of the secondary, the group was responsible for two defensive touchdowns in the last two weeks.

Trevon Diggs, senior cornerback, posted a 100-yard fumble return for a score against Tennessee and then followed it up with an 84-yard interception return versus the Razorbacks.

It also does not hurt to have players such as Lewis and Anfernee Jennings providing nightmares for quarterbacks on the edge.

The health of both guys has gone a long way into the team showing signs of vintage groups from recent years.

According to Raekwon Davis, the effect that Lewis and Jennings have on the defense gives opposing signal callers ‘no chance’ to make a move.

“Either you gotta throw it away or take a sack,” Davis said on the options a quarterback has when facing Lewis and Jennings. “You ain’t coming through the middle.”

Even with better communication and the focus on this week, Davis did take time to recognize how far LSU has come on offense. With the leadership of Joe Burrow as its trigger man, the Tigers were scoring 52.5 points per game – until it faced both Mississippi State and Auburn.

Regardless of both schools holding it to 36 and 23 points respectively, the senior defensive end referred to LSU’s unit as the ‘best’ offense Alabama will see.

“They have great guards, great tackles and the quarterback is great too,” Davis said.

“When they run the ball, the offensive line tries to get downhill. They are a heavy offensive too, so we have to do a good job up front of collapsing the pocket. Their pass protections have gotten better… the quarterback has gotten more accurate… they are doing great things.”

Nick Saban mentioned on Monday that the team will start prep for the Tigers on Thursday.

While media personnel will be waiting to see Tua Tagovailoa (ankle) return to practice Wednesday for the first time since surgery, the defense for Alabama will continue fine-tuning things.