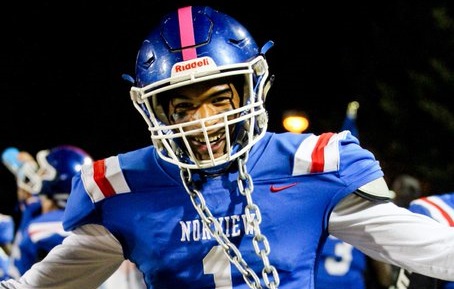 2022 4-Star defensive back, Daylen Everette, announced he received an offer from Alabama Wednesday via Twitter.

Everette is a product of Norview High School in Norfolk, Virginia. The Tide is the 23rd Division 1 program to offer the Virginia product and is the fourth program to do so this month. Everette said finding out the Tide offered him left him running with excitement.

“One of my coaches put in a word for me a few weeks ago and he called me this morning to let me know that they offered me,” Everette said. “I was very excited about it. I was running around the house for about 10 minutes after he told me.”

The way Nick Saban runs the Alabama football program as a whole is one of the things that stand out to Everette.

“I like it,” Everette said. “They are obviously doing something good there. They are one of the best teams in college football every year.”

Nick Saban is heading into his 14th season as the University of Alabama’s head football coach. With five National Championships at the Capstone, most rising prospects do not remember a college football world, where Alabama was not on top.

Everette’s offer list will continue to grow as a result of his play on the field. As a sophomore, he had 11 interceptions and made 32 tackles. A bigger junior season could be on the horizon for the 6-0 180 pounder as he continues to put in work while practicing social distancing.

“I have just been doing footwork drills, working on perfecting my craft and doing more off coverage,” Everette said. “Even though there is a lot that I cannot do, I try to do as much as I can.”

Alabama has a verbal commitment from one 2022 prospect and is looking to build relationships with others as multiple sophomores have reported Alabama offers over the last couple of days.